Update on the Arson of Sarah Palin's Church 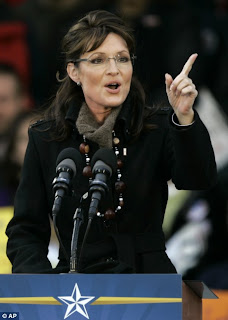 First and foremost, this is an outrage for the simple reason that someone tried to burn down a place of worship with people inside.

Secondly, this whole incident, and the treatment of it by the mainstream press, brilliantly illustrates the near-total corruption and death of the free press in this country.
The media template that is attempted to be foisted on us is that Sarah Palin: 1) is a moron who hurt John McCain's election chances, and 2) is widely recognized by "smart" Republicans-- creatures the media doesn't always acknowledge exist-- as unfit for office.
However, the actual facts belie this representation. 1) Palin is an articulate and charismatic politician who helped McCain's campaign effort, saving it from a McGovern/Mondale type disaster. Seriously, how many electoral votes would McCain have gotten without her? 40-50? No matter, he lost. But Palin caused the party's actual supporters-- those they call "conservatives"-- to have a reason to vote for the phony McCain. McCain was not conservative, and had a sketchy (at best) record on life issues. He supported taxpayer funding for cloning and killing little babies-- not exactly change we could believe in. Palin, a real pro-life candidate whom voters could see is genuinely pro-life, gave pro-lifers a reason to vote for the ticket.
As for 2), the fact that Palin can indeed be elected is evidenced by the absolute media blackout regarding her-- unless they can paint her in an unfairly negative light. She helped seal the deal for Saxby Chambliss in Georgia to prevent the Democrats from stealing a filibuster-proof majority in the Senate. She was the star of the Governor's conference in November. And she has been an effective and popular state governor for more than two years. Yet we hear nothing of this.
And now her Church was attacked by arsonists. There was a blurb, then silence.
Ask yourself, what coverage would we have gotten if the Obama's church were attacked by arsonists?
From Breitbart.com comes more information:
ATF: accelerant poured around Palin's church
ANCHORAGE, Alaska (AP) - Federal investigators in Alaska say an accelerant was poured around the exterior of Gov. Sarah Palin's home church before it was heavily damaged by a fire.
The Bureau of Alcohol, Tobacco, Firearms and Explosives said Monday that the accelerant was poured at several locations around the church, including entrances.
Federal Alcohol, Tobacco and Firearms Special Agent Nick Starcevic says laboratory tests will determine what the accelerant was.
The blaze was set at the main entrance of the Wasilla Bible Church on Friday evening while a small group, including two children, were inside. No one was injured.
Palin, the former Republican vice presidential candidate, was not at the church at the time of the fire but visited on Saturday.
Posted by thetimman at 9:48 AM

Sarah Palin has young children. She should be home raising them. Her maternal negligence led to her daughter getting pregnant out of wedlock.

She is a bad role model for Christian women.

Plus, she thinks and speaks in cliches and slogans.

Today's complex world needs top leaders who can think deeply, as the tragedy of the Bush presidency has shown.

I respectfully disagree with you on Sarah Palin being a bad role model. It is good and honorable for women to stay home full time and take care of their children, I do it myself. However, it must also be understood that some women are called to work outside the home, and may even be called to do it by God for the greater good of society.

If you read about your married saints, there were many who were called to work The most recent saint, mom of three under four, whom worked full time as a doctor even owning her own clinic was St. Gianna Moella.

Sarah's husband spends a lot of time with the two young children still left at home. As for the 18 year old daughter who had a baby, nobody but the family knows why she became pregnant. She is keeping her baby and marrying the father which is because of her mom's example on the value of life.

Did I miss something in this post? Where is the part about Sarah Palin as role model?

Meanwhile I wait with baited breath to experience the 'deep thinking' of our new leaders come January 20th.

Is thinking connected to memory? Our new leaders do not appear able to remember if they talked to the Gov. of IL or not! Imagine when they're confronted by something really serious.

Sorry but Sara Palin is a moron. She wouldnt know Russell Kirk from Kurt Russell. She's being promoted precisely because she is easily controlled, seduced and or manipulated. Her personal behavior is disgusting, I cant think of a more blatant example of sacrificing the well being of your family to your own ambitions. If she was a pro abortion democrat you would all condemn her behavior and rightly so. Stop letting others tell you who your heroes are and stop making excuses for others you wouldnt make for yourself.

LOL! Probably true, but not many do.

PALIN WOULD MAKE A GOOD COACH FOR A WOMEN'S BASKETBALL TEAM

I say to emphasize the positive, to acknowledge that she does have an excellent ability to speak and motivate people.

She's not an intellectual, but she's no dummy at the game of life.

So I praise Palin's genuine abilities.

BUT she isn't presidential material.

Maybe she should just get a conservative talk radio show, like Rush or Hannity. She'd be good at that too. Remember, her first job out of college was as a TV announcer/reporter.

Just not running the world from the White House, please!

Palin not an intellectual? Really?! It is just amazing how media spin can tarnish an intelligent politician like Palin. When the liberals and the biased media are afraid of a Republican they ALWAYS say they are 'dumb"!

Yes, only Democrats are smart and worthy of the presidency. Like Joe Biden saying that when the stock market crashed, ROOSEVELT spoke to the people on TELEVISION! Or Obama saying we have 57 states.

When media gets panicky about Republican, you know they have got to be good and smart!