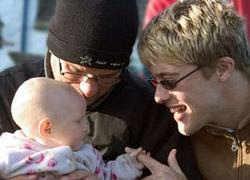 What is left of civilization in Britain worth saving? And, by singling out Britain, let me just say that it is a matter of quantity, and not quality. They are about ten to twenty years ahead of us, at most, on the road to perdition.
All kinds of things are wrong with this story, but suffice to say that taking children from a loving married couple and being given over to sodomites to be raised is as sure a sign of moral bankruptcy as can exist. Added to this immoral stew is the fact that the benign socialists in the government think that a couple aged 59 and 46 are "too old" to raise children.
From CNA:
British grandparents lose custody of children to homosexual couple
Edinburgh, Feb 3, 2009 / 06:36 am (CNA).- Two British grandparents aged 59 and 46 have been told that they are too old and unfit to care for their grandchildren, who are to be placed with an adoptive homosexual couple.
The children had been in their grandparents’ care during their mother’s struggles with heroin. After their mother failed to bring them home from a visit, social workers became involved and the police were called in.
The children, a five-year-old boy called “Josh” and his four-year-old sister “Chloe,” were placed in foster care, an arrangement the grandparents believed to be temporary.
The local adoption and foster council went to court four times to have the children permanently removed and adopted, but each time the court ruled in favor of the grandparents.
According to The People, the council threatened to hire expensive lawyers, causing the grandparents to abandon their legal fight because of the potential legal fees and because of their fear the court hearings would prevent the grandchildren from having a settled home.
The unnamed 59-year-old grandfather, speaking in an interview with The People, said the day the social workers came to take away his and his 46-year-old wife’s grandchildren was “the worst day of my life.”
“Chloe was still little and although we were saying goodbye and reassuring her we'd see her soon, I don't think she fully understood we wouldn't be putting her to bed that night and we wouldn't be there when she woke up. But Josh knew and he was howling. He was holding on to me and saying 'Please, Granddad, don't send me away. I want to stay with you and Grandma'.”
Two weeks ago they learned the children were to be adopted by a homosexual couple.
“"If we had known how it would turn out, that social workers would choose a home without a mother for them and we'd have to like it or not see them again, we'd never have given up the fight,” their grandmother said.
"The thing is they were so happy here. They knew they were loved and they were safe.
"They had all this countryside to play in. They loved going on the farm with their granddad. They'd see deer and badgers and all sorts out there.”
The children are now with a foster mother while they are gradually introduced to the homosexual couple.
The grandparents claim that social workers told them their access to the children would be restricted if they opposed the homosexual adoption, according to The People. Last week the grandparents were told they would never see their grandchildren again because they had made public the fact that the children were taken from them and to be adopted by two homosexual men.
[...]
Peter Kearney, a spokesman for the Roman Catholic Church in Scotland, criticized the adoption, saying:
"This is a devastating decision which will have a serious impact on the welfare of the children involved."There is an overwhelming body of evidence showing that same-sex relationships are inherently unstable and reduce the life expectancy of those involved."With this in mind, the social work department has deliberately ignored evidence which undermines their decision and opted for politically correct posturing rather than providing stability and protection.
"It is impossible to see how this decision is in the best interests of the children," Kearney remarked, according to The Scotsman.
Posted by thetimman at 9:57 AM

I had tears pouring down my cheeks as I read the horrible fate awaiting these children! We are currently going through an international adoption and NO country that we looked into accepts applications from single men. Convicted child molesters are 99.9% of the time men.

If homosexual couples are so normal and great, then why should these children's grandparents have not shouted the good news about them stealing their grandchildren?

It is because everybody knows that gay men are not more fit to be parents then loving grandparents.

I hope these grandparents take THEIR grandchildren to Canada or Mexico to save them.

Sick is an understatement! It's not like the children were being mistreated or not cared for! Why don't they wait until the grandparents are incapable of caring for their grandchildren before they take them away from FLESH & BLOOD! I fear for those poor children, may Mary watch over them as their Mother!

While I agree with you that there is so much wrong with this story, can I ask you refrain using inflammatory words such as "sodomite?"

Gay persons may think they fully understand where faithful Catholics are coming from, but words like that only serve to further isolate them from the Body of Christ.

doughboy, I understand your point, and I apologize if I offended anybody. I thought a bit before using the term, and in the end decided on it to emphasize the serious nature of the sin as opposed to a confused notion of lifestyle choice.

If I were posting the piece as more a of an apologetic piece, I wouldn't have used it-- true. So perhaps I should be consistent. I just really was upset at the thought of those poor children being taken out of their home to have an immoral lifestyle choice be the very milleu in which they were raised.

Good to hear from you, hope you are doing well.

Very horrible story. I haven't heard whether the grandparents are able legally (and financially) to pursue some further recourse. European courts don't normally allow the re-litigating and re-litigating that goes on in U.S. courts.