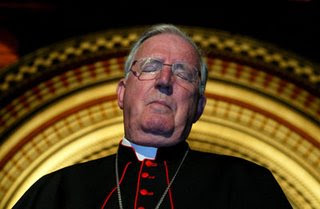 I am only waiting for confirmation of this story before I say that I am officially outraged.

Unbelievable!
When the Prefect of the Supreme Tribunal of the Apostolic Signatura, a Curia-level Dicastery, is not welcome in the Ordinary's Cathedral, tell me just what "full communion" as applied to the SSPX Bishops really means?
As I have posted earlier this week, there is OPEN REBELLION against the Holy Father in various parts of the Church--INCLUDING IN BISHOPS' CONFERENCES. This must be addressed.
From the UK Telegraph:
Cardinal Murphy-O'Connor 'refuses permission for Archbishop Burke to celebrate old Rite at Westminster'
Posted By: Damian Thompson at Feb 16, 2009 at 22:12:00
Cardinal Cormac Murphy-O'Connor has refused to allow Archbishop Raymond Burke, one of the Vatican's most senior prelates, to celebrate the traditional Latin Mass at Westminster Cathedral in June, according to authoritative reports.
The Latin Mass Society had asked Archbishop Burke, Prefect of the Apostolic Signatura and a former Archbishop of St Louis, to celebrate its annual solemn Mass. He had accepted. Cardinal Murphy-O'Connor, who is the bishop of Westminster Cathedral, has now reportedly forced the LMS to rescind the invitation.
Archbishop Burke, one of the Pope's right-hand men, is now welcome to take part in the ceremony but not to celebrate, I gather. This news is hardly credible - yet I have it on impeccable authority. I'm profoundly dismayed that the leader of the Catholic Church in England and Wales should take this step, at a time when Pope Benedict's enemies are trying to sabotage his liturgical reforms.
The chain of events is as follows. Last year, the Latin Mass Society invited Cardinal Dario Castrillon Hoyos to celebrate its annual Mass at the cathedral. This was the first time a cardinal had celebrated the traditional rite in the cathedral for 40 years. Neither Cardinal Murphy-O'Connor nor any of his bishops attended the service.
This year, the LMS asked Archbishop Burke to act as celebrant. He agreed. The Society had, however, omitted to ask formal permission from the Cardinal, imagining that this was not needed or a foregone conclusion.
On the contrary: the Cardinal is believed to have said that this invitation constituted a breach of etiquette. The Mass will now probably be celebrated by one of his auxiliaries. The LMS has had to go through the humiliating business of contacting Archbishop Burke in Rome and saying: "Sorry, but the invitation to celebrate is withdrawn."
What a shameful episode.
Posted by thetimman at 5:14 PM

Lord, help us!! Nothing else seems to be working.

Wow. I am speechless.

Should this be confirmed as true, the cardinal can be emailed, hopefully with humility and tact, at:

Perhaps emails from St. Louis, MO, will be apropos.

Shame on the Cardinal Murphy-O'Connor.

Some interesting story links on the family.

New Book: The Age of Aging, demographics are Changing...
http://angelqueen.org/forum/viewtopic.php?t=23423

God Is a Problem, Sources Say: how secular newsrooms handle stories with a religious component
http://www.freerepublic.com/focus/f-religion/2153257/posts

Indeed, as your picture suggests 'asleep at the helm'. Surely this 'breach of etiquette' is cause for such a ham-fisted response, eh? Sadly, in lockstep with the spiraling world zeitgeist.

I think I've commented on this blog enough by now that you know where my sentiments lay -- on the very conservative side. Let me also say, I anxiously await the day that Cardinal Murphy-O'Connor retires. He sure is making a mountain out of a mole-hill here. That said, I've mixed emotions on this.

On the one hand, my loyalties to Archbishop Burke make me want to decry this action by Cardinal Murphy-O'Connor. Especially because of Archbishop Burke's current position on the Apostolic Signatura.

On the other hand, shame on the Latin Mass Society. It was quite presumptious of them to not even request the permission of the local ordinary! I strongly support the Latin Mass, but one of the biggest tenets of many Latin Mass supporters (including myself) is, (to put it in the words of Fr. Z) "Say the Black, Do the Red," or more simply put, "Do it by the book, according to the rules." The Latin Mass Society ignored the rules here. They knew they needed the Cardinal's permission, and they chose (or at the very least, forgot) not to obtain it. This is Cafeteria Catholicism at its best - they chose which rule wouldn't apply to them.

While I agree that Cardinal Murphy-O'Connor is one known to bend the rules, and this is surely one place where he should have done it, the very people who want him to always follow the rules are now complaining that he did. I'm sorry, but you just can't have it both ways.

That is shocking to me, but it shouldn't be because of the political state Europe is in. Political correctness must come before common sense. Much as our socialist "Muslim" president Obama believes and is acting out with harmful legislation. Pray, pray, pray for people to wake up.

Hmm, I think that Cardinal is a little stuck-up; nevertheless, it was completely the right of the Cardinal to refuse Burke permission to celebrate Mass, however this refusal, though I think it strictly isn't bad, can raise certain questions among the non-Catholic Christians as this shows Catholics to be disorganized and not very reliant on one another. I think this calls for a firm handling, though I personally am saddened that such news had to get out; I would that the Cardinal had been more discreet and behaved in such a way that the Latin Mass Society didn't dare to invite Burke to bring this matter to a public head. It is unfortunate that Burke had to suffer this misfortune, but then again, the Cardinal should have made his feelings more clear earlier on and the problem wouldn't have even shown itself.

Read my new post on this to get my take on your point.

"nevertheless, it was completely the right of the Cardinal to refuse Burke permission to celebrate Mass, however this refusal"

I just reread my previous post. I can see that this sentence could easily be mis-intrepreted. What I meant was that there is no "law" or "rule" forbidding the Cardinal to refuse to let Burke celebrate Mass, I didn't mean that I approved of the Cardinal's decision.