Archbishop Burke Calls Out Randall Terry for Misusing His Interview 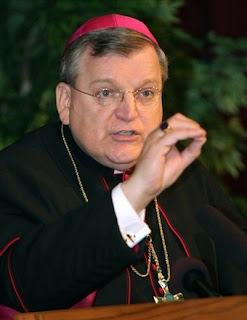 Whispers has the story. As some of my readers have pointed out, Randall Terry may have manipulated the Burke interview in an improper way. Who thinks so? Well, Archbishop Burke, for one:
ROME, Italy - In response to the March 25, 2009 press conference of Mr. Randall Terry in Washington, D.C., the Most Reverend Raymond L. Burke, Archbishop Emeritus of Saint Louis and Prefect of the Supreme Tribunal of the Apostolic Signatura, issued the following statement:
“Recently, Mr. Randall Terry and some of his associates visited me in Rome and asked to videotape an interview with me to share with pro-life workers for the purpose of their encouragement. The interview was conducted on March 2, 2009.“
Sadly, Mr. Terry has used the videotape for another purpose which I find most objectionable.
“First, Mr. Terry issued a media advisory which gave the impression that I would be physically present at the press conference during which he played the videotape, when, in fact, I was in Rome.
"Second, I was never informed that the videotape would become part of a press conference.
“Third, I gave the interview as a Bishop from the United States to encourage those engaged in the respect life apostolate, not as the Prefect of the Supreme Tribunal of the Apostolic Signatura.
“Fourth, I was never informed that the videotape would be used as part of a campaign of severe criticism of certain fellow bishops regarding the application of Canon 915 of the Code of Canon Law.
“If I had known what the true purpose of the interview was, I would never have agreed to participate in it.
“I am deeply sorry for the confusion and hurt which the wrong use of the videotape has caused to anyone, particularly, to my brother bishops.”
(Most Rev.) Raymond L. Burke
March 26, 2009
________________
I would not want to cross His Grace. It will be interesting to see where this one ends. Talk about diabolical disorientation-- the enemies of life, the enemies of pure doctrine, the haters of the Eucharist and the Church, all love it when there is dissension in the ranks.
Posted by thetimman at 10:04 AM

While deceiving a bishop is something repulsive, I have to wonder: If you consider the answers that the Archbishop gave, how is the criticism of his fellow bishops not merited? He even said that this is not a matter of opinion, so his answers are true.

I guess this is a matter of decorum amongst bishops?

I love Archbishop Burke. That's all I have to say.

seminarian for the Archdiocese of Saint Louis

Does anyone have an address where one can write a letter to Archbishop Burke in Rome, to thank him for the support and encouragement he has provided to many of us, and assure Him of our prayers.

It's obvious what happened. His "Brother" Bishops (probably His Eminence Roger Mahoney) were offended by his Catholicism.

This makes no sense.

What did Archbishop Burke expect? It's not like Randall Terry's reputation was a secret. I think you can take him out of the running for the successor to Pope Benedict.

TGL, There is the story of St. Thomas Aquinas' friends telling him that there was a flying cow. When St. Thomas ran to the window to look, his friends sneered and laughed. St. Thomas simply said, "I would rather believe a cow could fly than my friends would lie to me."

Honestly, in the beginning Randall Terry was a great pro-life leader. His rescues were peaceful and prayerful. I heard him preach many times and he gave some of the best anti-contraception talks I have ever heard. Rescue was a great pro-life movement and aome people sacrificed much. St. Louis has a interesting place in that history as does Missouri and Kansas. There were so many great things that happened and Rescue saved a lot of lives and brought about alot of conversion. At the time, Terry was not Catholic and some of the best people I know prayed for his conversion. He has converted but somewhere things just went wrong for him and his actions were puzzling to say the least. I watched some great pro-lifers try to help him. It is a sad story but not the first time that a talented God-fearing pro-life person has fallen. A cautionary tale that we should always pray for final perseverance and Randall Terry is also deserving of our prayers. Maybe it is also as one of my pro-life friends pointed out maybe this is why the pro-life movement doesn't get further in saving babies and winning minds and hearts. I agree I wouldn't want to cross Bishop Burke. Mostly, just because I believe him to also stand with Catholic teaching. Still, I think that if Randall Terry went running to Rome to ask forgiveness he would get it. I love Archbishop Burke.

"I agree I wouldn't want to cross Bishop Burke. Mostly, just because I believe him to also stand with Catholic teaching."

That was exactly the way in which I intended it, too.

I agree that the content of what he says is dead on. He in no way retracted WHAT he said, only that the interview was not used properly and that he was misled as to the purpose for which he intended it, thus causing embarrassment to his brother Bishops.

This interview still, rightly, calls them out on the issue of fidelity to Christ and respect for His Body, Blood, Soul and Divinity in the Eucharist.

And, TGL, time will tell if His soon-to-be-Eminence ever walks out on that balcony to the refrain of "Habemus Papam"...

I was surprised that Archbishop Burke would give an interview to Randall Terry, not that anything Archbishop Burke said was wrong in any respect, just that I think it could be expected (given Mr. Terry's activism and secular political involvement) that the interview would be exploted by the recipient of the interview. Perhaps too the Archibishop would not want to believe that someone so strongly pro-life as Mr. Terry would exploit the interview in the fashion as did occur. As we have recently seen, members of the Catholic hierarchy, in leading lives of fidelity to the Church and the Magisterium, probably don't have the time or inclination to learn all that can be known from the internet as so much of it irrelevant to their Christian lives. I think perhaps this occurred again; Archbishop Burke simply could not imagine that Mr Terry would have acted in this fashion after having been granted the privilege of the interview.

Can someone please fill me in on what Mr. Terry did wrong here? I am mystified by the whole thing. A.B. Burke (for whom I have great love and respect) granted an interview. That interview was made public. Where is the problem? In my opinion these bishops need to be prodded a bit. They are neglecting their jobs. He called them out on it. What am I missing?

I read some snippets here and there and did some googling. Randall Terry is trying to get Abp. Weurl (DC) and Bp. Loverde (NoVa) removed for not refusing communion to pro-abort pols who live in their DC area dioceses. Terry was recently at the Vatican to have a meeting on this issue. Terry showing this at the NPC in DC this week was to further his goal of deposing the 2 bishops. Abp. Burke would of course have none of that. That is why Abp. Burke had to put out a statement. That's what I've gathered. It makes sense to me. The Obie "Republican" who seeks to silence Abp. Burke is a separate and additional concern.

Randall Terry indicated to Bishop Burke that this interview was to be used to encourage pro-life workers in America. Randall Terry turned around and used it at a press conference where he indicated in advance that Bishop Burke would be physically present. While Bishop Burke gave the interview as an American Bishop, Randall Terry said Bishop Burke was speaking in his position of the Prefect of the Supreme Tribunal of the Apostolic Signatura. He also used the remarks as part of his campaign to call for the removal of some of the Catholic heirarchy in America. This kind of mob rule to dispose of Bishops isn't exactly something in line with the structure of the Holy Catholic Church.

Randall Terry's ways weren't good, but he is correct in the fact that the bishops should be removed. Not by the people, but our dear pope.