Bishop Fellay's Response to the Letter of the Holy Father 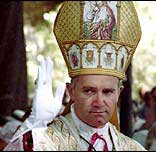 Communiqué
of the Superior General
of the Priestly Fraternity of Saint Pius X [FSSPX / SSPX]
Pope Benedict XVI addressed a letter to the Bishops of the Catholic Church, dated March 10 2009, in which he made them aware of the intentions which guided him in this important step which is the Decree of January 21, 2009.
After "an avalanche of protests was unleashed" recently, we greatly thank the Holy Father for having placed the debate at the level on which it should take place, that of the faith. We fully share his utmost concern for preaching to "our age, when in vast areas of the world the faith is in danger of dying out like a flame which no longer has fuel".
The Church lives, in fact, through a major crisis which cannot be solved other than by an integral return to the purity of the faith. With Saint Athanasius, we profess that "Whoever wants to be saved should above all cling to the Catholic faith: whoever does not guard it whole and inviolable will doubtless perish eternally." (Quicumque Creed)
Far from wanting to stop Tradition in 1962, we wish to consider the Second Vatican Council and the post-Conciliar magisterium in the light of this Tradition which Saint Vincent of Lérins defined as that "which has been believed everywhere, always, by all" (Commonitorium), without rupture and in a perfectly homogenous development. It is thus that we will be able to contribute efficaciously to the evangelization asked for by the Savior (cf. Matthew, 28,19-20).
The Priestly Fraternity of Saint Pius X assures Benedict XVI of its will to address the doctrinal discussions considered "necessary" by the Decree of January 21, with the desire of serving the revealed Truth which is the first charity to be shown towards all men, Christian or not. It assures him of its prayers so that his faith may not fail and that he may confirm all his brethren (cf. Luke 22 32).
We place these doctrinal discussions under the protection of Our Lady of Trust, with the assurance that she will obtain for us the grace of faithfully delivering that which we received, "tradidi quod et accepi" (I Cor. 15,3).
Menzingen, March 12 2009
+ Bernard Fellay
___________________
Very encouraging reply. If only more Bishops in good standing expressed such sentiments, we would have a healthier Church. The money quote-- concerning the Second Vatican Council in light of tradition-- is the best part. Reconciliation on these terms is honorable to both sides and is indeed possible, if the saboteurs are not allowed to kill the process.
Posted by thetimman at 4:33 PM

In the text quoted by this blog, Bishop Fellay said: "The Church lives, in fact, through a major crisis which cannot be solved other than by an integral return to the purity of the faith."

Bishop Fellay has made clear again and again that the cause of this crisis is erroneous/dissenting/possibly heretical teaching by Benedict XVI (also as Card. Ratzinger) and John Paul II.

In short, the "crisis" in the Church was caused and is being perpetuated by the top Vatican leaders, including the popes.

In short, he and the SSPX bishops are saying, at the very least, that John Paul II was one of the most sinful, soul-harming popes in the history of the Church.

I point this out just so no one will suppose that any easy reconciliation is about to occur.

The SSPX are confident that it is Benedict XVI, Cardinal Mahoney, and the great mass of bishops who must repent and return to the "purity of the faith," NOT the SSPX bishops.

From their point of view, they are carrying out a missionary operation to the Vatican.

All I'm saying is that Bishop Fellay's comments now must be read in light of what the SSPX bishops and priests have been writing and preaching for the last 35 years or so.

Many blogs and newspapers give the impression that the SSPX are on the verge of becoming just another Traditional Mass order of priests on par with the Insitute of Christ the King.

I don't think so.

They see themselves as Luke Skywalker trying to save his father, Anakin Skywalker (Darth Vader) in Episode VI of the "Star Wars" film saga, aka, "Return of the Jedi."

Just thought this should be said, for clarity.

Javier, I have to disagree. Fellay has never said either Pope taught heresy. Indeed, they cannot. The SSPX has been critical of many prudential decisions of the modern Popes, and believe that the documents of the Council are most easily read in a way that is contrary to the timeless teachings of the Church. That is why the "hermeneutic of continuity" is the the only way to reconcile pre-conciliar and conciliar formulations. Admittedly, this is sometimes hard to do, but it must be possible or else the Holy Ghost would not be protecting the Church.

Timman, thanks for your correction.

You may be right in saying that Bishop Fellay or the other SSPX bishops have never said that Vatican II era pope actually taught heresy.

Also, even if they did accuse them of teaching heresy in the past, it might also be the case that they are now moderating or revising their position in light of the Tradition-friendly initiatives of Pope Benedict XVI.

But, even so, in general, I know I have seen, over the past 15 years, some very, very VERY harsh and condemnatory criticism of the writings and speeches of Pope Benedict (and also as Card. Ratzinger) and Pope John Paul II in the books and magazine sold by Angelus Press (a SSPX publishing house)

In short, the SSPX acknowledges the post-Vatican II popes as valid popes, but they have not hesitated to say that these popes have badly harmed souls by leading people away from the "purity of the faith" (to quote Bishop Fellay).

Once again I am not 100% certain, but I believe that the SSPX holds that the Vatican II Era doctrines and practices associated with "ecumenism" and "inter-religious dialogue" are actually inherently wrong, cannot in any way be "reinterpreted in light of Tradition," and simply must cease.

They would say, I think, that the Catholic Church has always had just one manner of dealing with pagans, heretics, and schismatics, and that was preaching and teaching designed to bring them into the one and only real and legitimate Church, the Catholic Church.

I think it is true that in since Vatican II, no pope has ever told Jews, Protestants, or Eastern "Orthodox" to convert to the Catholic Church so that they may have the surest path to Heaven.

(Can anyone find any statement from any Vatican II Era pope in which such non-Catholics are urged to convert to the Catholic Church so that they may have the surest path to Heaven? I'd love to be made aware of such a statement, if it exists.)

Instead, the Church in this Vatican II Era seems to confirm such non-Catholics in their present status, and then engages in dialogue intended to foster friendship and cooperation, NOT conversion to the Catholic Church.

By contrast, Pope Pius XII did tell them exactly that (in his encyclical "The Mystical Body of Christ"), and so did all preceding popes.

Correct me if I'm wrong.

Thank you for a nice blog.

1. In 2006, Stephen L. M. Heiner of the Remnant Newspaper interviewed Bishop Bernard Tissier de Mallerais of the Society of St. Pius X. Here are some excerpts:

The bishop then goes on identify the specific heresies he says Ratzinger taught. You can read the whole thing at:

2. The SSPX web site for their Asia district has these texts:

a. "Ratzinger maintains, while repeating his "masters"' old party-line, that this monistic-pantheistic delirium, quite apart from "Pauline Christology" (as interpreted by Teilhard de Chardin), can be found in the "most ancient professions of Faith" as well as in St. John's Gospel and would make "clear" to us the true "meaning" of the Dogmas of Ephesus, 431 A.D., and of Chalcedon, 451 A.D. This affirmation constitutes in itself another heresy."

b. "Thus is Ratzinger caught in the act of repudiating both Catholic Tradition and the Magisterium as he "quietly" (to use one of his favorite terms) "continues to go his way on the path of whims, error, and heresy." This path, in fact, is nothing else but that highway back to that modernism previously condemned by Pope St. Pius X which "recognizes in Jesus Christ nothing more than a man" even though "of a very high nature such as had never before been seen nor will ever be found in the future."

These two quotes are from online article titled, "CARDINAL RATZINGER: A PREFECT WITHOUT FAITH AT THE CONGREGATION FOR THE FAITH"

I, your ever so humble blog comment poster, am not saying that Joseph Ratzinger taught heresy. I am only saying that the SSPX says that he did teach heresy at least in the past.

Many Traditional Mass attending Catholics seem to think that the only problem in the Church is bad liturgy, and that all that is needed is better liturgy.

The SSPX has never taken that view.

And Pope Benedict, by transferring the Ecclesia Dei commission to the Congregation for the Doctrine of the Faith has acknowledged that for the SSPX the problem is one of doctrine.

Bps. Tissier and Williamson did say strong things against Father Ratzinger's early work, but have never accused him of heretical teaching as CDF Prefect or as Pope. I think all the Bishops, and Fellay in particular, are not wont to dwell on anyone's past public political posturing as the process goes forward.

I think that we should focus on the task at hand and not on words spoken years ago-- doubtless meant at the time, but not the most prudent and perhaps words the parties wish unsaid.