I'm Just Doing What Planned Parenthood Wants Me to Do 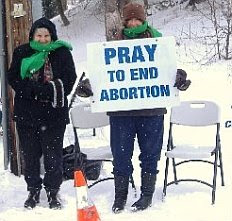 The local baby-killing machine that is Planned Parenthood has launched a new initiative on its website. They are asking people to "Defend the Truth!" I don't know what they mean by "truth", but I speak a little English, and I think I can figure out what it means. What's more, I want to help.

Apparently, the 40 Days for Life Campaign is bothering them juuuuuuust a little bit. The purveyors of death state that there have been "expenses" incurred by the "increased protest activity" at the abortuary. What these expenses are, I cannot say. Are they hiring more "counselors" to hurry misguided women into the mill before the prayerful witness of those brave pro-lifers who love the mother and the child can change these victims' minds? Are they giving more donuts to their "security" guard? Perhaps the increased expense is for the money paid to that graphic artist who designed their super-girl style "heroes" art to depict women as trying to drum up business for Planned Parenthood the morning after. I don't know.
Whatever their reasons, they of course want more money to help continue their gruesome business. I can't help them with that, as I don't want to go to hell.
However, I am delighted to Defend the Truth! as follows:
1. The baby inside the mother's womb is a real human person, with an immortal soul; he deserves protection from the moment of conception.
1a. Science has shown that no human fetus has ever developed into a duck, or an aardvark, or anything other than a human being.
1b. Though some persons, through very bad education and poor moral choices, unfortunately will sometimes grow up to be Planned Parenthood supporters, they still have the right to life.
2. At abortion mills, babies are brutally killed, destroyed, eliminated and discarded.
3. Planned Parenthood makes money, at least in part, from killing unborn babies.
4. The mothers who are to greater or lesser degrees culpable are yet also victims themselves of these violent acts. They need our prayers.
5. The 40 Days for Life Campaign is doing wonderful work in a prayerful and peaceful way, and poses no threat to Planned Parenthood, their employees, or their "clients", other than perhaps to their wallets, as mothers choose life based on their witness. They, too, need our prayers.
See, Planned Parenthood, I Defended the Truth! Hope you like my little effort on your behalf.
Let us pray for the continued success of the 40 Days effort, pray for an end to abortion, and pray for conversion of hearts to God and a fundamental respect for human life.
Posted by thetimman at 2:58 PM

I think the job of pro-abortionists is to ignore the truth!

I encountered a pro-abortionist ultrasound technician yesterday that blew me away with her propaganda.

When I pointed to my 8 week old baby and said, "Look, I can see the arms and legs!" She said,"Those aren't arms and legs, IT is just a bunch of cells." (By next week my BABY will have fingers and toes)

The sad thing is, she is in the position to influence minority women, whom are inclined for abortions.

It would be almost laughable if it weren't so sad: "Planned Parenthood is prepared to defend you - our clients - from intimidation and harassment..." Wow, I was there but missed all the excitement. Must have been when we were praying: afterall, prayer would be considered intimidation and harassment by the evil one. Somehow the site of a prayerful vigil outside calls even more attention to their dirty little secrets that are performed behind prison-like walls. So sad, so in need of our prayers. The time grows short and we need to pray for the salvation of all souls. God forgive and help us all!

Excellent. I will also defend the truth and spend the next year devoted to praying for an end to abortion in our country!