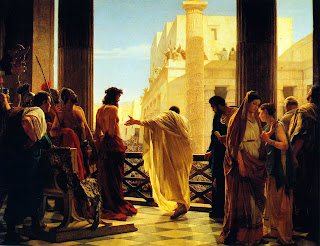 The UK Telegraph reports that some opponents of California's Proposition 8 have decided to publish a site that contains the names and addresses of every single person who donated money to the Proposition 8 campaign. Ironically, those publishing this site have elected to remain anonymous.

The time has come when standing up for the truth will entail a very practical price, and those enemies of God and the natural law will not hesitate to use means fair and unfair, moral and immoral.
This is where political discourse has come to in our country. One cannot support a cause, vote for a ballot proposition, or have incorrect opinions without facing intimidation and veiled threats of violence from the enforcers of "tolerance".
I am reminded of the entry for the First Station of the Cross in the version written by Plinio Correa de Oliveira:
"The judge who committed the most monstrous professional crime in all history was not impelled to do so by the excitement of any burning passion. Nor was he blinded by ideological hatred, by craving for new riches, or by the desire to please some great potentate. He was moved to condemn the Just One by fear-- fear of losing his position for apparent lack of zeal for the prerogatives of Caesar; fear of causing himself political complications by having displeased the Jewish mob; and the instinctive fear of saying no, of doing the opposite of what has been asked of one; of facing the crowd with attitudes and opinions different from those that prevail there."
Will we have the courage to have different opinions, to face the "crowd" and have them know we stood with Christ? Or will we wash our hands, as we have all done so many times? May God's Grace give us strength in the days ahead.
Posted by thetimman at 1:11 PM

I've been marginalized since after VII. I notice since I am getting much older I am also getting very weary, very tired. It would be easy for me now to just throw in the towel and "join the crowd". God grant me the grace to persevere to the end and to never deny Him, no matter what.

Is it getting, or has it gotten, much worse since the first of the year or is it just me?

Well now you know how Bishop Williamson feels. Honestly I dont see anything new here at all. The American Government has been this way for as long as anyone living can possibly remember. Next time your in DC take a look at the temple of Lincoln and see how they've enshrined a man who brutally and viciously crushed any and all who dared to dissent. So what else is new?