Schism is an Ugly Word 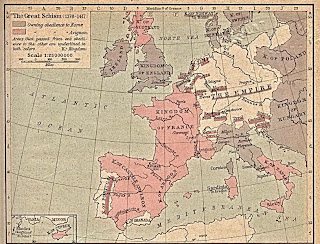 I make no predictions in matters ecclesial. I simply don't have the knowledge, the wisdom, or any direct line from God. I do pay attention to events, though. And what follows is simply a timeline of noteworthy Church events since the lifting of the SSPX excommunications and the duplicitous, contrived "uproar" by the Church's enemies that followed:

All the while, the press coverage of the Holy Father has been savage. It is never supportive, but now it is especially vicious. Many, many stories against the Pope are supported by quotes and interviews from Priests, Bishops and self-identified Catholics who show no hesitation to rip into the Pope.

Anyone can read these events as he wishes.

For documentation of this timeline, just read the archives for the last 45 days on this blog and on Rorate Caeli.

And, the Notre Dame debacle to boot.

FIFTY PERCENT OF PRIESTS & BISHOPS ARE ALREADY IN ACTUAL SCHISM

2. Last Sunday the priest at my local Novus Ordo parish brazenly and unapologetically preached the Lutheran heresy on salvation based on faith alone.

I was tempted to question him about this, and then, perhaps write a letter to the bishop.

But I'm giving up on that. My letters to Abp. Rigali, Abp Burke and Bishop Hermann all accomplished nothing.

Just a waste of time. The heretics just always claim it was all a big misunderstanding.

Plus, the new Vatican II doctrine and practice of "collegiality" among the clergy means that bishops must take a hands off approach with priests, except in the most clear and extreme cases.

3. My estimation is that about 50% of "Catholic" priests and bishops in American and Europe are not Catholic because they have been automatically excommunicated due to their heresy.

To be a Catholic you must hold the Catholic faith. There are no exceptions.

The new term "dissent" is mostly just used by people who don't believe that heresy is possible anymore in the new Age of Ecumenism, in which we are all one now, fellow pilgrims on a journey to the truth that will be discovered someday, or so they say.

4. All these attacks on Benedict XVI by priests and bishops are motivated by their intense desire that heresy rather than orthodoxy should continue to triumph as it has for the last 45 years.

5. Heretics are automatically schismatics too.

6. So the great new schism that our Honorable Blogmaster fears is, I respectfully submit, already here, and has been here for about 45 years.

It just is mostly unseen and unrecognized.

7. The first thing each of must do is make sure we are orthodox in our beliefs.

8. Then we must resolve to live our lives in a holy manner, in accordance with our station or vocation in this life.

For most of us, that does not mean the practice of the Evangelical Counsels.

9. I further advise everyone to go to one of the Traditional Latin Masses in St. Louis.

The priests associated with the traditional mass tend to have a holy hatred of heresy, per the long history of Church Militant.

They tend to hate the new idea of the Detente Church, Peace Church or Ecumenical Church that so many priests tend to be enraptured by.

9. In sum, "the schism is now." But Christ and his Church are faithful, and as necessary as ever.

There is no salvation outside of the Church. Extra Ecclesiam Nulla Salus.

Javier, I don't think you can throw around terms like "fifty percent of all priests and bishops". You have to have some real evidence to make such a broad claim. Otherwise it is unfair.

I agree with many of your underlying points, but it is dangerous to state with certainty what is in the mind and heart of others. It is enough to say that examples of dissenting priests and bishops are easily found, and leave the exact numbers to God.

We need to pray for them, and for us.

'Tis true, I have no idea how many bishops other than Cardinal Mahoney are heretics.

I just will go to the Traditional Latin Mass and, like Dante Alighieri, imagine the heretical priests and bishops--however many there are--being in Hell forever, unless they repent before the die, which I hope they do.

Tim: What do you make of it?

You know, Tim, I've been with this since the beginning and I keep thinking how it could possibly get worse. But it does. Your "time-line" shows how bad things really are. The post-VII errors are deeply rooted, and many are hardened in their position. Compound that with a few generations of truly ignorant and apathetic "Catholics" and it all makes for chaos.

I hope His Holiness knows that some of the faithful are on his side.

You could all stand to read Archbishop Wuerl's recent column: http://cathstan.org/main.asp?SectionID=14&SubSectionID=79&ArticleID=2349&TM=44340.1

Quit thinking you have the right answers and that everyone else is wrong. Don't forget Christ's lesson about tending to the plank in your own eye first. You come across as worshipper of the church rather than God.