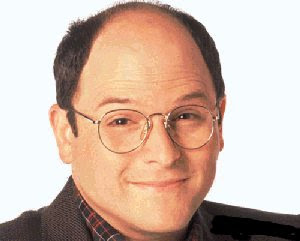 The much beloved George Costanza (for you traditionalists out there, he is a character on a program that used to air on this invention called television-- you know, the box with images and sounds that provides a window seat on your express flight to hell?) once lamented that his friends were causing his worlds "to collide". How? By his friends bringing his fiancee into their intimate circle. You remember, Relationship George would kill Independent George?

Well as a thought experiment, I thought I would try to mix two of my worlds together--Catholicism and political matters-- to provide a new lexicon. Take these examples already in existence in the world of politics:

Well, what would happen if you brought that kind of labelling into Catholic matters? Consider these helpful labels:


This is just a partial list. Let's hope they can be more useful than the tired stand-bys like Trads, Neo-Trads, Rad-Trads, N.O.ers, Neo-Caths, Sedes, and just plain nutjobs.

If you think of others, feel free to add them in the combox.

Posted by thetimman at 5:36 PM

There is a wonderful line in one of John Wayne's last movies, "True Grit". A determined young girl, named Mattie Ross asks her frontier hosts as to whether they are "Cumberland" Presbyterians or regular Presbyterians. At the table is a Texas Ranger played by Glen Campbell who interrupts and says, "I'm a member of the Episcopal Church of Virginia".

Mattie Ross cuts him to the quick with the words, "I figured you for some kinda 'kneeler'."

For twenty years I've wanted a context in which to mention that line. Thanks to Tim I have finally found one.

So, we can add this to our list. There are the Catholics who have torn out the kneelers from the pews and are thus "standers". The rest of us are along with the Texas Ranger, "kneelers".

Very good! Myself, being one of the Traditional [Latin] Roman Catholics,
a.k.a.=

"Catholics Regular": practicing proper religious diet and exercises, dependability in output, neither bound up tightly or out of control, rejecting "junk" foods and other poisionous intake, and remaining true to a good and holy lifestyle through the daily practice of The Faith and not the neglect of my soul.

What is so terrible about wearing jeans to mass?

Anonymous, you've just opened a whole 'nother can of worms with that question!

I have worn jeans to mass a couple of times and I did feel out of place.

Christers = They show up for mass on Christmas and Easter.

Do you jest? If you were going to a wedding would you wear jeans, or to a fancy restaurant?

Why would one not find Jesus Christ worth dressing up for??!!!

I'm just going to add that the "window seat on your express flight to hell" comment just killed me.

That's pretty much how a lot of people around here look at you when you dare to mention you were watching college football on your "box with images and sounds."

Joe Paterno is intrigued by your ideas and would like to subscribe to your newsletter. . . as long as that newsletter is printed on paper rather than only accessible through that series of tubes that the rest of us know affectionately as the internet.

Anon--
Don't mess with my emotions! For Papa Joe Paterno, I'd pretty much pony express it to him.

Yes, I have worn jeans to a fancy restaurant and did not feel out of place at all. I was not the only one wearing jeans. This morning I counted the number of people wearing jeans at mass. About have the congregation. Others wore corduroy and chinos.

Also, jeans come in different styles, some of which are quite fancy. Fancy or not, I don't believe Jesus cares what we wear. It is other human beings that care what others wear.

The worker coming from the factory straight to mass should not have to be concerned about his attire, nor should the hospital worker who stops to worship during a break or just before/after a rotation.

Someone wrote:
"Going to mass should be the highlight of our week, and we should dress as if we are standing before Jesus Christ Himself!" We stand before Jesus every day, every moment of our lives, not just once a week.

And there are those who attend daily mass. They come in work clothes, leisure clothes, gym clothes. I just cannot believe that Jesus or his Father is disappointed that these people did not "dress up" for mass. That they attend daily should be the focus, not their attire.

In reference to the "Tableclothers"
definition:

What would have been worn before the gothic tradition?

What was worn before the baroque chasuble?

The gothic chasubles of the middle ages were beautiful, too. For some pictures of modern-day companies who make neo-gothic chasubles of beauty, see the advertisers along the side of the New Liturgical Movement blog-- it is linked at my site.

I have no formal theological / liturgical training, but have been an active, practicing Catholic my entire life, for whatever that's worth to the context here. Out of curiosity, what are your concerns with the "Gatherers" songs? It seems like there's some kind of inside joke there, but I'm not catching on to what it is! I really would appreciate you expanding there. Thanks!

What would have been worn before the gothic tradition?

What was worn before the baroque chasuble?