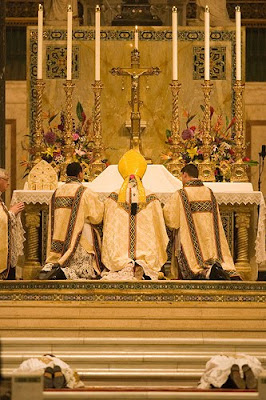 OK, I jest. But imagine my delight tonight when I saw on the Institute of Christ the King's YouTube page this video clip of portions of the historic ordinations of Canons William Avis and Matthew Talarico by His Grace Archbishop Burke at the Cathedral Basilica of Saint Louis in June 2007.
Three years after Summorum Pontificum, the whole situation of the traditional Mass in the life of the universal Church is light years ahead of the situation under the old "indult" scheme. Thus it might be hard to imagine just what a hugely important event this was. In no particular order of importance:
1. This was the first priestly ordination in the traditional rite (outside of Lincoln, NE--thanks, David) by a reigning ordinary of a diocese in the See of the diocese since at least the earliest of the 1970s. It was a huge statement made in favor of the ongoing vitality and liceity of the traditional Mass and sacramental forms by a Metropolitan Archbishop on behalf of a society dedicated to these traditional forms.
2. This event was before the motu proprio. Archbishop Burke's actions, in retrospect, seem perfectly obvious, but at the time it was a very bold move indeed.
3. This holding of the ordinations in the Cathedral of the Archdiocese really put the Institute "on the radar" in the United States in a way it hadn't yet been. It also cemented the status of the Archdiocese of Saint Louis as the most tradition-friendly diocese in this country, and perhaps the world.
4. It is hard to say that any one Mass is more momentous than any other--ontologically they are exactly the same, and aesthetically or otherwise there have been many "statement" or "watershed" Masses. But for me personally, and many of the seven readers of this blog, it was the most moving and inspirational Mass. It was historic-- it felt historic-- and was unspeakably beautiful.
I mean that Mass was roughly four hours long, and it seemed short. One very vivid memory I have (not seen on the video) is of the huge vertical space of the Cathedral being the setting for an amazing sight. From the floor up to fifteen feet was clear air. Beginning at about fifteen feet, and at least fifteen to twenty feet high, was a blanket layer of incense hovering, seemingly motionless, over the proceedings. Above that, clear air all the way to the glorious mosaic encrusted dome. Very striking.
5. This Mass was the second public traditional Latin Mass in the Cathedral in the previous 35+ years. The first was three months earlier, when the Institute did a "dry run" Mass on the Feast of St. Thomas Aquinas. That Mass, on a weeknight in Winter, drew a very respectable attendance of 500 faithful, but in the cavernous Cathedral it seemed light. So no one really knew what to expect for the ordinations. The size of the congregation was extremely important at a time when all were hoping and praying for the motu proprio that thankfully was promulgated, in the face of the typical criticism that "nobody wants the old Mass".
The actual turnout was an unqualified success, drawing a capacity congregation of roughly 1,300 people. The place was packed. On the video, the only real shot of the pews comes at the recessional, where you notice that some people did leave prior to the end--not surprising when you consider the length of the Mass and that people did not know what time frame to expect. Also, the Mass was in the middle of a weekday, yet the Cathedral was filled. It was like a dream come true for so many who suffered through the desert for 35 years. I cannot imagine what they suffered all that time.
6. People came from all over the country. It was like a pilgrimage for many. I received a ton of great mail at this blog during the run-up to the Mass, and afterwards, too. In addition to satisfying traditional Catholics who knew the Mass, it was a very positive and public introduction to the classical liturgy for those who had never experienced it.
7. Also, this Mass cemented a collaboration between the Institute and the Archdiocesan clergy that had begun before, and has flowered since. The two groups showed that there was no need for rivalry, but cooperation. The Archdiocese and the Institute have cooperated to integrate the traditional liturgy into the formation of the Archdiocese's seminarians. They have helped to train and support Archdiocesan priests and other clerics to celebrate the liturgy in diverse places. St. Louis remains, even after the promotion of Archbishop Burke, a leader in the integration of the traditional Mass into the life of the Archdiocese. Of course there is always progress to be made, but credit should and must be given where due.
8. Finally, as someone who attends an Institute apostolate, the event, bracketed by celebrations before and after at the Oratory itself, really brought home the feeling of belonging to a family. Members of the Institute from Gricigliano and other apostolates all converged in St. Louis. Many seminarians were hosted by Oratory families. We got to know them, and they got to know us. It solidified the unity of this place, and made tangible what we knew intellectually. And it was a lot of fun.
So, yes, I am glad to link to this video. If you weren't there, it doesn't quite satisfy, except to see the beauty of the Cathedral and the Mass so compatible with each other. But if you were there, it will be a little bouquet of a very happy memory.
Enjoy.
Posted by thetimman at 10:40 PM

There was a sizable CA contingent who went to St. Louis that year. I'm sure this will bring back many good memories. How time flies! I remember meeting the new Father Avis when he came to say First Mass, and Abbe Apple when he was a seminarian. Sure can't wait for the next batch of new priests!

I think you're incorrect about your first point:

I think Bishop Bruskewitz has ordained plenty of FSSP priests in his own cathedral.

Magnificent! Thanks for making this available.