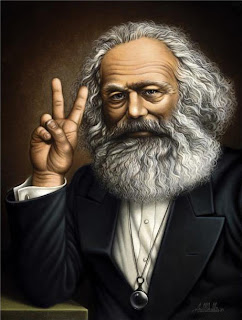 There are only two possibilities: 1) this store will last 6 weeks, tops; or, 2) people really are saps.
In our little suburb of Clayton, Panera Bread Co. is opening a not-for-profit restaurant that allows people to get whatever they want to eat and pay whatever they think best. They can literally pay nothing. Experience has shown that there are many people who are comfortable getting something for free if other people pay. Communism has yet to succeed; our country is proving this again.
Perhaps you should line up for free breakfast and lunch before the party's over.
The story from MSNBC:
Panera cafe says pay what you want
Bakery hopes to expand nonprofit restaurants around U.S.

May 18, 2010
CLAYTON, Mo. - Panera Bread Co. is asking customers at a new restaurant to pay what they want.

The national bakery and restaurant chain launched a new nonprofit store here this week that has the same menu as its other 1,400 locations. But the prices are a little different — there aren't any. Customers are told to donate what they want for a meal, whether it's the full suggested price, a penny or $100.

The new store in the upscale St. Louis suburb of Clayton is the first of what Panera hopes will be many around the country. Ronald Shaich, Panera's CEO until last week, was on hand at the new bakery Monday to explain the system to customers.

The pilot restaurant is run by a nonprofit foundation. If it can sustain itself financially, Panera will expand the model around the country within months. It all depends on whether customers will abide by the motto that hangs above the deli counter: "Take what you need, leave your fair share."

Panera hopes to open a similar location in every community where it operates. Other nonprofits have opened community kitchens, where customers set the price, and the idea has spread among food enthusiasts and philanthropists. But Panera brings new scale to the idea — its community restaurants will use the company's distribution system and have access to its national food suppliers.

The first location bears the name St. Louis Bread Co. Cares — the chain's former name and one it still uses in its hometown. Customers seemed alternately puzzled and pleased by the concept.

Dawn Frierdich, 52, came in to buy three loaves of bread and an iced tea. She asked how much the drink would cost.

And the whole order?

"It would be, like, $12," Miller told her, reminding her she didn't have to pay if she didn't want to. Frierdich tried to hand him $12 in cash, but he directed her to put it in the donation jar.

"This is a little hard. I just can't wrap my head around this," Frierdich said.

A young man spoke on his cell phone nearby. "Seriously," he said. "They don't charge tax or anything."

The clientele at the Clayton location is a mix of well-to-do attorneys and bankers from Clayton, as well as lower-income customers who work nearby or are visiting the sprawling St. Louis County offices and courthouse nearby. Miller, the cashier, said most customers paid full price for their meals Monday, but some took a discount of a few dollars, or paid half-price.

Saich was CEO of Panera until he stepped down Thursday, taking the post of executive chairman. He will run the nonprofit along with other projects for Panera.

Other similar experiements have worked. The One World Salt Lake City restaurant has operated as a nonprofit with pay-what-you-want prices since 2003, said founder Denise Cerreta. She works for a foundation that helps similar restaurants open around the county. She said the places don't get swarmed by crowds and emptied, but have managed to stay afloat based on the honor system.

"It somehow stays in balance," Cerrata said. "I think ultimately people are good. They want to contribute."
Posted by thetimman at 10:44 PM

What a joke! I sincerely hope that NOBODY pays anything. That would teach those idiots to realize that many people will take a free handout, and the ones who won't, don't want to pay for the takers!

Line up everybody - free food for all at Bananers! Only suckers (i.e. rich people) need pay for the everybody else. We all must remember to spread-the-wealth-around.

P.S. Don't dress well or you may get asked to donate more than your share. In fact, all those who gross more than 60K should pay for all the rest who are at the Bananers at the time. Stupid rich people got their nerve thinking they shouldn't support us.

One more thing: How about the honor system for buying a car? I need a new one and don't feel like I should have to donate. That rich lawyer can pay for my car, or the rich carpenter, or mechanic.

Reminds me of the coffee and donuts experiment of 2008.

A relative involved in marketing observed that this stunt (?) is great for visibility...

The focus of subjectivity is a distorting mirror.
Hans-Georg Gadamer

I must really be off my rocker, but I do not see the danger in this or its relevance to Communism or its ancillary beliefs. Is the problem that this initiative is from a corporation or from this specific corporation? Or is the problem that an entity (corporate, individual or otherwise) is offering "self-pricing" of products? To me this seems more akin to soup kitchens and similar efforts than to Communism.

How dare those Commies, making a business decision that dares to appeal to humanity's better instincts.

Shame, ridicule and curses upon their corporate heads.

While we're at it, let's help bankrupt Paneras by grabbing as much free stuff as we can - that'll show 'em!

Seriously Timman:
Do you people realize how small-minded and bitter you appear when you make posts like this?

...and that goes for your flying monkeys, too!

Isn't my "fair share" equal to the cost of my sandwich and drink--whatever I order? Unless the pricing is out of whack...then we have a different issue. Perhaps tuna eaters are subsidizing ham and swiss eaters...and so on.

A soup kitchen in Clayton? If you are an out-of-towner, it is very nice, and some very wealthy people tend to live there. A "soup kitchen" for Paneras would be if they built a "donation only" restaurant in a poor area, but then they wouldn't get many donations would they? This is just a politically correct publicity stunt to make Paneras look so generous.

anon 16:25 you can't be serious. wait, i know, maybe this tactic will work with the plumber tomorrow when he comes. i'll just ask him to make a "donation". i'm sure he won't mind. it's not like he has to pay his bills or anything. maybe the gas and electric companies will give him a "donation". and the university his children are attending, maybe they are feeling generous too. the possibilities are endless. why doesn't panera open a restaurant in an area where there are a lot of poor, elderly and homeless people who are realllllly hungry and cant afford cab fare to clayton? oh yeah, free stuff, lots of it. ok. we already have organizations that feed hungry people that cant afford to pay for their food - it is called
charity.

Yes, I am from out of town (Kansas City), so I am not acquainted with the various neighborhoods in the St. Louis area. However, I am still not certain why a "self pricing" restaurant is bad regardless of its location. I agree that this type of establishment is probably needed more in less affluent areas, though I do not understand why this particular location is still bad or problematic. Is a soup kitchen only a soup kitchen if it is in a poor area? How about other charity-like entities such as Goodwill? Are they really only charitable if they are located in poor areas?

I tend to agree that this is at least partially a publicity stunt, though I do not know enough about the company or endeavor as a whole to really make a judgment. I have a jaded view of capitalist enterprises in general, so I frequently see various efforts by businesses as publicity stunts. That does not mean, however, that they are primarily or solely publicity stunts or that the publicity stunts do not have (unintended?) desirable effects.

Now, if this restaurant forced clients to pay a certain amount as a function of their wealth (e.g. incomes twice as large as the HUD area's median income would pay 2x the regular price and those with half the income would pay half price), then I would see more problems. Then again, living in the great aggressive-capitalistic-democratic-free-choice-libertine-and-The-Leader's-Justice-for-All-(except those with connections) land we do, it would still be the business' and the patron's choice to participate in this type of exchange (for now).

If you really want to boycott commies then dont buy anything from China.

Oh wait...but then we cant have our inexpensive microwaves, can we?

God forbid a company try to do something different, like feed the hungary. A couple thousand years ago somebody tried that...

The restaurant is not going to be feeding the "hungry" as anyone who might be hungry would not be anywhere near Clayton. This is a stunt and a very clever one at that. They'll get plenty of donations as none of the business men would want anybody to think they were cheap.

Serious outrage? Serious linkage to communism? You're smarter than that.

This is just like all those "free" car washes that church and school groups run as fundraisers. They're going to wash your car and you donate whatever you choose to the cause.

It is actually a lot like a long-term example of an episode of the Celebrity Apprentice this season, where one night's profits from two restaurants were given to charity.