Fatima: 33 Reasons to Conclude that the Entire Third Secret Has Not Been Released 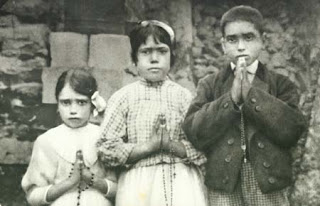 The Holy Father arrived in Portugal today, on his way to Fatima, site of perhaps the most famous of the apparitions of Our Blessed Mother. The following is excerpted from his remarks upon arrival, as translated at Rorate Caeli:

I come as a pilgrim to Our Lady of Fatima, having received from on high the mission to strengthen my brothers as they advance along their pilgrim journey to heaven.

As for the event that took place 93 years ago, when heaven itself was opened over Portugal – like a window of hope that God opens when man closes the door to him – in order to refashion, within the human family, the bonds of fraternal solidarity based on the mutual recognition of the one Father, this was a loving design from God; it does not depend on the Pope, nor on any other ecclesial authority: "It was not the Church that imposed Fatima", as Cardinal Manuel Cerejeira of blessed memory used to say, "but it was Fatima that imposed itself on the Church."
__________________________
Fatima, indeed, imposed itself on the Church. It remains relevant for our times, and in all likelihood encompasses events that are even now yet to pass.
For those of you who are not aware of the controversy over the release (partial or otherwise) of the so-called 'Third Secret" of Fatima in 2000, and especially for those who may think that the entire secret has been made public, I direct you to this talk given by Christopher Ferrara last week at the Fatima Challenge conference. It runs under an hour, and I think your time will be rewarded.
Our Lady of Fatima, pray for us!
Posted by thetimman at 11:10 AM

I think it is an interesting question (and now the subject of a Fr. Z online poll), but while all admit the secret was not released when it was supposed to be, to say the Vatican is holding back would say that the pope is lying. Did not he himself say it was all releaased?

... And I just finished a Ralph McInerny novel about this very subject!

And to think, folks were worried about kids taking Harry Potter too seriously.