From the Pope's Homily Today: A Desire that the Coming Years "Hasten the Fulfilmment of the Prophecy of the Triumph of the Immaculate Heart of Mary" 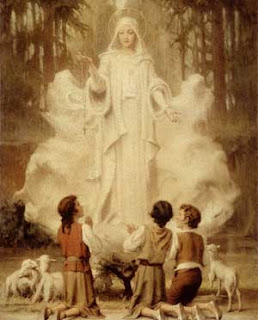 The Holy Father doesn't sound like someone who believes that the triumph of Mary's Immaculate Heart, as foretold at Fatima, has already occurred. From his homily at today's Mass:

"We would be mistaken to think that Fatima’s prophetic mission is complete. ..." (Contrast the 2000 press conference where Fatima was insinuated to refer to past events.)
And this:

"May the seven years which separate us from the centenary of the apparitions hasten the fulfilment of the prophecy of the triumph of the Immaculate Heart of Mary, to the glory of the Most Holy Trinity." (Perhaps the fall of the Soviet Union is not the "conversion" of Russia or promised "period of peace"; perhaps the consecration of Russia is still to be done.)
Posted by thetimman at 1:39 PM

Sr. Lucia (God-Willing St. Lucia) had said before her death that Russia was consecrated [and I am of the mindset that she had a pretty good take on it]. But I think that the conversion good have taken place and that the triumph has not yet completely occurred.

Brother Timman, it's one thing to complete the consecration; it's another for the promise to be fulfilled. God's time is not necessarily our time.

Peter and Jim, I encourage you both, if you have the time, to visit the Fatima Challenge website and browse through the talks given there. Both of your points are covered in various talks, if you are interested in an in-depth response.

Tim:
Thank you for the link suggestion, I will begin to listen to them. My only concerns are this though:

Fr. Gruner (who is a renowned advocate of Fatima) is one of the speakers at this conference. He, however, from my understanding not a priest in good standing. A seemingly disobedient priest. Please see this article.
http://www.theotokos.org.uk/pages/fatima/ngruner/wanderer.html

Also, as I mentioned, Sr. Lucia in letters said that the consecration was made. Yes also mainted conversation with our Blessed Mother until her death. Wouldn't she be the "authority" on the subject?
http://www.ewtn.com/expert/answers/Fatima1984.htm

The consecration has not taken place. Mary said if it was done that Russia would convert. There is no conversion of Russia, not close.

Several recent books have exposed the entire matter as being one of deceit. When exactly did any Holy Father specifically consecrate Russia as requested? That is with alll the Bishops present? Never happened. The specific formula was done it seems, in private, by Pius XII in the 1950's. That is, Pius XII consecrated Russia to Mary's Immaculate Heart. But he did not do it in public and with the Bishops present.

Thus it has not been done and no one can point to it having been done.

JP II consecrated the world to Mary's Immaculate Heart, this was not what God sent Mary to request.

Only the open, public, with all the Bishops, consecration of Russia will suffice.

I didn't speak it, Mary did, as God's messenger.

Which is why the farce of Medjugorje goes on. As just one example. No conversion has been done.

Father Gruner is a priest in good standing. Please repent from any calumny against this good and holy priest!

Go to: Fatima.org and read and learn.

A cordial letter from JP II's secretary to father Gruner.

Don:
I do not believe repentence is necessary unless I have offended you, which I apologize. I am merely going off all the information I have found about Fr.Gruner (outside of the website that he runs). Please check out those sources.
Also I understand that the verbage is what people point to with John Paul II's consecration, but again, Sr. Lucia has said that it was done according to Mary's request in multiple letters- that is what I don't understand.

Peter, I took no personal offense. But calumny against a good priest includes spreading false stories. Forewarned is forearmed.

The Fourth Secret by Socci has opened many eyes.

Regardless of what you make of whether or not Russia has been consecrated, there is nothing false in saying that Fr. Gruner's priestly faculties have been suspended, that he appealed to Apostolic Signatura (Church's highest court), and that the Signatura refused his appeal, confirming the suspension.

If I were interested in determining the truth about Russia's consecration, I would not take cues from a suspended priest.