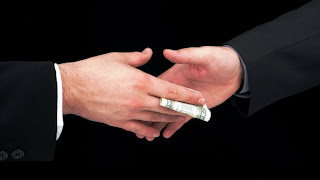 I admit to giving a rueful chuckle when I read this story on STLToday. Not only do my taxes go to pay for schools that my children do not attend, and not only must I cover all the costs of the education they do receive, now other parents must be bribed to send their own children to the prison schools already paid for by tax dollars. Rich, indeed.

From the full story:

Stacey Wright had more than a dozen choices when it came to enrolling three of her children in an elementary school, from charters to magnets to traditional public schools in every corner of the city.

She chose Jefferson Elementary School, the brick St. Louis public school across the street. And for that, she may get $900.

For the first time, a local organization is offering parents a cash incentive to enroll their children at Jefferson. The money is limited to students who didn't attend the school last year. To get it, the kids must finish this semester with near-perfect attendance and receive no out-of-school suspensions; the parent must attend three PTO meetings. The program is being offered to families in three mixed-income housing complexes surrounding the school, where most of the students live.

[...]
Paying families for their children's behavior and attendance is part of an ongoing debate in a half dozen cities. Kids themselves also have been paid for everything from grades on tests to the number of books they read. A Harvard University study in July showed that such incentives improve classroom behavior — but they don't necessarily raise test scores. The study looked at incentive programs offered to 38,000 students at 261 low-performing urban schools in four cities.

Proponents say the cash rewards are no different from offering college scholarships to top achievers at a high school, and that low-income families need the extra help. Critics counter that the cash prizes fail to address problems that lead to truancy and poor test scores, such as bad teaching or a dull curriculum.

"It's almost like bribing (the students) instead of correcting the core problems," said Garrett Duncan, an associate professor of education at Washington University.

[...]
Rewards in schools are nothing new. Suburban districts for years have offered pizza coupons, tickets to amusement parks and baseball games for those who make the honor roll or read a certain number of books over the summer.

In St. Louis Public Schools, the district has rewarded kids who attend the first day of school by entering them in drawings for tickets to sporting events. Until recently, Maritz Inc., the motivational and corporate travel company in Fenton, gave students at school the first week chances to win a big screen television, stereo equipment, T-shirts and rulers.

The $300 incentive at Jefferson shouldn't be troubling, said William Tate, professor of education at Washington University.

"What they're really saying to these kids is your presence on a regular basis is important," he said. "It's so important we're going to reward you for doing it."

Wright said she's going to do all she can to ensure that she and her three children at Jefferson do their part in earning the $900. Getting to the PTO meetings should be no problem, she said. The money would go a long way to help her family at Christmas, when finances are especially tight.

FWIW, I believe that these dollars are coming from a non-profit entity. Reading comprehension is important. Granted, the government props up / subsidizes a myriad of non-profit entities in many and nefarious ways, but without some research (show your work, just like in algebra, and I will post a mea culpa), I think you may be a bit premature in worrying about your tax dollars being at risk here.

"What they're really saying to these kids is your presence on a regular basis is important,..."

It seems the parent(s) should be saying this, not the prison commandants.

Indeed. A friend of mine pointed out the funding source at lunch, and I have edited the piece. Thanks for the correction.

But why is this only available to new enrollees? Don't the kids who suffered there last year deserve this incentive? Is this really about motivating parents to get there kids educated, or is it about luring rent payers to the surrounding housing developments?

(1) "suffered there last year"? That's a mighty tall assumption, and not a particularly friendly one.

(3) FWIW, the SLPS' scores on the MAP test last year were up sharply across the board, and particularly in math. Scoff if you will at the MAP test, but many of the students in the SLPS are not fortunate enough to have either a two parent family capable of having one parent stay home to home school or incomes sufficient to be allowed to attend Catholic schools.

(4) Also, FWIW, SLPS has some schools that are among the highest performing in the state, and Metro High School in particular, is the only Missouri High School listed in the Top 100 public high schools in the nation by Newsweek magazine.

(1) It's so pleasant that we have to entice parents with cash to move in and send there kids their?

(2) Why aren't the happy kids who were successfully edumacated their last year getting this offer?

(3) Many students were fortunate to have parents move to neighborhoods where there education opportunity is optimal.

Rather than respond point-by-point to your criticisms of something about which you apparently have very little knowledge, I ask this question: Why all the angst toward the SLPS?

The degree of difficulty of educating children is extraordinarily high in an urban, inner city school-district rife with: (1) single-parent (or no parent) families, (2) a low economic standard of living, (3) a large portion of children coming from households that do not speak English (or at the very least speak it as a second language, and not particularly well), and (4) a decades-old infrastructure and a crumbling tax base.

While perhaps worthy of pity, and certainly in need of help and understanding, the SLPS is hardly worthy of derision.

A caller on KMOX the other day said this was about propping up a failing school, suggesting that the kids aren't going to get a great education there. Obviously the neighborhood developer wants to prop up their property by propping up the school.

I've shown no angst towards the SLPS. My questions concern one, specific promotion at one, particular school in the district. I'm not sure how that became an indictment of the entire district, public schools in general, or the whole of institutionalized education.

I wish them all the best.

I had 2 in a SLPS last year and pulled them out this year because I feared for their safety. This school was only K and 1st grade! The student body was comprised of those you mention in addition to those from 2 parent homes and middle-class.

It was the 5th point you neglected to mention that was the problem: a liberal, racist administration who would not enforce any discipline whether to prevent problems or address them. I was told, "these children are from the inner city" so there was no expectation of success! Un.be.lieve.a.ble.