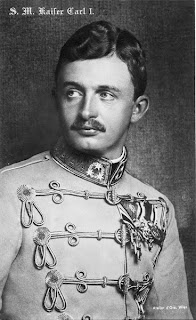 As there has been some discussion lately in recent posts about the relative merits of a monarchy versus a republic (not that we have one of those anymore, btw), I thought I would post a piece on this very subject by Otto von Habsburg, the son of Blessed Karl I, the last reigning Emperor of Austria-Hungary (pictured here). Archduke Otto was nine years old when his father died in exile in Madeira, and is still living, though he has relinquished the headship of his household to his son, Karl. It should be noted that Blessed Karl did not abdicate the thrones of either Austria or Hungary, and though these countries by legislation have abolished the nobility, there is no question as to the proper succession in this Empire, unlike some other countries with exiled royal lines.

Anyway, for those interested, here is a link to Archduke Otto's comparison of monarchies and republics.

Oh, and just for fun, here is the full royal title of the last reigning Habsburg, Karl I:

His Imperial and Royal Apostolic Majesty,

By the Grace of God, Emperor of Austria, Apostolic King of Hungary, of this name the Fourth, King of Bohemia, Dalmatia, Croatia, Slavonia, and Galicia, Lodomeria, and Illyria; King of Jerusalem, Archduke of Austria; Grand Duke of Tuscany and Cracow, Duke of Lorraine and of Salzburg, of Styria, of Carinthia, of Carniola and of the Bukovina; Grand Prince of Transylvania; Margrave of Moravia; Duke of Upper and Lower Silesia, of Modena, Parma, Piacenza and Guastalla, of Auschwitz and Zator, of Teschen, Friuli, Ragusa and Zara; Princely Count of Habsburg and Tyrol, of Kyburg, Gorizia and Gradisca; Prince of Trent and Brixen; Margrave of Upper and Lower Lusatia and in Istria; Count of Hohenems, Feldkirch, Bregenz, Sonnenberg; Lord of Trieste, of Cattaro, and in the Windic March; Grand Voivode (Grand Duke) of the Voivodship (Duchy) of Serbia.
Posted by thetimman at 3:11 PM

THank you. This is interesting and requires some thought on my part.

An instant reaction was that also before 1914, the republics were rather free and economically prosperous and all that monarchies enjoyed. As I read some of his criticisms of republics, I thought that I could see where our US founders sought to address things like an independent judiciary with lifetime appointments. Generally most presidents are quite cognizant that they are president of all the people. They do take their duties solemnly--even Clinton. [I'd except Obama, however.] Also, the founders were clear about the rights of the people coming from God--so they bypassed the king. [The kings abusing their authority from God got to them, one might say.] While the state itself might be secular, the foundation of the country and its society were not godless. Further, I recall the founders disagreeing about whether to have parties, for presumably the concerns that Otto Vh raises. In sum, I think our founders might very well agree with OVH's concerns and probably sought to limit the evils that he mentions, but in these 20-21Cs, where technology has encourage political and economic centrality--whether by business or government--the protections of the US founders gave way with those collectivists who gained power. All for now...Cheers.

The Habsburgs don't look quite so bad in light of the regimes and calamities that took their place after 1918. I was surprised, in fact, to see this sentiment in spots during my travels in Eastern Europe - and no, none of the interlocutors in question was, to my knowledge, a traditionalist Catholic.

The edifice of Austria-Hungary was cracking, visibly, by 1914; but even so one wonders where things might stand had Franz Josef taken the sage advice of St. Pius X and not insisted on war with Serbia - an unusual rashness for him. Instead, we ended up with...Woodrow Wilson's world, with its self-righteous insistence on secular ethnic-based nation-state republics of stillborn legitimacy, racked with seething minorities and prey to an entire spectrum of "isms". From which Europe has yet to recover.

I liked Archduke Otto's line about the "inflexible legitimism of Versailles" deepening the great inherent pitfall of monarchism in the age of the ancien regime. On the whole he (like most of his forebears) shows a more balanced appreciation for the nature and limits of monarchy - and, for that matter, the Church - than did the Bourbons.

This all brings to mind a wonderful defense of the virtues of monarchy by Patric O'Brian - in the mouth of Stephen Maturin, the naturalist-surgeon with whom he most identified - in his Aubrey-Maturin novel THE FORTUNE OF WAR. Conversing with an American officer, Maturin admits that he was once a fervent republican in his youth, but that with age "I have come to think that after all a monarchy is best."

The nonplussed American replies that "surely mere birth without any necessary merit is illogical?"

Maturin only warmed to his theme, however: "Certainly, and that is its great merit. Man is a deeply illogical being, and must be ruled illogically. Whatever that frigid prig Bentham may say, there are innumerable motives that have nothing to do with utility. In good utilitarian logic a man does not sell all his goods to go crusading, nor does he build cathedrals; still less does he write verse. There are countless pieties without a name that find their focus in a crown. It is as well, I grant you, that the family should have worn it beyond the memory of man; for your recent creations do not answer - they are nothing in comparison of your priest-king, whose merit is irrelevant, whose place cannot be disputed, nor made the subject of a recurring vote."

Not so densely reasoned as Archduke Otto's defense; but eloquent just the same.