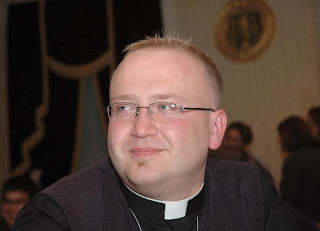 By a vote of 257 to 185, the former Catholic parish of St. Stanislaus Kostka voted, in effect, to reject the recent offer of reconciliation most generously made by Archbishop Carlson. The actual proposition voted on indicated the majority did "not agree with the direction the Board is pursuing toward settling a lawsuit."
There are so many things that could be said in an offhand manner, but the situation is so sad. It has taken nearly a thousand years and the Eastern schism is not yet healed, so perhaps it is not surprising that this one persists. And one has to wonder how many Catholics are still attending that church, even confused ones. A non-Catholic non-priest has a way of attracting fellow non-Catholics. Even the attorney for the excommunicated Board and Mr. Bozek belongs to a group that pretends to be "reformed Catholic".
The real problem with the St. Stan's group is that they don't realize that the window of opportunity will close in the near future. Not just the window of opportunity to reconcile with some shred of dignity, but even the opportunity to bask in the garish light of popular rebellion. They risk being old news; they are already old news.
The joke that is being played on them is one of the miracles of the faith. The only Person who still cares about them is Christ. The only group that cares is Christ's Church, the same Catholic Church they have cast off. In God's never-ending mercy, the Church still wants them. And praise God for that.
Because when Bozek has taken everything he wants, and when the Board has picked through the bones of its petty grievances, and when no one else cares, Christ and His Church will be there to pick up the pieces.
So, the saga continues, but the logic of its conclusion is inexorable.
Posted by thetimman at 6:19 PM

What a shame but that's what can happen when you choose dissident carpetbaggers over the Church.

Very unfortunate - What is really disturbing is supposedly there is a parish board...yet they are over turned by the parish ? Sounds very protestant if you ask me.

I wonder when the Carlson bashing starts in all this? So far he has been made the poster child of being the Antithesis of his Excellency raymond burke

I won't join the bashers on this one. Not only is he my Archbishop, this situation admits of more than one approach. While I think His Grace is generous to a fault with these people, his approach shows mercy and focuses on the most pressing problem-- Bozek, invalid sacraments and schism. The thugs on the board are secondary to souls being lost.

The only regret I have with the current approach is that it is used to bash Abp. Burke. But I don't think that should cause the opposite error of faulting His Grace Archbishop Carlson.

I think pfinley meant that the St. Stan hard-liners and their allies would start bashing Archbishop Carlson.

Patrick, thanks, I get that; the reason for my own comment was to sort of head off any blowback that follows such a development. What I mean is, if the heretics bash Abp. Carlson for his stance, which is much more "lenient" (as the world sees it) than Abp. Burke's, then there might be a temptation for faithful Catholics to start setting the policies of the one against the other.


Anybody who reads this blog knows I was a supporter of the past policy, but I can't fault the current one in light of the circumstances now present. It is different, but well within the Abp.'s sound discretion.

So, I jumped ahead a bit.

That being said, there can be no clearer vindication about just which party is credible in the ongoing dispute. Remember how the heretics trumpeted to the media that it "was all about the money" to the Archdiocese? Well, on the KSDK site's version of the story, there is a quote from the Stan's mob about how being offered the control over the property and assets "wasn't enough"; they want more. And no matter what is offered they always will want more.

Finally, the KSDK story cites how many Polish parishioners who are fed up with how the church is being run were not allowed to vote. So, it is a lean majority of confirmed schismatics.

What a welcoming, peaceful and inclusive place that must be!

This is terribly sad. I am guessing that the former parish consists mostly non-Catholics & dissident Catholics who aren't interested in the Catholic Polish heritage, but in a 'church' that preaches a god in their own image--gay, female clergy, democratization, and the rest of the laundry list. These are not, for the most part, people who want to be reconciled. [I'd love to see the data on current members since schism. Who were members when the parish was Catholic? Who joined later? With no Catholic affiliation?]

The Catholic and Polish heritage of this one-time parish is now lost to the exploiters of division. Uncle Screwtape would be so very proud.

Timman's last note about them wanting more reminds me of some of our public policy discussions at my last firm. There are always those who shout "We want more." But more is never enough.

St Stanislaus pray for these souls.

I see that Bozek has a soul patch, but what about his soul and the souls of those who follow him?

I don't know why the P-D calls this a "slim majority". The non-reconcilers won by 82 votes which is almost of third of the vote tally.

The problem, I'll wager is that the rank and file of the parish has changed enough so that most of the parish is more comfortable with the little boat of Bozek than with the barque of Christ.

The place may have by now become home parish to enough apostates that there cannot be any method of resolution other than a successful lawsuit.

"...the parish has changed enough so that most of the parish is more comfortable with the little boat of Bozek than with the barque of Christ." - MrGuyFawkes 08/09/13:15

You wrote, "I think it is less a matter of the parishoners not wishing to board the 'barque of Christ' as it is rejecting the 'bark of the Archdiocese'.

You've well outdone me in word play and I tip my hat.

Nonetheless, one can hardly call Archbishop Carlson's gentle entreaty a "bark". It was more soothing than lambs wool and His Excellancy's tone had all the melifluous and "pastoral" oohs and ahhs that Marek said St. Stan's required in a bishop. How did Mr. M. Boguslaw put it? He said, "we need a bishop who is less a lawyer and more of a pastor."

They asked for a gentle hand and they got a hand of lanolin. And yet they rejected it. There is and was no threat in the bishop's offer.

They are rejecting it for other reasons I suspect. But since we are having fun with word play I'll leave you with this pathetic pun which is none the less true.

There's no "bark" from the Archbishop yet but there will be the "bite" of DOG-ma if those Old "Yeller" Catholics don't come to the table.

My prediction: His Excellancy will have to get as tough as Archbishop Burke before this story ends.

The deceased Dan Rostenkowski's viewing and funeral will be held at St. Stanislaus Kostka Church in Chicago next week. Still in communion with Rome up there!

You published my second witty comment, but not my first.

Come now, it wasn't all THAT anti-papist, was it?

A further note. I read that Rosty also ensured the redirection of the Kennedy Expressway in Chicago in order to save St. Stan Kostka parish, his current and ancestors' parish.

You know, while he was a crook of a pol, "liberals" of his generation knew there were certain things you don't mess with. They respected their Church.

I daresay some of these disobedient children in STL could learn something from Rostenkowski.

Your word play is charming but I had hoped you would have addressed my substantive question. Where in Archbishop Carlson's offer is he "barking" or bullying anyone?

You tell me and I'll let you have the final word.

The presumption that the Catholic Church and her shepherds can be slandered without evidence is saddening.

C'mon now. Let's put up or shut up. Where in his offer does His Excellancy intimidate anyone? He's giving in to all the St. Stan's original demands. Where is the "barking"?

cdg, your comment was disrespectful, as you are likely aware. As to whether it was funny--alas! only you and I will know.

About 10% of my comments never see the light of blogspace because Thetimman throws them away. No big deal. It's called editing. I just think of it as Thetimman being "less a lawyer than a pastor."

It's part of the job of running a blog or an Archdiocese.

Sooner or later you have to exercise the crook.