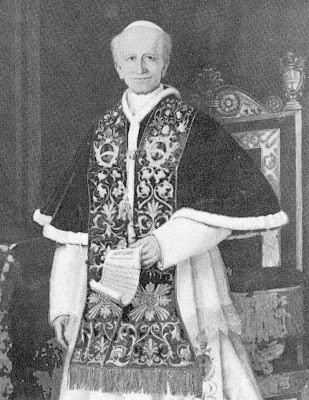 "When the Christian religion is rejected and repudiated, marriage sinks of necessity into the slavery of man's vicious nature and vile passions, and finds but little protection in the help of natural goodness. A very torrent of evil has flowed from this source, not only into private families, but also into States... Then, if they are hindered by law from carrying out this shameful desire, they contend that the laws are iniquitous, inhuman, and at variance with the rights of free citizens; adding that every effort should be made to repeal such enactments, and to introduce a more humane code..."
-Pope Leo XIII, Arcanum 27
Thanks to reader Dennis.
Posted by thetimman at 10:42 AM

I am continually edified as to the truth of the Catholic Church by reading the writings of Christ's vicars.

Why don't people listen to the Pope?

Amen to the above. I was interested also in the next paragraph of Arcanum:

"Now, however much the legislators of these our days may wish to guard themselves against the impiety of men such as we have been speaking of, they are unable to do so, seeing that they profess to hold and defend the very same principles of jurisprudence; and hence they have to go with times..."

The Pope was speaking of divorce, but it applies as well to worse things. Most people don't *want* homosexual marriage, but they don't want Church authority either, and in rejecting it they ruin much more than they expected to ruin. I think a lot of Protestants don't realize (for example) that by insisting on their right to contraception in marriage, they create the culture that kills 1 million babies each year. People don't make the connections or see where their ideas lead. But one simple connection is this: you KNOW homosexuals wouldn't want same-sex marriage if they didn't also have no-fault divorce.

I prefer to call you Rachel Light.

You have it right on the money. If you want to end same-sex marriage then kill no-fault divorce. If gay divorcees (I don't mean Fred Astaire) have to state and make plain their complaints before a city judge I guarantee that re-estate sales in Lafayette Square, the Central West End and the Castro will plunge.

We might also contemplate making Missouri a community property state. Or am I wrong?

Excuse me, but perhaps you should move to the Vatican where Catholic laws can govern your daily life.

In America, the Catholic Church has no more authority than any other religious organization. That would be a Theocracy and the last we tried that a whole lot of women were burned at the stake.

Have a blessed day...

If the Vatican would take me I would leave without waiting to finish typing this sentence.

But more to the point, the problem in America stems exactly from the fact that the Catholic Church has no more authority than any mere sect. Of course, it is not necessary to have a 'theocracy' as you call it in order to have right relations between the state and the Church; it just requires a government that acknowledges the legitimate sphere of ecclesiastical authority.

The 'theocracy' of which you complain was Puritan domination of secular government in Massachusetts. Not quite the same thing.

Puritan rule over the government vs. Catholic influence being "not quite the same thing" is an understatement. Protestantism has brought us the Salem Witch Trials, prohibition, and persecution of Catholics (it was illegal for Catholics in some colonies to hold public office, to say nothing of the horrors of Elizabethan England). That's not even touching things like public schooling and freemasonry. A Catholic rule that followed the Truths of the Church would be chivalrous and real social justice (as opposed to the politically correct version that's so popular).

Anonymous said: "That would be a Theocracy and the last we tried that a whole lot of women were burned at the stake."

In the first place, as Timman rightly notes, that was a puritan theocracy that executed those women, not a Catholic one; and in the second place (though perhaps I quibble), they were hanged, not burned. Nearly all of the witch hunts of the early modern age were conducted, in fact, by Protestants, not Catholics.

More to the point I don't think any of the traddies here advocates a theocracy - that is, rule by clerics. Instead, some prefer a confessional state, which is ruled by laymen (be it a monarchy, constitutional monarchy, or republic), which accords special status to the Catholic Church, and whose laws are informed in some significant and formal way by its teachings.

Small point of correction to KP: "it was illegal for Catholics in some colonies to hold public office" - for a long time, it was illegal for them to be there at all in the New England colonies. They stood at risk to be deported or executed if discovered.

Here's something I struggle with - look at those "Catholic" states - Spain, France, nearly all of South America, where the Church has a special status. And you see that mass attendance is much lower than here. I credit the Protestants with keeping our faith militant in the US. Where is the fervor of the Church's eldest daughter today? She is overrun with Mohammedens.