Vigil of the Immaculate Conception 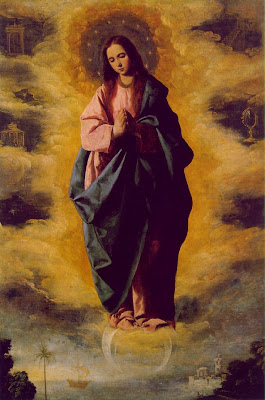 That would be today.

Well, actually, on the Church's calendars--both new and traditional-- today's feast is that of the great St. Ambrose, one of the Fathers of the Western Church. However, before the calendar changed in 1955, the Vigil of the Immaculate Conception was observed liturgically today.

The rubrics and calendar of the Mass and the Divine Office were reformed by the constitution Cum hac nostra aetate (March 23, 1955). The reform to the calendar, the most dramatic before its complete overhaul in 1969, consisted mainly in the abolition of various octaves and vigils. An octave is the week-long prolongation of a great feast, either by the celebration of a proper Mass all through the Octave or by the addition of an additional Collect when the Mass of another feast is celebrated. Of the 18 octaves existing in the Roman calendar, all but three (Easter, Pentecost, Christmas) were purged in the reform, including the octaves of the Epiphany, Corpus Christi, the Ascension and the Immaculate Conception. A vigil is a day of liturgical preparation preceding a great feast. The reform of 1955 eliminated roughly half the vigils in the Roman calendar, including the vigil of the Epiphany and the vigils of the Apostles.
___________________________
So, as you can see, the liturgical de-nuding began even prior to the Council-- 'thanks' to the efforts of Msgr. Bugnini and others-- and it is interesting to note there was more than one problematic "nostra aetate".
In any event, as we pray and work towards restoration I wish readers a spiritually productive vigil and a blessed feast day of our Lady.
Posted by thetimman at 2:24 PM

So we're citing wikipedia now as a proper source of Catholic information.

Was this authorized by Vatican II? Surely not by the Council of Trent?

This blog is going to the dogs, I tell ya.

Though today is the Vigil of the Immaculate Conception, liturgically (according to the pre-1955 rubrics) the day is of St. Ambrose, whose feast is a Double. The Vigil is not commemorated at Lauds, though the feria is; the Vigil may be commemorated at Mass.

It's a blog post, not a term paper. Take it easy!

Also, if the wikipedia article that this post quotes were a term paper, it would be a pretty good one. It's just over three pages long, 1800 words, and has 14 footnotes referencing four sources. That's an average of one textual citation per 128 words. If I were to hold to the same standards of academic integrity in this comment as those used in that article, I'd be getting pretty close to needing a footnote right about now.[1]

But, It's hosted on a site called "Wikipedia" which anyone can edit, so it was probably made up by a 16 year old girl as a prank.

--------------
[1] For an example of academic integrity to contrast with my comment, please see:
en.wikipedia.org/wiki/Liturgical_reforms_of_Pope_Pius_XII#cite_ref-0