You Know It's a Good Birthday... 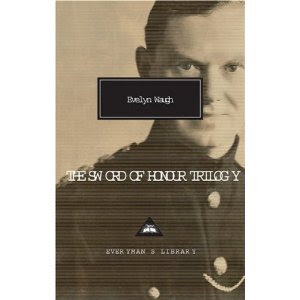 ...when your lovely wife Sharon gives you the Sword of Honour trilogy by Evelyn Waugh.

Thanks, Sheryl!
Posted by thetimman at 10:14 AM

I just bought this book for my Dad's Christmas present. I hope he likes it! I've not read it but saw it recommended on the Pundit Pundette blog site that I check out every day. Merry Christmas!

When of course everything falls apart and Guy gets rejected because the wife is insulted that she can't have a properly adulterous affair with him because he thinks the marital act will be quite marital and moral and what's the cheap thrill in that?

StGuy, I think you have a two-track mind.

You wrote, "StGuy, I think you have a two-track mind."

Yes I do. Backwards and forwards.

Ah yes. I've had many copies of that trilogy. Being close to the Staff College at Ft. Leavenworth, every year we make friends with the military officers who pass through the parish. My wife's standard going-away present for the army or navy wife, once the husband gets orders to move on, is my copy of the trilogy (in the same Everyman's Library edition.

I, too, love the part where he tries to trick his estranged wife into her marital duty, but gosh, I can't think it tops the Apthorpe chapters. Those were the best, especially the Thunderbox.

BTW, Timman, I'm back to blogging...at least for a little while. For the last couple of years I have been busy...to busy to even read blogs, much less keep up my own, but the itch is back, and I'm trying to catch up on what I missed at SLC and others. As for the Cave, it may change a little in content, or it may go dormant as something more interesting happens in my life, but I'm trying to keep it as snarky as ever.