"Hold Nothing Back from God": An Interview with Sister Rosalind Moss 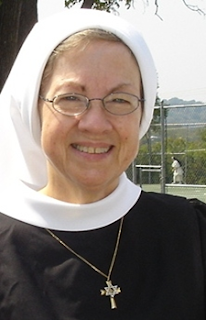 As she prepares to move to Tulsa in the coming days, Sister Rosalind Moss, foundress of the Daughters of Mary, Mother of Our Hope, and well-known Catholic apologist, was kind enough to give me the following interview on March 3, 2011:

Saint Louis Catholic: First of all, how did your novitiate year with the Sisters in Tyringham go?

Delightful and refreshing words on the second day of Lent 2011. Thank you very much for bringing it to us,Timman.May all of Sr. Moss's sufferings bring the greatest blessings to her new order!

Thanks, Timman. God bless Sr. Rosalind for her perseverence. I know that many, many people were looking forward with renewed hope, now that she was back among us, to seeing her community take root and flourish here. Our loss will be Tulsa's gain.

I bought 36 copies of the StL Post that day, just to pass out to friends.

I to will keep your intentions in my prayers. I know God will reveal his will when the time is right.

Thank you for the interview. I was especially moved by the quotation from St Francis de Sales, and hope to practice that attitude. Please keep us informed of Sister Rosalind's journey - I am sure it will be inspiring.

I'll never forget Sr. Ros' kindness to me the few times I met her in St. Louis! I'll be praying for the success of her community in their new home.

What wonderful news for all of us in the Diocese of Tulsa! :) We'll be so excited to welcome the sisters here, and to support them with our prayers as they begin this new venture in Christ!

I thought Sister Rosalind would look funny in a habit, but she looks absolutely perfect. I hope all her prayers are answered in Tulsa.

I don't consider your comment anti-Catholic. It is likely imprudent, and would serve no good purpose to post. I sympathize with your substantive points, though not perhaps some of the tone--but email is a bad medium for catching tone and nuance. Your comment is well-taken, even if no one else sees it, and it probably did you good to get it off your chest. You aren't alone in your opinions, but recall that we have to make all allowances for good will in charity. But, I think if I get your gist that you know this already. Prayer and fasting, especially in this time of Lent, can move the world.

I'm still trying to figure out how it's good news that they'll be perpetuating the vandalized, objectively inferior Mass; that is, the Novus Ordo.

I am in the diocese of OKC and I've heard some of the Benedictine nuns at Red Plains are moving to Atchison, KS. You might check to see if the Red Plains facility might be available for Sister Rosalind. Our new Archbishop Coakley would also welcome her and her new order. He was just installed in February. There are also just a few Carmelite nuns that might make room for her in OKC. We seem to have a lot of old facilities here. Also there is an old Catholic mission church near Bixby (Tulsa) that is for sale that was converted to a secular wedding chapel in 2005(?) that might could be converted back? Sounds like she needs a fundraiser!

An anonymous poster posted the following, edited slightly by me:

So sorry to hear that Sister Rosalind has had to move from St. Louis after all of her work and efforts there. It is true that following God's will at times brings suffering, pain and confusion, but it is because we are being asked to leave the better for the best ~ His Holy Will.

[That leads me to ask about] the Adorers of the Royal Heart of Jesus, Sovereign King leaving (Sister Marie of the Love of God) and her order not coming to the US!.

It would be a disservice to the Church after all of the work done to restore the convent at St. Francis de Sales. May prayers for Sr. Rosalind and the Adorers.

I am not privy to the plans of the Adorers, anonymous, but I don't think they are gone for good. Sister Marie told us she left for reasons of health, and she is currently in Europe.

We all pray for the return of the sisters to de Sales, and I believe it is their intention to do so. Hopefully soon. A matter for prayer.

What a blessing to read this interview. I love Sr. Rosalind. She radiates humility ... talk about a 'saint-in-the-making!' :) Also, if she ever needs to expand her order in the future, there is a convent in Grand Island, NE. that might be available, as there are no sisters there anymore. It's right by St. Mary Cathedral. Bishop Deninger, (the cousin of my husband's brother-in-law)would love to have her community/order there! We have visited the Clear Creek Monastery 3 times and next time, maybe we can visit you when we go through OK, to see our son in Texas. God bless you, Sister Rosalind! You'll be in our prayers.:)