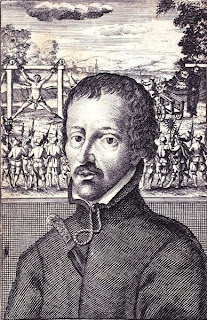 An opinion piece on LewRockwell today about the recent British Court decision denying foster parenting to Christian parents because of their views on the immorality of sodomy can be found here. Britain's woes are just as self-inflicted as our own, though I like to think we are ten years or so behind them on the road to ruin. When I'm in a hopeful mood, I also like to think that there is enough time for us to avoid disaster. The mood passes quickly.

The author (English, and apparently not Catholic) asks "How long before Christians are actively persecuted in England?" I would respond that it started nearly five hundred years ago in earnest, and that the rulers of Britain are quite good at it.

How Long Before Christians Are Actively Persecuted in England?

I think it would be useful to begin this article with a brief statement of the facts. Eunice and Owen Johns are an elderly couple from Derby, who fostered a number of children in the 1990s, and who recently offered their services again to Derby City Council. Their offer was rejected on the grounds that, as fundamentalist Christians, they might teach any children in their keeping that homosexual acts were sinful. They took legal action against the Council, arguing that their beliefs should not be held against them. On the 28th February 2011, judgment was given against them in the High Court. The Judges ruled that, where the laws against discrimination are concerned, sexual minorities take precedence over religious believers. Because Mr and Mrs Johns might not remain silent about sexual ethics, there was a danger to the "welfare" of children taken from their homes by the Council.

The Judges insisted that this did not represent a "blanket ban" on the fostering of children by religious believers. There was no issue involved of religious liberty – no precedent being set for wider discrimination by the authorities. It was simply a matter of child welfare. You can read all this for yourself on the BBC website.

I think we can take it as read that the Judges were talking hot air about the nature of the precedent they were setting. There is already a modest but settled ruling class bias in this country against Christianity. This does not extend, so far as I can tell, to Jews and Moslems. But the bias does certainly apply to fundamentalist Christians, especially when it is a matter of what they believe and might say about homosexuality. Yesterday, they were barred from fostering, and perhaps also from adoption. It is only a matter of time before they are barred from teaching. It is conceivable that they will eventually be classed – on account of their beliefs – as unfit parents and will have their children taken away from them. Before that happens, of course, there will be laws against home education, and an inquisition in the schools of what they have been telling their children.

[...]
But, this being said, I return to the matter of our ruling class bias against Christians. Why? Why should Christians be so disliked? Why should Christian hoteliers be persecuted for refusing to take in homosexual guests, or refusing to let them occupy double beds? Why should Christians not be protected – given our apparently comprehensive anti-discrimination laws – when forbidden to wear crosses at work? Why should banknotes be printed with pictures on them of Charles Darwin? The facts that Darwin was a great man, and that I think he was right about evolution, are beside the point. For very large number of British citizens, he was a gross blasphemer. Why are the few British colonies that remain being ordered to remove any reference to Christianity from their constitutions? Why do many local authorities keep trying to rename Christmas as Winterval? Why is there so much evidence, both anecdotal and on the record, of an official bias against Christianity?

One answer, I suppose, is the current power of the homosexual lobby. The prejudice against homosexuality that has existed throughout much of European history is blamed – perhaps unjustly – on the Christian Faith. Certainly, Christian leaders were, until very recently, forthright in their condemnation of homosexual acts, and they opposed the legalisation of such acts. There are many homosexual activists on the lookout for historical revenge, and who are making use of every law that now stands in their favour.

But I am not satisfied by this explanation. [...]
We are moving towards a persecution of Christianity because Christians believe in a source of authority separate from and higher than the State. Until recently, it was the custom of absolute states to make an accommodation with whatever church was largest. In return for being established, the priests would then preach obedience as a religious duty. Modern absolute states, though, are secular. Such were the Jacobin and the Bolshevik tyrannies. Such is our own, as yet, mild tyranny. In all three cases, religion was or is a problem. Though a Catholic, Aquinas speaks for most Christians when he explains the limits of obedience:

"Laws are often unjust.... They may be contrary to the good of mankind... either with regard to their end – as when a ruler imposes laws which are burdensome and are not designed for the common good, but proceed from his own rapacity or vanity; or with regard to their maker – if, for example, a ruler should go beyond his proper powers; or with regard to their form – if, though intended for the common good, their burdens should be inequitably distributed. Such laws come closer to violence than to true law.... They do not, therefore, oblige in conscience, except perhaps for the avoidance of scandal or disorder." (Summa Theologiae, I-II, 96, 4, my translation)

Certain kinds of bad law do not bind in conscience. And there may be times when even the avoidance of scandal or disorder do not justify obedience. Then, it will be the duty of the Faithful to stand up and say "No!" It will be their duty to disobey regardless of what threats are made against them. Any ruling class that has absolutist ambitions, and is not willing or able to make an accommodation with the religious authorities, will eventually face a wall of resistance. It will eventually go too far, and command things that cannot be given. The French Revolutionaries were taken by surprise. The Bolsheviks knew exactly what they were doing when they hanged all those priests and dynamited those churches. Our own ruling class also knows what it is doing. The politically correct lovefeast it has been preparing for us throughout my life requires the absolute obedience of the governed – absolute obedience to commands that no fundamentalist Christian can regard as lawful. Therefore, the gathering attack on Christianity.

As said, this does not yet apply to the other religions. The Jews are untouchable. Besides, religious Jews are a minority within a minority, and involve themselves in our national life only so far as is needed to separate themselves from it. The Moslems and others are not really considered part of the nation. Otherwise, they are considered objective allies of the new order under construction. Otherwise, no one wants to provoke them to rioting and blowing themselves up in coffee bars. But it goes without saying that they must eventually be persecuted should the Christians ever be humbled.

But now – and only now – that I have said this, I will talk about precedents. Sooner or later, the present order of things will come to an end. It is based on too many false assumptions about human nature. It is based, indeed, on too many misapprehensions about the natural world. In the short term – even without pointing guns at them – people can be bullied into nodding and smiling at the most ludicrous propositions. In the longer term, bullying always fails. The Bolsheviks had seventy years, and murdered on a scale still hard to conceive. They never produced their New Soviet Man. Except for the worse, they never touched the basic nature of the Russian people. Our own ruling class will fail. What new order will then be established I cannot say. But I suspect it will be broadly Christian.

[...]
For the moment, however, England is a country where Christians are fair game for harassment. I do not suppose that the case of Mr and Mrs Johns will be my last reason for commenting on this fact.
Posted by thetimman at 3:10 PM

I'm pretty sure Islam also condems homosexuality. So, are Muslims also to be denied as foster or adoptive parents in England?

Or is this ignored because "no one wants to provoke them to rioting and blowing themselves up in coffee bars."

Muslims will not be prosecuted for their beliefs, because they are very much against Christianity. This is all about getting rid of the Christians, which is one of the top elements on the Jihadist's list.

THe stupid liberals do not realize, however, that when the Muslims take over, the Muslims will turn on anyone and everyone, even the pagan communist liberals.

C.S. Lewis' "That Hideous Strength" forecast all the above.