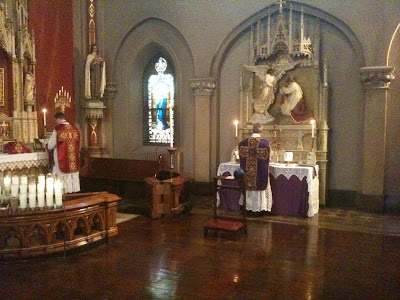 Pretty cool experience today at 8am Mass. The American Province's priestly retreat is underway, and there are lots of priests who need to say their daily Mass. There were five private Masses while the public one was ongoing. I snapped this picture after Mass was over to capture the scene in one transept of the Church. It makes concrete the reality of the multiplicity of daily Masses all over the world giving praise to God and yet offering the unity of the one and only Sacrifice. St. Pio once remarked that the world could more easily survive without the sun than without the Mass. True enough.

If you get a chance, say a prayer for these men that their retreat will be spiritually beneficial.
Posted by thetimman at 9:53 AM

Wow. Absolutely beautiful, Timman. Thanks you for sharing with your readers a simple photo of that which most of us will never witness in our lifetime.

Prayers for these priests!

But deplorably they seem to celebrate without a server or any one else assisting; something which would have been unthinkable before the Council except in cases of grave necessity.

I have had the privilege of serving a private Mass in the Trinity chapel (see photos at link above) while Masses were being said at all the altars. The experience is overwhelming!

Gregor, I don't pretend to know the rubrics or history on this, but just as an FYI some of them did indeed have a server.

As an old Cathedral altar boy, I used to serve multiple private Masses in the four chapels plus there is an altar in the sacristy. One summer day there was some sort of mass priest convention and myself and a buddy were the only servers that spoke Latin and available. We took turns assisting in various chapels. My record was 11 private Mass services one day. Mass was going on all morning in the Cathedral.

We both assisted at the 12:05 Mass which was the last offered. We suffered from mass fatigue. Fr. Boland took us down the road for lunch. Priests were waiting for chapels and for Kevin and myself to offer Mass.

Private Mass was the norm in those days. My father used to say on Sunday, just go anytime to the Cathedral and "catch a side Altar."

Never mind whether or not anyone else was present. If the Church allowed it; it was fine. Just think, instead, like a Catholic, and try to imagine all the sanctifying grace God poured out on our sorry world each time the Holy Sacrifice of the Mass was offered.

Gregor, dear brother, this might be a good time to let your subscription to the NCR run out.

Another word on the server question-- I did a little checking, and it seems this is not a post-V2 thing. There were already indults made for this practice around the turn of the 19th-20th century, including the notable one involving Blessed Charles de Foucauld.

However that may be, by the 1950s the practice of private Masses without a server seems to have been normal enough. Canon law allows for it for a reasonable cause.

In the case of this particular set of Masses, I can only say that there were likely not servers available for all of them. In modern times it is hard enough to find servers who manage the Latin, and these Masses were late enough in the morning to exclude the possibility of most working men and school-age boys.

"How can their be a Mass without the participation by the faithful?

With all due respect, this question evidences a complete lack of Catholic teaching on the Mass. Please try to do some reading on what the holy sacrifice of the Mass actually is and you will understand.

The fact that this question can even be asked is yet another sign of the Springtime we have been enduring lo these many years.

The entire Church, militant, suffering and triumphant, is present at every Mass. The sacrifice is Christ's, the priest is His minister. It is an unfortunate misconception in the wake of modern catechesis that we are somehow "necessary" to the equation.

That may sound jarring, but I mean it as a positive that we are "unnecessary". God loves us for no reason of our own. It is all free gift. That makes our position more secure than if it were not so. What happens when our "usefulness" goes away? God still loves us. Christ still is sacrificed on Calvary. We are still redeemed, and the frutis of redemption are applied at every Mass, whether we are there or no.

I saw a private Mass at the Birmingham Oratory, and felt so blessed! The priest was at one of the side altars, for the Sacred Heart of Jesus. It was beautiful to see him so focused in spite of the somewhat noisy pilgrimage group. A lovely memory.

Thank you for this picture. I have been a Catholic for almost 21 years and I have never seen this. It's magnificent to think of the infinite worth of one Mass, multiplied many times in just one location!