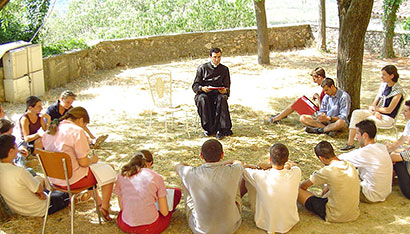 Exciting news from the Institute of Christ the King Sovereign Priest.  This July, the Institute will host its Sursum Corda Summer Camp for young adults ages 18 and older.  Canon Aaron B. Huberfeld will be the camp chaplain: 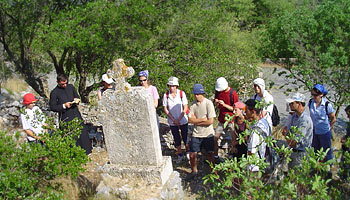 The Institute of Christ the King has organized a Sursum Corda young adult summer camp for ages 18 and older.  It will be held in Milwaukee at the Retreat Center located on the grounds of St. Francis de Sales Seminary (3257 South Lake Drive, St. Francis, WI 53235).  The camp will begin in the afternoon on Friday, July 8 and conclude at about noon on Monday, July 11.

There will be daily Mass and Compline, Faith formation classes and discussions, and other social activities for the young men and women.

The camp will cost $200 per person, with $100 of that being required for a deposit. The number of participants is limited to only 35, so register soon!

Register for the Camp

Please enter the name of the participant [at the Camp page of the Institute website here] and click "Register Now." On the next screen, you must then submit a $100 deposit online securely through PayPal using any credit or debit card. Please repeat this process if registering multiple people.

Would St. Francis de Sales approve of the Square Dance?

Well, let's see-- in the Introduction to the Devout Life, in a chapter on "balls and other lawful but dangerous amusements", St. Francis says:

"Dances and balls are things in themselves indifferent..."

He then goes on to say that the circumstances surrounding them can be dangerous. I will get to that in a moment. But first things first. He says they are lawful and in themselves indifferent, i.e., not inherently bad.

So, they are lawful, and not inherently bad.

St. Francis then says, "but the circumstances ordinarily surrounding them have so generally an evil tendency, that they become full of temptation and danger."

Note he mentions circumstances "ordinarily" surrounding them, as having evil tendency. So, with reference to "balls" (which involve a lot more interpersonal contact than a lowly square dance-- formal close dancing, dinner, private conversations, a party occupying many rooms, etc.), he laments the lateness of the evening, losing sleep and rising late, fostering vanities and forming dangerous attachments.

In this case, we have a square dance activity as a recreational segment within an entire spiritual retreat focused on formation issues particular to young adults. Since "balls" are lawful and morally indifferent of themselves, proper instruction relative to dances and social events these young people will encounter might be appropriate.

The retreat is led by a wonderful traditional Catholic priest of an excellent Society of Apostolic Life of Pontifical Right with a Salesian formation and spirituality. All the persons attending the square dance are over the age of eighteen, and are also chaperoned by Catholics of good repute. It takes place from 7:30 pm to 10pm (not too late) and is followed by Compline, which ought to provide a fitting way to collect oneself at the end of the day.

So, my answer to your question boils down to this: Yes, I think he would.

The Catholic Encyclopedia has some comments of social dancing that at least raise some questions:
"As to social dancing, now so much in vogue, whilst in itself it is an indifferent act, moralists are inclined to place it under the ban, on account of the various dancers associated with it. Undoubtedly old national dances in which the performers stand apart, hardly, if at all, holding the partner's hand, fall under ethical censure scarcely more than any other kind of social intercourse. But, aside from the concomitants — place, late hours, décolleté, escorting, etc. — common to all such entertainments, round dances, although they may possibly be carried on with decorum and modesty, are regarded by moralists as fraught, by their very nature, with the greatest danger to morals. To them perhaps, but unquestionably still more obviously to masked balls, should be applied the warning of the Second Council of Baltimore, against "those fashionable dances, which, as at present carried on, are revolting to every feeling of delicacy and propriety". Needless to add that decency as well as the oft-repeated decrees of particular and general councils forbid clerics to appear, in any capacity whatever, on public dancing floors."

I think we can question the propriety of a dance sponsored by a religious community of priests.

"Undoubtedly old national dances in which the performers stand apart, hardly, if at all, holding the partner's hand, fall under ethical censure scarcely more than any other kind of social intercourse."

OK, I am not a square dancer, but what follows comes from the wiki entry:

"Square dance is a folk dance...The various square dance movements are based on the steps and figures used in traditional folk dances and social dances of the various people who migrated to the USA. Some of these traditional dances include Morris dance, English Country Dance, Caledonians and the quadrille."

Am I missing something, or does this sound like the kind of dance that your entry from Catholic Encyclopedia says "fall[s] under ethical censure scarcely more than any other kind of social intercourse."?

I hate to belabor the issue but square dances are not just a slight holding of the hand. There is all sorts of contact as can be seen at this video:
http://www.youtube.com/watch?v=I4lxfXltCxQ