It is "critical at this time that Christians stand up for the natural moral law." 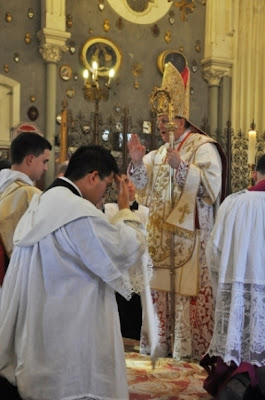 The great prince of the Church Raymond Cardinal Burke, in an interview with CNA, warns that we are well on our way to persecution of Catholics in the United States.  And as usual, he points to the best way to prevent it-- the words quoted in the title to this post.  From AINA:

Vatican Cardinal Burke: 'We're Well on the Way' to Christian Persecution in the U.S.

VATICAN -- One of the highest ranking cardinals in the Vatican has said that the United States is "well on the way" to the persecution of Christians.

Cardinal Raymond Burke, former Archbishop of St. Louis and now the head of the Vatican's highest court, told Catholic News Agency that he could envision a time when the Catholic Church in the U.S., "even by announcing her own teaching," is accused of "engaging in illegal activity, for instance, in its teaching on human sexuality."

Asked if the cardinal could even see American Catholics being arrested for their faith he replied, "I can see it happening, yes."

In his remarks to several U.S. Bishops meeting with him Saturday, Pope Benedict XVI made similarly emphatic warnings about the U.S. The pope told the bishops that "the seriousness of the challenges which the Church in America, under your leadership, is called to confront in the near future cannot be underestimated."

He added: "The obstacles to Christian faith and practice raised by a secularized culture also affect the lives of believers."

In the interview published today, Cardinal Burke declared that "it is a war" and "critical at this time that Christians stand up for the natural moral law." Should they not, he warned, "secularization will in fact predominate and it will destroy us."

Pope Benedict too urged the bishops of the United States to speak out in defense of morality. "The present moment can thus be seen, in positive terms, as a summons to exercise the prophetic dimension of your episcopal ministry by speaking out, humbly yet insistently, in defense of moral truth, and offering a word of hope, capable of opening hearts and minds to the truth that sets us free," he said.

Catholic League President Bill Donohue told LifeSiteNews that Cardinal Burke's remarks were accurate and not exaggerations. "Secularism has become militant," he said. "Many elites are taking an aggressive secular approach. They have lined up against the Catholic Church and other Christian churches particularly for their stand on moral values."

Donohue pointed to New York where gay 'marriage' was passed without debate or exemptions for clerks who objected to having to grant such licenses. He also noted the closing of Catholic adoption and foster care agencies since they were unable to comply with laws forcing homosexual adoptions.

By John-Henry Westen
LifesiteNews.com
Posted by thetimman at 1:15 PM

He had some other interesting things to say too about the sacred liturgy in a Catholic News Agency story.

Cardinal Burke is also responsible for overseeing the Church's liturgy as a member of the Vatican's Congregation for Divine Worship.

He is grateful to Blessed John Paul II and Pope Benedict XVI for giving the Church "a font of solid direction" regarding worship, based on the Second Vatican Council's vision of a "God-centered liturgy and not a man-centered liturgy."

That intention was not always realized, he said, since the council's call for liturgical reform coincided with a "cultural revolution."

Many congregations lost their "fundamental sense that the liturgy is Jesus Christ himself acting, God himself acting in our midst to sanctify us."

Cardinal Burke said greater access to the traditional Latin Mass, now know as the "extraordinary form" of the Roman rite, has helped correct the problem.

"The celebration of the Mass in the extraordinary form is now less and less contested," he noted, "and people are seeing the great beauty of the rite as it was celebrated practically since the time if Pope Gregory the Great" in the sixth century.

Many Catholics now see that the Church's "ordinary form" of Mass, celebrated in modern languages, "could be enriched by elements of that long tradition."

In time, Cardinal Burke expects the Western Church's ancient and modern forms of Mass to be combined in one normative rite, a move he suggests the Pope also favors.

"It seems to me that is what he has in mind is that this mutual enrichment would seem to naturally produce a new form of the Roman rite – the 'reform of the reform,' if we may – all of which I would welcome and look forward to its advent."