Noble Simplicity in the Roman Rite 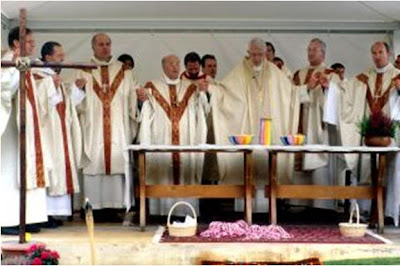 I was reading Rorate Caeli to prepare a post on the ongoing SSPX-Vatican "dialogue" (shout-out to cdg!) when I saw this photo of a concelebration of Mass in the Ordinary Form by Swiss bishops.  The photo depicts the celebrants holding hands while gathered around a couple of what look like sawhorses adorned with the regulation fern and Marek Bozek's tableware.


It appears as though they have the "simplicity" part down cold.  The "noble", not so much.
Posted by thetimman at 10:32 AM

What's that heap between the easter baskets?.

The article where this picture lives sums it all up 'The crisis of the Church is a crisis of Bishops'. Indeed.

What is the thing in the middle? Some sort of Thermos?

And we see the antiquarianism condemned by Pius XII in their “simple table” altar.

As my wife said when I showed her, "That is icky." If they aren't gay (to use the recent dictionary usage), what they are doing is. Wouldn't you be ashamed to tell your neighbors and acquaintances that your son wanted to be a priest so he could do that?

Roy, is your wife referring to the priests holding hands while the Lord's Prayer is prayed?

Why would this suggest they are gay?

Timman, like it or not, God is present there in this Sacrament of the Eucharist.

Please refer back to our Baltimore Catechism, where we read that God does manifests Himself in this Sacred celebration. For you to insinuate otherwise is wrong on so many, many levels.

It is really a sad tragedy that you feel compelled to mock this. Sure, this is not your style - your preference is for a 15th century celebration. God continues to make His presence real in those sacred celebrations as well.

I'm sorry, I grew up with this kind of thing ... it reminds me of the Wonder bread (yes, that's right) and Riunite wine celebrated on the dining room table of our home by, God bless him, a relative who is a Catholic Priest for our Sunday Mass.

At 10 years, one may not know any better but with all my heart I can say first hand that this opens the door wide for liturgical abuse and scandal.

I think our Lord deserves better. My opinion.

mp - My guess would be that Rory might be eluding to is the rainbow 'tableware' which is reminiscent of the gay flag.

Fwiw, I don't see anyplace where Timman insinuated that God does not manifest Himself in this or any other valid Mass. On the contrary -- if he did not think that God manifested Himself in this Mass, I doubt whether he would have posted the picture w/accompanying comment.

Anonymous asked...
Roy, is your wife referring to the priests holding hands while the Lord's Prayer is prayed?

Why would this suggest they are gay?

---She used the term "icky." Perhaps you are looking for more precision? Has anything ever given you what they call "the creeps"? It is more of a spontaneous event than an objective analysis. You suggest the old men holding each other by the hand. Another wonders about the loose pile of pink stuff on the floor. Somebody else notices the color schemes. Tim took note of the "altar".

I cannot objectify ugliness and beauty, but I know we sense it differently according to a correspondence of beliefs. Those who hate a particular art form will tend to disagree in objective matters with those who love the same art form. People who love rap music are seldom ideologically in tune with those who hate it.

For others to embrace, what another finds artistically repulsive, would reveal that between the parties there could be very little hope of agreement on matters philosophical, theological, or political. It wouldn't be a question of diversity, but of ideological conflict.

The continuing pretense of unity between Tradition and Paul VI's reforms IS the emergency! The pretense of unity between Tradition and the Swiss bishops "concelebration" is the continuing reason why for the salvation of souls, the Society of St. Pius X continues its work, being forced to respectfully, but publicly resist Peter. Any true, real, worthwhile reconciliation with Rome is impossible if it means that Tradition must pretend to be compatible with what those Swiss bishops represent.

"Ignoble banality". Ever known a scuffy bachelor with dandruff on his shoulders and no taste at all?
Here is a "happening". Don't you want to just give then a big slap of the face and say look in the mirror Father Combover! Their reply "inside this old body is a hippy in rebellion"! "Be what you want be. Do what you want to do yhhhhhhhhh".

Boy, IF you hate this, you should just imagine how the early Masses were celebrated in the catacombs around the Mediterranean! Or the simplicity in which Jesus celebrated with his 12 friends at the Last Supper. (No, I'm not talking about how Hollywood or 16th century painters depicted it, but how the Jewish community typically celebrated the Passover 2,000 years ago, often while resting on dirt floors.)

Oh yeah, I forgot. Jesus didn't do it the right way - the "right way" was established some 1500 years later in a different language than that which Jesus used, in gothic cathedrals that couldn't be imagined in His time, where the intimacy part of our relationship was scrapped in favor of the transcendent part of it.

Face it, folks, the Mass has been, and will continue to be, in fluctuation over the centuries. Obviously, some of those celebrations do not appeal to all tastes - most of us would be shocked at the rudimentary and even tribal ways it is currently being celebrated among the 1 billion Catholics today. However, to be openly condemning of the way the Sacrament of the Eucharist is being celebrated, when Jesus IS with us whether or not we like it, is unChristian, un-catholic (small c), and unworthy of us.

There is a difference between saying Mass in the fields of Ireland, the catacombs of Rome, or a hood of a jeep in Normandy, and what you see those Swiss bishops doing.

It is this. The Swiss bishops are choosing ugliness. The faithful in difficult times are warmed and lifted up by the knowledge that they are doing their best in times of poverty or persecution. Until recently, the Church has always known that in times of prosperity and freedom, it honors God to celebrate Mass with our best decorum and costly furniture.

No one has ever thought that the catacomb Masses were a dishonor because there was no choice, and the faithful knew it. No one then could have dreamed that any Catholic, in times of freedom and prosperity, would argue that their persecution Masses should be a universal model worthy of imitation in the best of times.

To deliberately choose to use ugly, tasteless, and cheap articles, or to say Mass at a "Lord's Supper table" in imitation of the First Mass is nothing that any persecuted Catholics would have ever recommended.

It is outrageous to suggest that loving the First Mass or persecution Masses is incompatible with a love of beautiful and ornate buildings, furniture and music. To WANT a persecution style of Mass is to show a WANT of regard for the glory of God and places one outside of all Catholic Tradition from the First Mass until now.

Again, I think this demonstrates my little theory about how deep ideological divides will be mirrored with deep artistic and aesthetic divides. If we are divided on what is good and beautiful, we will be divided on what is true and right. Many voices have been heard crying for simplicity, rudimentary, or even tribal ways in Catholic worship in the hopes that the "saved money" could go to the poor. It reminds one of a certain infamous disciple who was present at that First Mass.

Those who despise what Fr. Faber called, "the most beautiful thing this side of heaven", can never hope to have spiritual or ideological unity with those who agree with Fr. Faber. To further illustrate how wide is the divide between Tradition and Novus Ordo "simplicity", I have to say that I would be hard pressed to find anything shoddier than the Swiss bishops Mass this side of Grange Hall Baptist Church.

Can someone dig a bit deeper besides what seems like hundreds of presumptions? OBVIOUSLY, this is NOT inside a gorgeous church or chapel, and there has to be a reason for that. It almost appears to be in a tent or raised platform, but cropped so that we can't see the wider context for it.
Was it inside a hotel for a national conference? (I became a 4th degree Knights of Columbus brother under a very similar hotel setting in STL.) Was it in a field? Was it during a youth rally, or to celebrate the end of a youth retreat?
Despite our biased views, everything there was chosen, right or wrong, and signifies something.
Why, for example, is there what looks like a tiki torch - is this in Hawaii? Was it a prop used throughout a talk, a sermon, or a full retreat?

I suspect the purple chain is the type of thing that children make, gluing together pieces of paper where their pious, innocent and holy prayers are written on it, and offered during the Sacrifice of the Mass? Linking them shows that we all are united in praying to God to meet our needs.
There also are papers in at least one of the baskets - are those the names of deceased family members? Prayers for unborn children who were aborted?
The cross - does it have a local connection that outsiders wouldn't know, like using two poles from a church that recently burnt to the ground? Is this Mass being celebrated on the site of a burnt-out church, thus the make-shift nature of it? Is the table made up of the remaining timber from pews that weren't burnt?
Are the red flowers on the plant a sign of Christmas hope similar to the poinsettia?

To mock without knowledge is simply lazy. Timman - can you scratch below the surface here, or do we simply need to think that the only "true and right" Sacrifice of the Mass must exhibit the "best decorum and costly furniture," as if God is pleased with how much money we spend? (I remember going on dates where that is what the woman used to judge me as their suitor, and I chose never to ask them out a second time.)

And those who think that the spending of money and outward appearance is what truly matters here have totally bought into a materialistic and capitalistic culture. And that, my friends, is NOT the ideological side I would ever want to fall into!