The Administration's Outreach to Catholics: "The aim is to isolate rather than destroy." 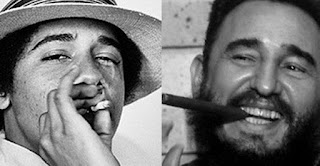 My brother tipped me off to this excellent article at Crisis Magazine, comparing (I didn't say contrasting) the policies of Fidel Castro and his fellow traveler in the White House towards Holy Mother Church.  Emphases and comments of my own added:

To Isolate and Marginalize: Obama takes Cue from Castro


Next week, Pope Benedict XVI will visit Cuba in an effort to repair relations between the country and the Church. Perhaps he should pay a visit to the United States as well.

As the Papal visit draws near, there is cautiously brimming hope that the Church will be able to make further strides in Cuba. There have even been whispers of the impending conversion (or reversion) of Fidel Castro, who was excommunicated in 1962.

Such is the state of a country that has actively rejected and persecuted the Church for fifty years.

There is, to be sure, a real and vicious persecution of the Church in Cuba, but it wasn’t always so egregious, or at least it didn’t seem that way at the beginning of Castro’s regime. American Catholics would do well to take note.

A 1960 article by London Observer correspondent George Sherman (here printed in the August 6, 1960, edition of the Pittsburgh Post-Gazette) details Fidel Castro’s strategy for the Church just a year after he became Prime Minister:


“The Castro government has moved carefully so as not to gain the Church sympathy it does not have. The aim is to isolate rather than destroy. While upholding the right to worship, the Government has clamped down on all the Church’s outlets in secular society.”

To isolate rather than destroy. To allow worship…and nothing else. Sound familiar? It should.

President Obama began using the term “freedom to worship” in his speech at Fort Hood in 2009, less than a year into his presidency. And he and his administration have notably continued to use this language—as opposed to “freedom of religion”—a significant difference in terms.

In his piece from fifty years ago, Sherman noted, significantly: “Priests are the first to admit that large sections of the population have little religious training.” In other words, Castro pounced when the Church was already weak. Many so-called Catholics likely didn’t notice any changes. They likely agreed with Castro over the Church on certain policies. And the faithful? Well the faithful, recognizing their reduced numbers and the potential dangers the Castro regime brought, were concerned . . . yet happy they were “allowed” to worship.

And, just like that, the Catholic Church in Cuba was reduced to a bunch of harmless, pious old church ladies. Catholics could still worship, sure. But the hospitals, orphanages, schools, etc. that were run by the Church were taken over by the state. Soon after, Christians were barred from participating in government.

The Church in America is weak. Secularism has been chipping away at it for decades. (This of course is true, but sidesteps the unpleasant task of identifying the real villains within the Church who destroyed the liturgy, doctrine and discipline.)  In recent years, many Catholic orphanages have closed after being cut off from public funds because they would not promote abortion, contraception, and the like. And we already know the precarious state of Catholic hospitals and colleges.

Sherman’s observation was dire, terrifying, and prescient . . . and it still applies today. Perhaps the Church is stronger now in the United States than it was then in Cuba, but not exponentially so (and this only if measured by organization-- for the faith is undoubtedly weaker). The Church here is indeed struggling. The bishops, led by Cardinal Dolan, have spoken out, but then again, as Sherman tells us, two of the leading archbishops in Cuba “demonstrated publicly against Soviet influence.”

For the Obama administration, just like in Castro’s fledgling Cuba, it is merely a matter of tactics. How to isolate the Church without inciting a riot. [...]

Modern liberalism relies on a secular society, and a Church that is active in the world throws a wrench into the liberal plan. Castro recognized this and moved to “isolate” Catholics and Catholicism, allowing them to worship, but nothing more. Christians were barred from participating in politics. Christmas was even cancelled.

Now, in a series of moves eerily similar, if not in actual implementation then in spirit, to those of the Castro regime, Catholics in America are facing the same isolation that Cuban Catholics experienced fifty years ago. It started slowly and somewhat innocuously. A token acknowledgment of the “freedom to worship,” or some such meaningless phrase, and then it came quickly and relentlessly. A weak Church subsumed and subjugated by a powerful government (the vaunted "fruits of Vatican II"). And the people were powerless against it.

[...]
It won’t move as quickly as it did in Cuba (I respectfully disagree; when the action comes, you will see tissue-thin resistance and all is weakness)—the American political process doesn’t allow for such swift action—but it can still happen fast (remember, the HHS mandate, promulgated by executive fiat will go into effect in August). And there could be some more resistance considering that the Church is a bit stronger here than it was in Cuba in 1960, but not much.

And where Castro attacked the Catholic Church, Obama and other liberals aren’t targeting the Church per se…just its tenants, members, and institutions, while including other Christians in the mix.
But make no mistake. This is happening. It’s the blueprint. Certain aspects of the design have changed over the years, but it is largely the same: Isolate, and then marginalize. And it works. Today, though 60 percent of Cubans are Catholic, only about 5 percent go to Mass.

A recent piece in USA Today discussing the bishops’ latest rejection of the HHS mandate noted what the bishops did not say: they did not accuse the Obama administration of “waging a war on religion” or acknowledge that Republicans have abandoned the cause. And, significantly, “There is no talk of civil disobedience or canceling health insurance . . . if they do not get their way.”

At the end of his piece in 1960, Sherman quoted a prominent (and downtrodden) member of Catholic Action: “Nothing can be done without force, and we do not have that force.”

We have the benefit of history. We cannot make the same mistake. We cannot sit back, hoping for the best, putting our faith in politicians. We must strike back—all of us—with the full force of God and His Church.

Before it’s too late.


I am convinced that only the triumph of the Immaculate Heart of Mary, foretold at Fatima, can end the persecution we have justly earned.  Pray for the Holy Father to consecrate Russia to Mary's Immaculate Heart, in union with all the world's bishops.  This is what Our Lady asked for, and this remains to be done.

Immaculate Heart of Mary, pray for us!
Posted by thetimman at 2:54 PM

So are you saying that when JPII Consecrated Russia to the Immaculate Heart of Mary, that it was not valid?

Interesting article, but while identifying a problem is necessary, it is not sufficient. The pertinent follow-up question is: What are we - not just the bishops - going to do about it?

Prayer is the obvious first thing, but there are a number of tangible steps, too:

1) Write polite-yet-firm letters to the editor, stating the case for the Catholic view on the debate of the week. Use plenty of secular arguments in those letters, because while moral/theological arguments are certainly valid, they are not very compelling to a society that believes Church teaching is obsolete; incorporate convincing secular arguments, and after a while, secularists have to start wondering "What is it about the Church that allows it to be right on this issue, even in the face of conventional wisdom?"

3) Ask your priest for permission to set out a few copies of apologetics literature in the pews before Masses. Our Sunday Visitor, Liguori Publications, and Catholics Come Home, Inc. have some excellent materials I can recommend. (Admittedly, if your parish is the Oratory, most of the parishioners are probably already familiar with Church teaching.)

4) Donate Catholic apologetics books to libraries, student groups, flea markets, and book fairs. Pick a local RCIA program you like and donate materials to it. The Daughters of the Mother of Peace do door-to-door evangelization work in St. Louis - donate funds to them.

5) Make discussion of Catholic topics a part of your conversation in restaurants and other public spaces. It is amazing how much people pick up on conversations at the neighboring table. Goodness knows how many critiques of the Church I've heard in such places.

These are only a few ideas. Imagination, and occasionally dollars, is the only limit. The overarching principle we have to have when addressing Church critics is to first acknowledge their sincerity, because if we do not, it is human nature to tune out immediately.

I understand the critiques of Vatican II, but I do not believe it adequately, or even mostly, explains the fix the Church is in today; after all, lax faith practice and schism go back to apostolic times. My hypothesis: By the 1950s and early 1960s, the Church in America had finally reached the "promised land" of acceptance by American society, and a Church of growing schools and parishes was booming. The Church probably got a bit complacent, feeling no need to explain the "whys" of the faith, but rather administer its growth. However, Vietnam and Watergate made Americans unsatisfied with not knowing "why", and the Sexual Revolution placed a nice, new, juicy apple on the Tree of Knowledge just waiting to be taken. Secular society was giving people an answer they very much wanted to hear, and the Church was simply assuming people knew the truth. None of that is specifically a function of Vatican II - if Vatican II never happened, are we sure things would be so different today, at least in terms of substance versus appearance?

Again, I very much appreciate the zeal here, and I apologize for going through my book-length opinions before recognizing that. The key question is, how can that zeal become the basis for reaching people where they are at?

I agree with your sentiments to a point: things would probably still be less than optimal without Vatican II if the poor catechesis (and the consequential lack of a spiritual life for many Catholics) of the 40s/50s had been left untouched.

However, I do think that the ambiguities and misinterpretations thereof in Vat. II documents certainly added to the problem - namely, through the de-emphasizing of catechesis even further and the Church growing more comfortable in the ways of the world, with a further loss of Catholic identity (esp. through the relaxing of certain disciplines, such as abstinence and fasting, and the emphasis on ecumenism).

But most importantly, if the Mass had not been changed as it was, it would be a lot easier for Catholics to notice two things that most do not notice now: 1) we are different from Protestants; 2) the Mass is a sacrifice (with the corollary of the need of expiation for our sins). And, realizing those facts from the very existence of the Mass, it is more likely that those who remained at least every-Sunday churchgoing Catholics would be in a better position to resist this kulturkampf than the average every-Sunday Catholic is today, at the very least. Basically, the catechetical value of the old Mass itself, had it not been altered, would have placed us in a better position than we are at present.