Gratitude in Matters Great and Small 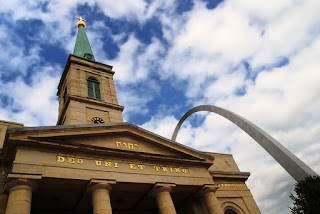 I don't think I jinxed the Cardinals last week when I posted about being spoiled by good baseball in this town, but they sure seemed to take the opportunity to stop playing good baseball ever since.

I didn't take last night's loss too badly, because I immediately reflected on the fact that a very flawed team took its measure of talent and circumstance and still nearly went all the way, just a year after losing the second best player the team ever had, its manager, and several key players to injury.  Count your blessings, I said to myself.  How many fans in other cities would take the last thirteen months in exchange for a lifetime of disappointment (yes, I'm talking to Cubs fans)?  And the situation in St. Louis, baseball-wise, looks good for the foreseeable future.

Because as a Catholic matters of the temporal world always provide fodder for the spiritual life, if we just look at them in a different way, the above reflection made me think about the state of the local Church.  Principally, I reflected on the loss of our "manager" and "key players" in the last several years, and the effect their departure has had on the local scene.

Between 2004-2008, so much good was done on so many fronts of Catholic restoration in this Archdiocese that it was hard to keep track.  Not only did the traditional Mass Apostolates grow, receive new and bigger Mass locations, and attract scads of new members, but in every area of the Church there was measurable improvement.  The seminary became a beacon of vital, orthodox teaching, with growing numbers of seminarians-- particularly from this Archdiocese.  Devotion to the Eucharist and to the Sacred Heart were consistently encouraged.  The tenets of the faith, and the laws of the Church were defended against heresy, schism and dissent.  The flock was shepherded by a caring shepherd who did not live in the world of ambiguous formulations of the teachings of Christ-- he stood by the "hard sayings" that make up part of the "easy yoke" and "light burden" of the faith.

Cardinal Burke's policies defended the faith, provided clarity, and embraced the whole of Catholic Tradition.  His policies were vindicated by the actions of the Holy Father.  Cardinal Burke was ahead of the curve on the motu proprio Summorum Pontificum.  He was ahead of the effort (late in coming as it was) to hold Catholic politicians to their faith in the exercise of their offices and to stand up to the anti-Catholic secular government.

Because he led, the faithful followed.  Because he was faithful, he was attacked.

But Catholics were grateful for their shepherd, and I for one started this blog to do whatever small part I could to defend and support him.  Over the years, this blog has done some good, and some bad, and has mostly been lame.  But I don't regret starting it or writing it.

Since the Cardinal's elevation and departure for his post at the Apostolic Signatura, the momentum has waned a bit.  Mr. Bozek continues to draw his check in a Church that is not his.  Cardinal Burke's enemies in the press, the community and (unfortunately) in the Church have lost their timidity.  The seminary has lost key faculty and there is a drop in local vocations.  Though the traditional Mass Apostolates remain and are still growing, the rate and momentum of growth are less.

The Burke reign was like a powerful and refreshing wave that hit the beach, seemingly out of nowhere.

Waves hit the shore, then recede.

It would be easy to point out the lack of the powerful wave these days, just as it would be easy for a Cardinals fan to focus on last night's loss and the departure of the old manager and key players.  I know it's easy, because I've done it.

Use this blog as an example:  It still gets an amount of daily readership that is humbling to me, and which boggles my mind.  But when Cardinal Burke was here, and when the growth of the traditional Mass really took off, the regular readership was about double what it is now.  Moreover, my energy and desire to keep writing it were about ten times what they are now-- no doubt you've noticed.

And back then Saint Louis was not only relevant in the current events scene of the Universal Church, it was actually a beacon of hope.  A leader.  A light to others.  In addition to more empirical measures, I personally know many people to came to live in St. Louis just because of the excitement of what was happening here.  Some have now moved on, each for reasons unique to them, I guess.  And St. Louis has resumed its role as a walking "slow news day".

But I think that is not the right way to look at it.  And it is time for some gratitude.

When the tide is rising, each wave that hits the shore does recede.  But the next wave hits higher.  And if you move back to your spot on the beach without taking this fact into account, you will get washed out to sea-- or at least very wet.

Hence, in this time of waiting for the next wave, I resolve to be grateful.  Grateful for what we had, yes, but also grateful for what we have now.  I came to the Traditional Catholic party very late, and it was easy to be spoiled by the magnitude of recent success.  But if you could have told some of my friends who lived through 1965 1969 1984 1988 that in 2012 they would have a stable and beautiful place to attend the traditional Mass and an Ordinary who would leave them alone to do just that, they would have jumped for joy.  So I am grateful for the present good.

But more than anything, I resolve to be grateful for what is to come.  After all, Christ is victorious.  Nothing and no one can stop Him.  All that is to come is from His will.  And I believe Mary's Immaculate Heart will triumph, as she said at Fatima. I know that the wave that no worldling can withstand is coming; whether there is much or little suffering that we must endure before it comes is irrelevant.

So, I will write on through the days between, and I thank you for reading here.  Hopefully we will all be there to witness the better things to come.
Posted by thetimman at 5:37 PM

No, not a farewell, anonymous. Just the opposite.

Thank you Timman. I am so grateful for your blog. I check it daily because it keeps me fighting the good fight. My son was in the men's choir at the Oratory for about a year when he was in college and he asked us to attend Mass there several times but it "was so far away" and "we would have to get up so early" and "we would have to get so dressed up" so we only went once and in jeans, as we were completely uneducated in the goings on. The Mass took "forever" and we had no idea what was going on. I had been catechized in the Latin Mass from 1956 to 1960-something and thought it would all come back to me but I was lost and kind of disappointed that it didn't all come back to me, so we didn't go again. A little while after that, I found your blog and decided to try it again. I bought a 1962 missal and persevered until I began learning and following. I was hooked! I cannot make myself go to NO Mass now; it actually repulses me (I know it is a valid Mass but...). Canon Huberfeld actually told me to sit in the back and say the Rosary during Mass if I had no choice but to attend one. So, you see, your blog has had a huge impact on me and my husband. Unfortunately and regretfully, my son had to leave the choir due to school schedule changes and has never gone back to Church. How I wish we had accompanied him when he asked. I'll never forgive myself for that. But thank you again for recruiting us to the faith as it was always meant to be experienced. And now the new classes on the Faith and using the Missal!!! How fantastic! Yes there is always something to be grateful for. We can never forget that and cling to the virtue of hope for the next wave.

Sir,
A very thoughtful post and some great perspective. I think we tend to credit - and expect - superhuman impact from our bishops, when in reality there are probably dozens of small interactions parishioners have each week in their lives that influence the vibrancy of their faith more than the local ordinary. After, the bishop/archbishop cannot teach every catechesis program at every parish, he cannot personally respond to all of the various critical commentaries on the Church from local blogs, he cannot be in every office conversation where someone seems to offer a perfectly sensible counter-argument to Catholic teaching, etc., etc., etc.
So, if we sense that the tide has moved out (and being an engineer, I would have to see the quantifiable data of the past few decades to draw any conclusions - I admittedly have yet to be convinced that sourcing the current struggles of the Church to Vatican II is not a case of correlation without causation), the most useful question we can ask is "What are we going to do about it?" After all, the bishop/archbishop cannot be everywhere, but the faithful can.

Thanks for the great comments!

Commenting on just one portion of your article... Cardinal Burke was the greatest cheerleader that Kenrick-Glennon Seminary had in many years. He was dedicated to growing the number of seminarians and he was quite successful at doing so. Cardinal Burke's successor, Archbishop Carlson, came with new ideas for the seminary even though recent years had shown the seminary to be in healthy and holy standing. It was considered one of the finest seminaries in our region. Archbishop Carlson’s first new idea was to bring in his former spiritual director of many years, Fr. John Horn, S.J., as the new President/Rector. In the November 2011 Serra Club of St. Louis newsletter, Fr. Horn was quoted as saying, “He doesn’t know how long he’ll be here, but it will always be with the intent of turning it back to the Archdiocese when the time arrives, which is the role of a Jesuit missionary.” It seems both of these men believed the seminary to be going the ‘wrong” direction (the direction Burke had set in motion) and from that, it had to be “saved” by Jesuit missionaries. Since that time, two dioceses have stopped sending their seminarians to KGS for priestly formation. Some faculty departed the seminary on their own, unwilling to go along with the new direction; other faculty and staff were, essentially, “shown the door” by the new regime as they didn’t fit the new program. A few good faculty and staff remain, though their influence has ebbed. I am certain Cardinal Burke is aware of the current state of the seminary, but I am not sure there is any direct action he can take.

You said, “The Burke reign was like a powerful and refreshing wave that hit the beach, seemingly out of nowhere. Waves hit the shore, then recede.” I pray the seminary will not be lost before another refreshing wave rolls in.