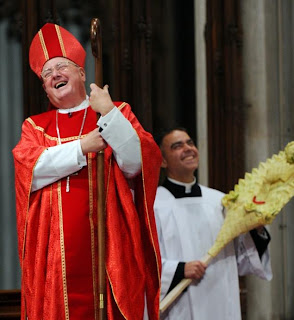 The Mass was celebrated by Cardinal Dolan.  The story does not say who gave Vice President Biden Communion.  From the full story:

Dolan and Biden had coffee after the service, though neither addressed the press.
Posted by thetimman at 1:01 PM

"Unlike his predecessor, Dolan does give communion to Catholics who stray from church dogma on abortion policy, saying he prefers to persuade them in discussion rather deny them the Eucharist."

This is appalling. He can't "persuade them in discussion" without also giving them Holy Communion?

How is this different than going on record as, in effect, rejecting the teaching that Holy Communion is (among other supremely significant things) a sign of unity of belief? How is it different than taking the prevalent Protestant view that Communion is merely a kind of spiritual vitamin supplement?

What gives anyone the right to abuse the Blessed Sacrament in this way -- and for the abuse to be so egregiously thrown in the face of the Catholic faithful to boot?

Oh, how I hope and pray that our new Holy Father will deem it an urgent order of business to deal forcefully with Dolan and the others of his ilk.

They enjoyed coffee together, laughing all the while.

And people thought he was papabile. His midwestern American affability isn't enough. I saw him in line to take the oath (whatever). He looked around himself at the Cistine chapel in such awe. And of course, he has no foreign language ability. I saw him look bored and wanting to sit at the Musial funeral. Maybe he has a knee problem..?

And he dines with the enemies of the Church. And he won't stand up to them. Quit being a politician.

The beginning of Wisdom
Is Fear of the Lord,
So Wisdom with age?
I’ve seen no accord.

So you’ve lived many decades
Seen the world more than twice.
But what have you learned?
That sinners are nice?

And compels one to lift
His goblet of wine
To toast all we want
And make want what is mine!

So all in modern
Society
Shall acknowledge their versions
Of propriety.

And when you die,
They’ll bring goblets, blessed lockets
But they’ll realize too late…
That the shroud has no pockets!

Jane said "Oh, how I hope and pray that our new Holy Father will deem it an urgent order of business to deal forcefully with Dolan and the others of his ilk."

Have you not read anything about the direction Francis appears to be heading? I think the heierarchs who will be dealt with forcefully are the ones who wear white gloves, galeros and capa magnas.

He's all about building bridges, entering into dialogue, and bringing back a sense of Gospel living, as was certainly the case with his namesake. Francis then and Francis now have no time for silk and lace.

Remember the old song "I wanna be loved by you..." looks like Crdnl Dolan and his ilk need the adulation of powerful politians more than they need to protect the Blessed Sacrament from those who mock the real presence of Jesus.
Did I mention this before?

He's not all sunshine and smiles, you should see how reverent and solemn he was at the Holocaust museum. He has his priorities.

I think that it is much too early to be making sweeping assumptions about the direction Francis appears to be heading, which many were doing before the white smoke had even dissipated.

Thus far I have found reasons to feel encouraged, and hopeful that Francis may, in fact, have the boldness and fortitude to be tough with people like Biden, Pelosi et al, as well as with enemies nearer to or within the Vatican, including those -- still unknown to the public -- who conspired to make Vatileaks happen.

Among the reasons I have hope is the following statement (of which I'm sure all here are aware) from a document presented by then-Cardinal Bergoglio on behalf of the bishops of Latin America, in 2007:

“We should commit ourselves to ‘eucharistic coherence’, that is, we should be conscious that people cannot receive holy communion and at the same time act or speak against the commandments, in particular when abortion, euthanasia, and other serious crimes against life and family are facilitated. This responsibility applies particularly to legislators, governors, and health professionals.”

God bless Cardinal Tim. To share this little ditty would seem appropriate to this post, a spoon full of sugar and all that.