The Def Comedy Jam of Outrage 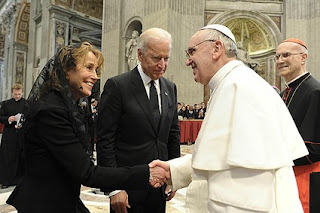 A reader sent me this email today:

While the St. Louis Catholic bloggers are getting their shorts in a knot over the Traditional Latin Mass versus Novus Ordo and whether women should be allowed to wear pants, the Vatican is giving Holy Communion to Biden and Pelosi!  Two high profile pro-abortion, pro-queer marriage [sic] proponents get a pass on receiving the Eucharist. Have Magisterium and hypocrisy crossed paths or is Magisterium applied selectively?

This story really hasn't made news headlines, so I guess I would ask to be excused from the outrage at my lack of prior outrage. I dialed up a google search and found only this story at life news and one other story on the subject-- neither were in the mainstream press.

The photo above is of Biden and his sister in audience with Pope Francis.  Yes, she is wearing the proper headgear.  No, this doesn't get Biden out of trouble for receiving Holy Communion sacrilegiously.

As to the reader's question about whether "Magisterium and hypocrisy crossed paths", I'm not sure what is meant.  If the question relates to the fact that a bunch of apostates and/or heretics sure seem to get away with stuff, then yes.  If it implies that I am my own Magisterium, I would respectfully decline the reference.

The silence, on my part, was from a lack of knowledge.  Pointing out the facts in this case does not create scandal, unless the scandal is the utter lack of enforcement of the norms for the reception of Holy Communion.  If that is a scandal, it goes back now decades.

As a parting shot, I would say that I noticed in stories published in the run-up to the Pope's Coronation Ceremony marking the beginning of his Petrine Ministry, that it was announced that His Holiness would not personally distribute Holy Communion.  I remember thinking to myself that perhaps it was to avoid the possibility of giving it (or refusing it, for that matter) to Biden or some other public dreck.

So, there you go, gentle reader.  I agree with your outrage, though for true outrage to register doesn't it have to also surprise?
Posted by thetimman at 2:18 PM

“And the Word made Flesh”
For “excommunication”
But flesh wouldn’t say…
So exoneration.

Nor did flesh demand
Or articulate
Only “morally-bankrupt”
Not “excommunicate!”

In the land of the blind
One-eyed man’s king
But on his head
Autumn blood will cling!

My email was not directed at your Magisterium. The scandal is the utter lack of enforcement for receiving Holy Communion.

But, I shouldn't be shocked and outraged. That would be being judgmental and that's not PC.