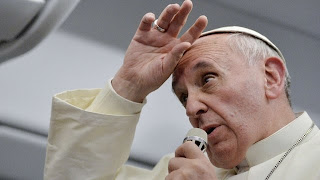 I had business to attend to earlier today, so by the time I type this the usual spin doctors of damage control (principally neo-Catholic varietals) and damage exploiters (principally sodomy-enablers) have parsed the Pope's "off-the-cuff" remarks of today.

What did he say?  Well, it goes without saying that His Holiness cannot, and did not, change any Church teaching on the grave immorality of sodomy, or habitual sodomy. He reaffirmed this teaching.  But he unfortunately did give fodder to the Church's enemies by inexact language.

He is quoted as having said, "If a person is gay and seeks God and has good will, who am I to judge them?"  Well, of course if this is understood in a certain way, it makes sense.  The problem is that every person who would in fact understand this remark in the correct sense doesn't need to be told it, yet so many-- the vast majority, in fact-- who hear or read this will take it as an indication that the teaching on sodomy has changed or will change or can change.

It can confirm persons in sin; it tends to discourage the faithful under increasing attack from the world.  Particularly, it can discourage those persons with temptations to that particular sin to wonder whether they need to continue to resist.  Already the story is reported that the Pope won't judge "gay people", and some are reporting it as "gay priests".

Thus, these comments seem quite inopportune.  The only real question is whether the Pope made them innocently, or intentionally.  I don't know which is worse.  Popes and airplane press conferences don't seem to go together.

Francis also commented that the role of women in the Church can't be limited to just being altar girls... "there must be more."  Terrific.  I guess we won't see the end of altar girls soon.  Maybe when the novus ordo finally bites the dust.  We can only pray we don't see the foisting of deaconesses on the Church; the Church is already effeminized enough.

Into all of this mix is the stunning decision of the Congregation for Institutes of Religious Life, approved in forma specifica by Pope Francis, greatly limiting the right of the Franciscan Friars of the Immaculate to celebrate the traditional Mass.  Rorate has the story, and frankly, does a fine job of giving the facts, the text of the decree, and the spin-doctoring surrounding it as well.  All told, it does not bode well at all.  Of course, one can limit this decision to its facts-- that hardly seems the point.  It speaks to the mind of the Holy Father, or at least as to the power of those within the Curia who hate the Mass.  Read and pray.


The decree installs an apostolic commissioner - in the person of the Capuchin Fidenzio Volpi - at the head of all the communities of the congregation of the Franciscan Friars of the Immaculate.

And this in itself is cause for astonishment. Because the Franciscans of the Immaculate are one of the most flourishing religious communities born in the Catholic Church in recent decades, with male and female branches, with many young vocations, spread over several continents and with a mission in Argentina as well.

They want to be faithful to tradition, in full respect for the magisterium of the Church. So much so that in their communities they celebrate Masses both in the ancient rite and in the modern rite, as moreover do hundreds of religious communities around the world - the Benedictines of Norcia, to give just one example - applying the spirit and the letter of the motu proprio “Summorum Pontificum" of Benedict XVI.

The Vatican authorities responded by sending an apostolic visitor one year ago. And now comes the appointment of the commissioner.

But what is most astonishing are the last five lines of the decree of July 11:

"In addition to the above, the Holy Father Francis has directed that every religious of the congregation of the Franciscan Friars of the Immaculate is required to celebrate the liturgy according to the ordinary rite and that, if the occasion should arise, the use of the extraordinary form (Vetus Ordo) must be explicitly authorized by the competent authorities, for every religious and/or community that makes the request.”

Posted by thetimman at 4:29 PM

But we are called to Pray, pray and Pray ...Our Lady told us to pray for the Holy Father very much.

God have mercy on us all!

Just like your opponents, you hear only what you want to hear. Join the SSPX or some sedevacanist group already!

Thanks for the advice, but no thanks. Do you really want me to join the SSPX or a sedevacantist group?

And I doubt they'd want a guy like me anyway.

But seriously, what did I write that made you comment that way? Did I not specifically say that the Pope did not change any teaching and that the words were merely inopportune?

It can be easy, as you said, to hear only what we want.

I recently read that Pope Francis said we need to "make a mess in some dioceses." What does he possibly mean by that?

When you see the words "The Holy Father has directed" .. you can be guaranteed that the end of the sentence will contain some traditionalist target.

But when it comes to dissident groups, gays, Muslims, atheists, Jews it's "I'm just Bishop of Rome, whaddya want me to do about it?" and "let a 1000 flowers bloom".


This Pope has become a "hermeneutic war-a-minute".

"Do you really want me to join the SSPX"

What doesn't kill us makes our drinks stronger!

Timman, unless Cbalducc’s comment is tongue in cheek, (s)he obviously does not speak for those sympathetic to the Society of Saint Pius X. Indeed, to put the SSPX in the same sentence as ‘sedevacantist’ is to underscore a seriously incomplete understanding of the Society’s position. Indeed, when white smoke rose in the Vatican announcing the naming of the new Holy Father, bells rang at the Society schools in jubilation that the Holy Ghost provided His Church a successor! There was genuine joy ... so really Cbald, you are off center here.

The recent news of the day underscores what the Society has stated for many years to be a crisis in the Church, and His Excellency Archbishop Lefevbre knew this, and consequently took actions to help preserve the historical tenets of the Faith against heretics and heretical teaching. There is no joy in this; it would be much easier to have a welcomed admittance into the grand ballroom than to wait outside the foyer, but the loss of the Faith among the faithful because of the V2 train wreck persists.

One wonders what the directive of the Holy Father to the Franciscan Friars of the Immaculate potentially means for similar orders and institutes? Should we now anticipate the actions of a progressive Archbishop in his diocese, wishing to follow the Holy Father’s example, demand the same for traditional communities within his jurisdiction to comply in the same manner? What of our vital Institute of Christ the King in Saint Louis or the FSSP in Quincy, Illinois? I wonder how these orders and communities would react? How should the Faithful respond to such a pronouncement?

Certainly I understand your point. Though you did not intend this, I would note that in pointing out the widespread loss of faith among the faithful, it might be misconstrued by a reader that the SSPX is waiting-- in a psuedo-Wliiamson way-- for everyone else to 'convert' (however that is defined) before agreeing to join the ranks of the canonically regular. If that is so then that is wrong. Being Catholic does not depend on waiting around for others to be Catholic too.

As for the ICRSS, I doubt that it would arise due to the unity of the society in charism and liturgical ethos. Still a relatively small society, there aren't any priests agitating for anything but the Traditional Mass. Their liturgical praxis is written into their constituent documents specifically approved by the Holy Father; then there is Summorum Pontificum; then there is Quo Primum; and I suppose after that there is Immemorial Custom.

No, I don't fear for the traditional societies dedicated exclusively to the TLM. It is the bi-form-al ordersand diocesan priests all over the world that are easy targets. In a very tough milieu, these men are heroic. They have no cover from the zeitgeist of today.

We should pray for them and all priests.

Remember too, that the Mass is God's work. He wills that it be preserved, in His mercy. Confidence and perseverance.

I apologize for the harshness of my comment, but one thing that bothers me is the tendency to take the Pope's words and put the worst possible "spin" on them. For example, when "timmerman" posted this:

"Francis also commented that the role of women in the Church can't be limited to just being altar girls... "there must be more." Terrific. I guess we won't see the end of altar girls soon. Maybe when the novus ordo finally bites the dust. We can only pray we don't see the foisting of deaconesses on the Church; the Church is already effeminized enough."

to me he seemed to imply that Pope Francis was opening the door for women priests.

Why do people tend to think that the Pope (whoever he is) has the power to purge the Church of its problems? For goodness sakes, Pope Francis has only been on the job a few months, and already he's being praised or damned as a leftist radical.

I really don’t think the reader would have thought that I implied the SSPX is waiting for everyone else to “convert” before agreeing to be regularized.

My point in a nutshell is that the Ecclesia Dei commmunities may indeed have reason to fear precisely because of the news about the FFI ... and Immemorial Custom was pretty much thrown under the bus at V2.

In other news, Pope leaves beach ball and jersey on Altar. No crisis here.

Not at all. First, your tone was fine, no worries. Secondly, since I'm not a sede, I didn't mean to imply that women priests were on the table. That's impossible-- and he stated this in the press conference. I meant just what I said-- deaconesses would be disastrous, but these are a technical possibility without holy orders. And I wouldn't put it past many in the hierarchy to push that.