How John Paul II Led Me to the Traditional Mass, Vol. 1 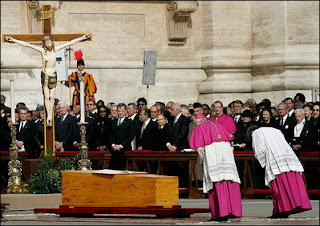 The title of this post is not a misprint, though it is intentionally provocative.  In a certain sense, John Paul II made me a traditional Catholic.  I have told friends this story before, but have not posted it here.  The recent canonization announcement is enough of an impetus for me to do so now.

And it may come as no surprise that what was intended as a single post became, as I wrote it, too long for a single post.  So, first up, some of my thoughts on the canonization itself.  Next installment will be my own tradversion account.

For faithful Catholics, the announced canonization of John Paul II produces feelings of joy in some, outrage in others, and perplexity in the rest.  I understand each reaction.  Let me explain:

Certainly, the late Pope did, and allowed, much that was scandalous in his reign.  Some of these things are so infamous as to be summed up in simple slogans-- e.g., Assisi, kissing the Koran, altar girls.  Loads of disastrous episcopal and cardinalatial appointments.  And the devastating clerical abuse of minors regime occurred on his watch, with scant evidence of any effective correction taken.

Certainly, he also did much good, principally by being a tireless advocate of what he called the Gospel of Life, and by standing against the tide of Communism.

Then there are actions that, like so much of the modern history of the Church, could be seen as good or bad depending on the viewpoint of the observer.  He issued two indults that allowed the traditional Mass to be said-- one in 1984, one in 1988.  Both were largely ignored, especially the first one.  And as Pope Benedict would later make clear, no indult was needed to say a Mass that had never been abrogated.  And of course in the background of all of this were relations with the SSPX that ended with the excommunication of six prelates in 1988.  This rift may have been avoided and it remains a block to a true restoration of liturgical and doctrinal affairs.  He issued an encyclical to say that the ordination of women to the priesthood was not possible, and described it as being infallibly defined by the ordinary magisterium of the Church, yet refused to solemnly define it himself.  He developed the Theology of the Body, which imposes a personalist philosophy on traditional Catholic formulations of marriage and procreation.  This approach has attracted many who were stuck in modernism back to Catholic practice, yet has also been something of a novelty that clouds and (some say) inverts the primary and secondary ends of marriage.

First, Fatima.  This most Marian of Popes allowed what can only be called a whitewash of the Third Secret to be released, with much fanfare, in 2000.  This partial revelation has not clarified, and has done much to obscure, the message of Our Lady as to the conflict in our times.

Secondly, the Rosary.  John Paul II wrote much of Our Lady, and wrote so beautifully.  He advocated the Rosary.  He relied on Our Lady's help.  And yet he tinkered with the Rosary as given by Our Lady, and added five new mysteries.  No longer is the Rosary the 153 fishes of the Gospel of John.  No longer is it the Psalmody of 150 Aves.  The Pope just sort of tacked on these mysteries to a formulation that was 800 years old, and which tradition ascribes to Mary herself, who gave it to St. Dominic.  So what?, some would ask.  The answer to that kind of question is the sort of thing that divides the self-described traditionalists from the self-described conservatives.  Kind of a microcosm of the whole deal, in a way.

Other examples of good-or-bad-depending-on-point-of-view items could be cited, which is not surprising in a pontificate of such a length.

In fact, due to the length of his pontificate, its recency, and the undeniable force of personality of John Paul himself, it is almost impossible to adequately consider it.  It is way too soon to make the judgment call of canonization, in my opinion, though of course no one asked for it.  To me, we are standing in this giant footprint, and can see all sorts of good and bad.  But by analogy, this pontificate, as it appears to God, may be like a crop circle that seems like a bunch of smushed corn to the farmer, but in the air spells out a pattern those on the ground cannot comprehend.

The reason for this lengthy introduction is that the upcoming canonization is not without controversy.  Many traditional Catholics worry, because they can see the negatives of his pontificate, and because canonization is typically seen as an exercise of infallibility itself.  Therefore, some are faced with a decision of conscience, in that if the Church canonizes John Paul II it may mean that something is wrong with their understanding of the Church, and/or canonization, and/or John Paul II.

And by canonizing John XXIII and John Paul II, it seems that an effort is being made to "canonize" Vatican II, which (choose one): 1) was a complete disaster; 2) was minimally OK but was turned into a complete disaster by wayward Catholics in the clergy and laity; or 3) wasn't actually a disaster but only because we want a more "mature" faith where no one goes to Church, no one believes anything, no one has a religious vocation, and we're all Protestants anyway so yippee!

I am no theologian, as you have undoubtedly noticed.  But to me, I try to keep it all very simple.  In my view, 1) judging a pope is beyond my pay grade; 2) if canonizations are an exercise of the Church's infallibility, then all that a canonization "defines" is that the saint is in fact in Heaven.  If that means he is in Heaven because of, or despite, his more publicly known actions, it doesn't matter for purposes of the definition.  Of course, a canonization may be prudent or imprudent.  Does it matter if I think a canonization is imprudent?

I believe the Church teaches that, if one is properly disposed, receiving the Sacrament of Extreme Unction can remove all temporal punishment due to sin, freeing one to go 'straight' to heaven upon death. See, "Anointing, The Sacrament of Healing and Mercy" by Fr. John A. Hardon, S.J.
Thus, it is logically consistent with Church teaching, as you hint thetimman, to simultaneously believe that Blessed John Paul II made errors, some even serious, in his lifetime, and yet, to be in heaven. Same thing with Blessed John XXIII.
Perhaps the counter argument is that official canonization means more than simply that a person is in heaven and may be venerated, but rather, also means that everything the person did or said in his or her lifetime was holy and worthy of our consideration to do likewise. However, this seems absurd and contrary to the historical record of the lives of many of the saints.
Anway, seems to me that the Church can infallibly canonize people who were imperfect at times in their life, yet, in the end responded to the grace of God in such a way that they are in heaven.

And by canonizing John XXIII and John Paul II, it seems that an effort is being made to "canonize" Vatican II, which (choose one): 1) was a complete disaster; 2) was minimally OK but was turned into a complete disaster by wayward Catholics in the clergy and laity; or 3) wasn't actually a disaster but only because we want a more "mature" faith where no one goes to Church, no one believes anything, no one has a religious vocation, and we're all Protestants anyway so yippee!

I've come to an epiphany about the Council of late. The usual narrative is conservatives-versus-liberals. We all know it's more complex than that. But what *is* true is that the two largest camps by far were what we might call the Concilium approach versus the Communio approach (terms that really openly came into vogue later, I concede)...each with its own spectrum and diversity. Wojtyla and Ratzinger were both Communio, but we can see real differences between them more readily now.

But it strikes me now, more than ever, that both schools of thought were fundamentally shaped by Protestantism, mainly because the main powers and cultural currents in the West were dominated by Protestant societies (U.S., U.K., Germany). With the liberals of Concilium, it was liberal Protestantism that chiefly shaped them; but the Communio crowd seems shaped by evangelical Christianity. The latter is traditional on morals and evangelization; but it's low church in its ecclesiology, ecumenism, aesthetics and liturgy.

Popes John Paul II and Francis strike me as exemplars of the latter, in somewhat different ways. But so too are most of even the "good bishops" they each named. Cardinal O'Connor is a perfect example: absolutely fearless on confronting the Culture of Death, but liturgically, a real, almost reckless innovator, and ecumenically, a real enthusiast. (And, like JPII, indifferent in his administration).

And in their own way, the conservative evangelicals of the Communio school seems to have lost confidence in the ability of traditional forms and language of Catholicism to speak to the modern world as much as the liberals did. They merely choose a different strain of Protestantism as a guide, one which would preserve at least the truth claims of the Church and its moral teachings, and yet be able to make a better witness. And note well: When I say these prelates and lay Catholics are shaped by evangelical Protestantism, I'm not necessarily accusing them of heresy, at least not in most cases. I am saying that these sensibilities heavily informed their own in how they shaped the daily life of the Church, its worship, and relationship to the outside world.

That's just my sense, however. But I think there's something to it.