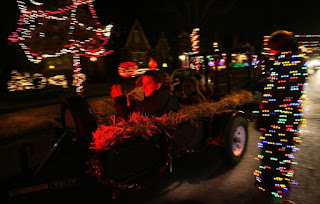 Dear Readers, forgive me.  I love everyone.  I bear malice towards none.  Glory to God in the highest, and peace on earth to men of good will.

But please forgive this pre-Christmas interruption of bah-humbugitude as I sing of Candy Cane Lane...

You might or might not recall from this post from years back that my homestead is not exactly in step with the Christmas decoration schedule of the rest of the neighborhood.  You can read all about it there, but in a nutshell, we try to keep Advent in Advent and Christmas in Christmas.  Hilarity ensues, with our creepy purple Advent lights up for most of December, and Christmas lights blazing in solitude in late January.

Well, things in the neighborhood have only intensified over the years.  STLToday ran a story today on "must see" light displays.  There, along with major displays at the brewery, zoo, Shaw's Garden, Our Lady of the Snows, and Tilles Park, St. Louis Hills' own Candy Cane Lane has its place:

The South City phenomenon all started with one neighbor wrapping his tree trunks in red and white lights, like a candy cane.

The following year, a few others along the 6500 block of Murdoch Avenue co-opted the look. Soon, says the street’s “mayor,” Bob Klasek, the decorations grew to include banners and icicle lights draped high above the road, as well as individual, sometimes overzealous Christmas trimming at each of the block’s 35 homes.

Word spread, and curious visitors started driving by. Now on weekend nights, there are fire pits, an accordion player and a Christmas film projected onto an outdoor screen. Santa mingles with the neighbors, who collect donations for local charities.

Klasek recommends visitors leave their cars at nearby Francis Park and walk through the display to avoid the traffic that backs up to Jamieson Avenue, especially on weekends. While you’re in the neighborhood, take a spin through the nearby streets transformed into Snowflake Lane and Angel Avenue.


It started out simply enough, as the article says. But I don't mean the decorations.  I mean the traffic.

Imagine the Ted Drewes parking lot after a Cardinals game in July, and substitute an automobile for every person.  All on one street.

Except it isn't one street.

Obviously, a car of well-meaning people out for a gander at Christmas lights has to get into the neighborhood.  So do many, many others.  It creates gridlock.  And, since Candy Cane Lane is about 300 feet long, it occurs to these drivers who came from who-knows-where to maybe drive around the neighborhood to see if there are any more cool lights...

And you know what?  There are!  Candy Cane Lane, much like a serial killer, has spawned copycats.  Perhaps the biggest contender is the derivatively-named Snowflake Street (not Snowflake Lane as the article says.  Alliteration!).  Juuuuust close enough to Candy Cane Lane to ensure that your wife won't make it to the hospital on time to deliver your 38th child. How these neighbors managed it I don't know, because there are houses only on one side of the street.  They have appropriated the fence surrounding the school on the other side though.  Blinking, frenzied lights that seem to scream "Girls! Girls! Girls!"

Actually, this rather lovely neighborhood has always been festively lit for Christmas (you know, the time before Christmas), so there is plenty to see.  Including the insane inflatable man south of the park, who inhabits his own Kingdom of the Seasonably Tacky.

My brother, when he found out the topic of this post, said something like this: "I think its really great that a group of neighbors can come together to do something in the spirit of Christmas that is so unifying and fun. Maybe its a little zealous, but I think its great."

You guessed it: he doesn't live in the neighborhood.

Thanks, STLToday, for the publicity.

I always knew I would one day be glad of my survival food and water stash.  I just didn't know why.  I'll be emerging from the bunker on January 2, when it will all be gone.  Who knows? With the warm weather, the Christmas lights might not last through St. Stephen's. I can do this.

Merry Christmas, everyone!
Posted by thetimman at 10:33 AM

In my former neighborhood, everyone used to decorate to the max (it has fallen off somewhat now). The cars of looky-lous would begin in early December and increase to the point that by Christmas Eve it was like a train going by. Had to plan on extra minutes to try to get out of the driveway and then get in the slow line through the neighborhood. So I sympathize with you!

We used to get hundreds of children for Halloween too but now live on a dark country like road with no trick or treaters and no looky-lous although we have a very nice manger scene out front.

We live in a neighboring parish and were just talking about this yesterday, wondering what it must be like to live on that street, and whether the residents knew what they were buying into when they moved there, or if it was more complicated. Sounds like a real hassle, and if you point it out, you're a Scrooge.