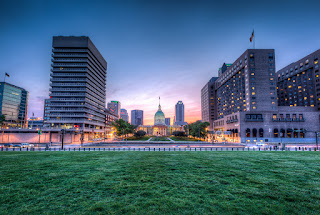 Harry's Restaurant downtown is closing. This comes hard on the heels of the closure of Mike Shannon's. The reason for my post today is to engage local St. Louis readers. I ask you to read the comments of the Owner of Harry's to STLToday, and consider them carefully. Is St. Louis in an irreversible decline, and if not what can be done?

[The owner] cited a familiar scenario: “It’s the economy, the highway closing, Ballpark Village. Downtown is just a dead area right now, unfortunately. Obviously, the sad part is nobody is talking about it. Iconic places are going out of business, and nobody cares.

“Ballpark Village was the nail in the coffin. It shut down Washington Avenue and took 70 percent of our business. We thought it would be more like 10 or 20 percent. It took the people left who were coming to downtown.”

He says the past closing of Highway 40 was a big factor because “St. Louisans are creatures of habit. When it was closed for 2½ years, they went elsewhere.”

Pieri believes there’s a downward swing that will continue until downtown books more conventions and brings crime under control. “People are afraid to come downtown,” he says.

Further to the point, I am going to favorably link to someone I never thought I'd link to here: Gene McNary, who in the aftermath of the Rams departure wrote this proposal in the P-D.

What thinketh ye?
Posted by thetimman at 4:39 PM

Email ThisBlogThis!Share to TwitterShare to FacebookShare to Pinterest
Labels: Church as the Mother of Culture, Local Catholic News, Secular News

Tons of thoughts on this one:

1) Almost no decline is irreversible. Rome was the capital of the world, then it had livestock walking through it streets, now it is one of the most visited places on Earth again.
2) First, St. Louisans have to get over our weird self-hatred of our city. St. Louis is not quite as bad, and other cities not quite as good, as we imagine. We have to start by realizing that other places are often more successful not because of better governance, but because they are near beaches, mountains, or good weather, and people will pay a premium for those things. (That said, we do underutilize the proximity of the Ozarks in selling our region – while not the Rockies, the prettiest territory in Missouri is an hour and a half away, and most St. Louisans do not know that.) Other peer cities like Minneapolis-St. Paul, Columbus, Indianapolis, and Nashville benefit from being their state’s capital – it is amazing how much a city can prosper when it can demand tribute from the other cities. When you look at our apples-to-apples peers, like Omaha, Kansas City, Pittsburgh, and Memphis, those are the ones we might learn something from.
3) Our city is crime-ridden and academically underachieving largely due to the breakdown of the family; it is the job of church and society to fix that, though it would be awfully helpful if government stopped doing things that encourage said breakdown.
4) Regarding what our government can do, unfortunately it seems to focus on frivolities. It has time and resources to light buildings in rainbow colors, remove largely unknown obelisks from the park, and restrict entire lanes of major thoroughfares to use by single-digit numbers of bicycles. What it cannot do is the one thing people across the political spectrum agree is a valid role of government – provide proper security. City government’s first priority should be quality jobs. Its second should be quality jobs, followed by a third of quality jobs. The fourth is security, and the fifth is schools. The first three come first because they provide the tax revenues for the next two.
5) Less important, but only somewhat less important, is that since St. Louis does not have the abovementioned beaches, mountains, and good weather, it has to compete for talent on the basis of a beautiful manmade environment and culture. That means lots of classy architecture, gardens, art, and events. St. Louis also ought to focus on cultural things that would make it distinctive, because regions with a good sense of self-identity are attractive places to visit; some examples would be beer, soccer, chess, or anything else we could realistically be the “capital” of. In the good years, St. Louis is not known to Americans for anything, and in the bad years like 2014, well…

There are non-profits that address virtually everything I have listed above, so as far as what can be done – support them. Use free ways to support them, like school scrip programs, eScrip, Amazon Smile, and GoodSearch. Buy gift cards to some of St. Louis’ more character-filled restaurants and attractions and donate them to your favorite charities to use as fundraising prizes. Write your elected officials actively. Make a list of changes you would like to see in St. Louis, then next to it, write down concrete steps you can take to ever-so-slightly move the needle that direction – people tend to underestimate just how much an individual can accomplish, mainly because we do not spend much time concertedly thinking about it. Most of all, ask our patron saint to pray for our city, that we can become the sterling example he was.

My largely uninformed opinion has always been that cities that are struggling with revitalizing their downtown area are always trying to make it either 1) a place where people will actually live, or 2) a place where tourists will want to visit when neither seems to be the right answer. And so they pour huge amounts of money into loft condominiums and expensive destinations and ignore the crime. They constantly mess with traffic and put rails and bike paths everywhere and generally make it more difficult to actually get anywhere by car and wonder why no one seems eager to go there. They soak businesses and residents through onerous regulations and wonder why buildings are empty. They constantly disparage the counties and their residents and never stop to ask why they left the city in the first place.

Put the focus on making the city clean and safe and make it easy for people to do their business there and the growth will happen organically.

After the Oratory and Catholic opportunity afforded by St. Louis, the main reason I moved here is because this city still have parts that are built to an almost European standard. This standard is diametrically opposed to the modern mindset of the 2.1 children "big" family and one car per driver living out in the nuclear family (families?) in the suburbs. St. Louis was not built for this lifestyle inside of the River des Peres "ring." North St. Louis certainly wasn't. To re-fill St. Louis and make it a vibrant place will either require massive destruction and rebuilding to a completely new image (which would be quite a loss of some of our true beauty) or it will require a return to the traditional family and community built upon that.

Basing gentrification upon sodomitical unions and cohabiting childless couples is unsustainable yet look how many neighborhoods have been "saved" by this over the recent decades in St. Louis. Our Mayor, besides losing NFL teams on the taxpayer dime has made it a priority to try and erase any trace of this city's Confederate links, illegally "marry" same-sex couples, and celebrate sodomy in an official capacity (right across the street from Our Lord at St. Johns, I might add!) and to allow demon worship to be publicly celebrated on Corpus Christi or near it year after year in a public park.

I've yet to see any revitalization plan that calls for the demolishing of the shrine to Moloch on Forest Park Ave, really encouraging families and discouraging (if not outright prosecuting) sodomitcal unions and preventing the public celebration on public property sins that cry out to God for vengeance. A procession of reparation for the whole city would be nice. I'm not even so unrealistic as to expect the Mayor to do it on his knees. But we won't ever see it short of a miracle. And that, I think is what we should pray for. We need a massive conversion/reversion in this city to turn it around. That, or we might as well just take it for granted that we'll have more urban prairies, crime, and we'll lose most of the historic feel that we have left except for some token historic districts.

I have never been to Harry's but my hubby had been with coworkers twice. His assessment was that it was overpriced and had poor service. Also, it was in a weird spot. Not quite downtown. Not midtown. I think if it had been closer to Union Station even, it might have had more traffic. But it was out of the way.

But the crime issue is a real one. No one is going to go downtown for an evening out if you have to deal with pan handlers and criminals. I'll go to the Hill instead.

I do have some thoughts about the McNary proposal. I think some consolidation among local governments in the county may make sense. Breaking up the county in to regions may make sense too. I do not support combining the City and County, as the "Better Together" movement is pushing to do.

Ok. All that said. I paid my ticket.

Since the rebuilding and re-jiggering of highways coming off Poplar St Bridge, how does one get back to IL on Poplar from Downtown after a Cardinal game? There is no ramp to Eastbound highways or to Poplar from Memorial any longer.

All good observations above, but I think putting any hopes on government to do more than help at the fringes of the problem is betting on the wrong horse. Lasting improvement will probably come from an renewed culture, which is an undertaking of church and society. A surge of private volunteerism will move the needle more over the long term.

I never could afford the prices at either place, so their closing does not matter to me. Now when the Majestic closed, that hurt.

Why would the city want to take on the problems that the County has? Ferguson happened in the county, after all.