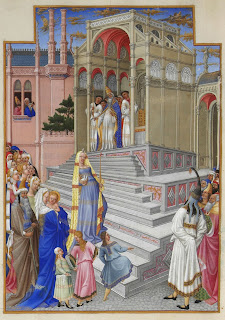 Today is the Feast of the Purification of Mary, or Candlemas, and with it comes the end of the Christmas season, broadly defined.  Take one last day to celebrate the immense love and humility of the Savior before we enter into Lent in this most Lenten of times.

From the Catholic Encyclopedia:


According to the Mosaic law a mother who had given birth to a man-child was considered unclean for seven days; moreover she was to remain three and thirty days "in the blood of her purification"; for a maid-child the time which excluded the mother from sanctuary was even doubled. When the time (forty or eighty days) was over the mother was to "bring to the temple a lamb for a holocaust and a young pigeon or turtle dove for sin"; if she was not able to offer a lamb, she was to take two turtle doves or two pigeons; the priest prayed for her and so she was cleansed. (Leviticus 12:2-8)

Forty days after the birth of Christ Mary complied with this precept of the law, she redeemed her first-born from the temple (Numbers 18:15), and was purified by the prayer of Simeon the just, in the presence of Anna the prophetess (Luke 2:22 sqq.). No doubt this event, the first solemn introduction of Christ into the house of God, was in the earliest times celebrated in the Church of Jerusalem. We find it attested for the first half of the fourth century by the pilgrim of Bordeaux, Egeria or Silvia. The day (14 February) was solemnly kept by a procession to the Constantinian basilica of the Resurrection, a homily on Luke 2:22 sqq., and the Holy Sacrifice. But the feast then had no proper name; it was simply called the fortieth day after Epiphany. This latter circumstance proves that in Jerusalem Epiphany was then the feast of Christ's birth.

From Jerusalem the feast of the fortieth day spread over the entire Church and later on was kept on the 2nd of February, since within the last twenty-five years of the fourth century the Roman feast of Christ's nativity (25 December) was introduced. In Antioch it is attested in 526 (Cedrenus); in the entire Eastern Empire it was introduced by the Emperor Justinian I (542) in thanksgiving for the cessation of the great pestilence which had depopulated the city of Constantinople. In the Greek Church it was called Hypapante tou Kyriou, the meeting (occursus) of the Lord and His mother with Simeon and Anna. The Armenians call it: "The Coming of the Son of God into the Temple" and still keep it on the 14th of February (Tondini di Quaracchi, Calendrier de la Nation Arménienne, 1906, 48); the Copts term it "presentation of the Lord in the Temple" (Nilles, Kal. man., II 571, 643). Perhaps the decree of Justinian gave occasion also to the Roman Church (to Gregory I?) to introduce this feast, but definite information is wanting on this point. The feast appears in the Gelasianum (manuscript tradition of the seventh century) under the new title of Purification of the Blessed Virgin Mary. The procession is not mentioned. Pope Sergius I (687-701) introduced a procession for this day. The Gregorianum (tradition of the eighth century) does not speak of this procession, which fact proves that the procession of Sergius was the ordinary "station", not the liturgical act of today. The feast was certainly not introduced by Pope Gelasius to suppress the excesses of the Lupercalia (Migne, Missale Gothicum, 691), and it spread slowly in the West; it is not found in the "Lectionary" of Silos (650) nor in the "Calendar" (731-741) of Sainte-Geneviève of Paris. In the East it was celebrated as a feast of the Lord; in the West as a feast of Mary; although the "Invitatorium" (Gaude et lætare, Jerusalem, occurrens Deo tuo), the antiphons and responsories remind us of its original conception as a feast of the Lord. The blessing of the candles did not enter into common use before the eleventh century; it has nothing in common with the procession of the Lupercalia. In the Latin Church this feast (Purificatio B.M.V.) is a double of the second class. In the Middle Ages it had an octave in the larger number of dioceses; also today the religious orders whose special object is the veneration of the Mother of God (Carmelites, Servites) and many dioceses (Loreto, the Province of Siena, etc.) celebrate the octave.

Blessing of candles and procession

According to the Roman Missal the celebrant after Terce, in stole and cope of purple colour, standing at the epistle side of the altar, blesses the candles (which must be of beeswax). Having sung or recited the five orations prescribed, he sprinkles and incenses the candles. Then he distributes them to the clergy and laity, whilst the choir sings the canticle of Simeon, "Nunc dimittis". The antiphon "Lumen ad revelationem gentium et gloriam plebis tuæ Israel" is repeated after every verse, according to the medieval custom of singing the antiphons. During the procession which now follows, and at which all the partakers carry lighted candles in their hands, the choir sings the antiphon "Adorna thalamum tuum, Sion", composed by St. John of Damascus, one of the few pieces which, text and music, have been borrowed by the Roman Church from the Greeks. The other antiphons are of Roman origin. The solemn procession represents the entry of Christ, who is the Light of the World, into the Temple of Jerusalem. It forms an essential part of the liturgical services of the day, and must be held in every parochial church where the required ministers can be had. The procession is always kept on 2 February even when the office and Mass of the feast is transferred to 3 February. Before the reform of the Latin liturgy by St. Pius V (1568), in the churches north and west of the Alps this ceremony was more solemn. After the fifth oration a preface was sung. The "Adorna" was preceded by the antiphon "Ave Maria". While now the procession is held inside the church, during the Middle Ages the clergy left the church and visited the cemetery surrounding it. Upon the return of the procession a priest, carrying an image of the Holy Child, met it at the door and entered the church with the clergy, who sang the canticle of Zachary, "Benedictus Dominus Deus Israel". At the conclusion, entering the sanctuary, the choir sang the responsory, "Gaude Maria Virgo" or the prose, "Inviolata" or some other antiphon in honour of the Blessed Virgin.
Posted by thetimman at 1:00 AM

Email ThisBlogThis!Share to TwitterShare to FacebookShare to Pinterest
Labels: Faith Matters, the joy of the faith