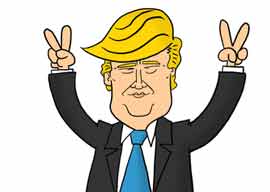 A good opinion piece, by way of praising with faint damnation, by Gavin McInnes.  You'll have to figure out why I posted it on your own.

Future Letter From a Socialist to President Trump

It’s 2019 and the fact that you and Vice President Cruz have decided to run for a second term deeply disturbs those of us who still care about this country. Like many true patriots, my wife and I voted for Sanders in 2016 and considered moving to France when you and that creepy Canadian won. We stayed and we regret it.

In just under four years, you have irrevocably changed this country for the worse. You said you would be hard on immigration and you lied. You let more people in from Western Europe, Canada, and Australia than any other president. While opening the floodgates to the Aryan barbarians, you shut the doors on those who really needed to be here—most notably, Mexicans and refugees. This lead to the death of thousands of Syrians in their home country, not to mention the slaughter of possibly millions of people all over Africa and the Middle East. Angela Merkel picked up the slack and it appears to have driven Germany into a civil war. When asked to atone for these sins you asked the chancellor,
“What’s the German word for brassiere?” and added, "DasShouldStopEmFromFloppin.” This is likely the most ridiculous thing said by any president in history. My wife and I are very well educated, by the way, and we are both familiar with many European words. The German word for brassiere is likely something remarkably similar as English has its roots in German.

Email ThisBlogThis!Share to TwitterShare to FacebookShare to Pinterest
Labels: housekeeping, Humor?, things Jim should read, why do Catholics drink so much?

Hilarious! And so well said. Sums up the socialist mentality quite well.

I don't know if I can, as a Catholic, vote for Trump (probably not), but I'd like to. He's weak on moral issues (I can't quite tell where he stands on abortion, and I think he's fine with same-sex "marriage" which is of great concern), but his economic policies are excellent; better than any other candidate.

Didn't St. Thomas Aquinas say somewhere in the Summa that when we are only presented with less-than-perfect Presidential candidates, it's OK to vote for the least imperfect one?

This is what I've thinking (hoping?) may happen, that Trump wins the nomination and picks Cruz for his running mate. Heads exploding all over the place.

What exactly are Trump's economic polcies? Has he actually said anything besides build a wall, and keep out Muslims? Also, he doesn't owe anyone anything, except for all the people he made deals with to make his millions. EVERYONE SHOULD START THINKING WITH THEIR HEADS, NOT THEIR FEARS. Mary