"Did They Speak Out Against Him, Did They Dare?": Bob Dylan Wins the 2016 Nobel Prize for Literature 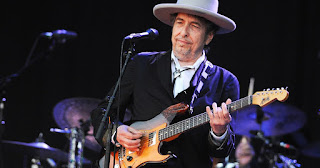 The quote in the post title above comes from Dylan's "In the Garden", from his vastly underappreciated 1980 album Saved.  It refers, of course, to Our Lord, and asks in wonder whether after all He had done and said, that the chief priests had the audacity to speak against Him.

Well, Bob is not Our Lord, but he has been singularly blessed by Him with the gift of poetry in the service of beauty and truth. Still, many speak out against him, how they dare I don't know.

Today it was announced that Bob Dylan is the winner of the 2016 Nobel Prize for Literature.  'Bout time.

There is a very nice write-up on Yahoo News, from which this lengthy excerpt comes:


Stockholm (AFP) - US music legend Bob Dylan, whose songs have influenced generations of fans, won the Nobel Literature Prize on Thursday, the first songwriter to win the prestigious award in a decision that stunned prize watchers.

The 75-year-old was honoured "for having created new poetic expressions within the great American song tradition," the Swedish Academy said.

The choice was met by gasps and a long round of applause from journalists attending the prize announcement. The folk rock singer has been mentioned in Nobel speculation in past years, but was never seen as a serious contender.

Embodying both "the intellectual and popular tradition", he has been influenced by the Delta blues, folk music from the Appalachians and French surrealists like Arthur Rimbaud, she said.

"Dylan has the status of an icon. His influence on contemporary music is profound," the Academy wrote in biographical notes about the famously private singer.

The Nobel is the latest accolade for a singer who has come a long way from his humble beginnings as Robert Allen Zimmerman, born in 1941 in Duluth, Minnesota, who taught himself to play the harmonica, guitar and piano.

Captivated by the music of folksinger Woody Guthrie, Zimmerman changed his name to Bob Dylan -- reportedly after the Welsh poet Dylan Thomas -- and began performing in local nightclubs.

After dropping out of college he moved to New York in 1960. His first album contained only two original songs, but the 1963 breakthrough "The Freewheelin' Bob Dylan" featured a slew of his own work including the classic "Blowin' in the Wind".

Armed with a harmonica and an acoustic guitar, Dylan confronted social injustice, war and racism, quickly becoming a prominent civil rights campaigner -- and recording an astonishing 300 songs in his first three years.

Dylan's first British tour was captured in the classic documentary "Don't Look Back" in 1965 -- the same year he outraged his traditionalist folk fans by using an electric guitar at the Newport Folk Festival on Rhode Island.

The following albums, "Highway 61 Revisited" and "Blonde on Blonde," won rave reviews, but Dylan's career was interrupted in 1966 when he was badly injured in a motorcycle accident, and his recording output slowed in the 1970s.

By the early 1980s his music reflected the performer's born-again Christianity, although this was tempered in successive albums, with many fans seeing a resurgence of his explosive early-career talent in the 1990s.

Since the turn of millennium, as well as his regular recording output and touring, Dylan has also found time to host a regular radio show, the Theme Time Radio Hour, and published a well-received book "Chronicles," in 2004.

He was the focus of at least two more films, Martin Scorsese's 2005 "No Direction Home" and "I'm not There" in 2007 starring Christian Bale, Heath Ledger and Cate Blanchett.

Over the years Dylan has won 11 Grammy awards, as well as one Golden Globe and even an Oscar in 2001, for best original song "Things have Changed" in the movie "Wonder Boys."


From the New York Times, I just post these few excerpts:


“Mr. Dylan’s work remains utterly lacking in conventionality, moral sleight of hand, pop pabulum or sops to his audience,” Bill Wyman, a journalist, wrote in a 2013 Op-Ed essay in The New York Times arguing for Mr. Dylan to get the award. “His lyricism is exquisite; his concerns and subjects are demonstrably timeless; and few poets of any era have seen their work bear more influence.”

Sara Danius, a literary scholar and the permanent secretary of the 18-member Swedish Academy, which awards the prize, called Mr. Dylan “a great poet in the English-speaking tradition” and compared him to Homer and Sappho, whose work was delivered orally. Asked if the decision to award the prize to a musician signaled a broadening in the definition of literature, Ms. Danius jokingly responded, “The times they are a changing, perhaps,” referencing one of Mr. Dylan’s songs.


“As the ’60s wore on,” Giles Harvey wrote in The New York Review of Books in 2010, “Dylan grew increasingly frustrated with what he came to regard as the pious sloganeering and doctrinaire leftist politics of the folk milieu.” He “began writing a kind of visionary nonsense verse, in which the rough, ribald, lawless America of the country’s traditional folk music collided with a surreal ensemble of characters from history, literature, legend, the Bible, and many other places besides.”

Sorry Shakespeare. Bob Dylan is the greatest poet in the English language. 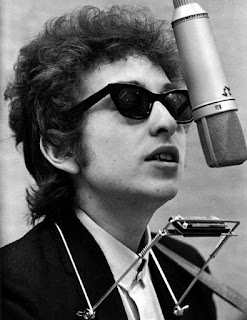 I heard about this on the news and my first thought was that thetimman's whole family is probably thinking "Oh great. There'll be no living with him now."

okay, but Obama won the Nobel Peace Prize after what, a week in office. Shakespear has no worries and Nobels don't mean anything anymore.

When I heard this the other morning, I immediately thought of you, Thetimman. I figured at least one person would be dancing in the streets of St. Louis.

Hi, I am intrigued that a traditional Catholic blogger loves the music of Bob Dylan so much :-). I only know a few of his songs, obviously the most famous ones...could you recommend some more of what you consider his best songs or albums. I want to see what all the hubbub is about. Thanks!

part one of two

Thanks, I'm happy to give suggestions, though it might be a little difficult where to point you first. I think all of Bob's musical "eras" are fantastic, musically and lyrically, but I'll approach the question from the point of view of Catholicity in his poetry. So, here goes:

Dylan broke out in the genre of folk music, some of it political but much of it strongly biblical in inspiration. There is a lot there on the human condition, and grace, but from the point of view of a man who was not yet christian. As long as you approach it from that angle, highly satisfying. Perhaps the best albums in this era are Freewheelin' Bob Dylan and The Times They are a Changing-- though the latter is the most overtly political thing he did.

Next, Bob just sort of dominated rock-n-roll and was way ahead of any trend there. He produced three albums in a year and a half that are considered by most critics, but especially secular critics, as his greatest works. The three are Bringing it all back Home, Highway 61 Revisited, and Blonde on Blonde. If you want musical genius, you could play these three albums exclusively for about three years straight and never tire of them. The lyrics tend to the type of beat poetry, or surrealist thing. Again, once you "get" the Catholicity of Dylan, even these songs are rife with the human struggle for salvation and grace of God. But little overt. They are just excellent music and lyrics that set the pace that every other band followed.

After these, Bob reportedly had a motorcycle accident, took time off, got married, and got happy. He tried intentionally, I think, to lose fans by putting out a country album, a cover album, and in-between a return to folksy but more old-timey little gem called John Wesley Harding. There is some terrific and overtly spiritual stuff on there, including All along the Watchtower and I dreamed I saw St. Augustine. The capstone album of this "happy" faze was New Morning.

Skipping a bit, in the mid-1970s Bob entered his "silver" age (critics say this, but to me there is only gold). He converted to Christianity here, becoming Methodist like his wife. Not evangelical, yet. Blood on the Tracks (1975) is one of his greatest, and gets to the heart of the pain of human relationships gone bad, yet still captures its beauty. I think this might be a good album to hit early in your listening-- it is a type of distillation of Dylan. Shelter from the Storm (which I believe is about the Catholic Church, whether Bob knew it then or not, and which sealed my "Bobversion") is on this album. Fantastic, as is the next album, Desire.

Now in the late 70s, Bob became a flat-out Bible thumping evangelical. Most seculars deride his music from this period, but I love it. Slow Train Coming is a fantastic rock/blues album with seriously Christian songs, and Saved (considered by some his worst album) is the best gospel album I've heard.

In the 80s, mostly, Bob fell into an overproduced 80s type sound. Again, I really like this era, but not where you want to start. In fact, I'll guess that if you really like Dylan this will be the last stuff you get to.

Ok, almost there, and skipping quite a bit. Bob experienced a critically acclaimed renaissance in the late 90s and on into the 2000s. This is where I would send you, if you are looking for seriously Catholic stuff. The album Time Out of Mind is a classic, written by a man who senses his own mortality, seeks grace, is not defiant but rather at peace with himself yet knows he needs the grace of God. His follow ups to that, Love and Theft and Modern Times are also genius and kick a lot of rear. His last original release, Tempest, is awesome, with a few songs that are sublime-- but at this point 2012 his voice sounds like (as my son would say) a cow who had gargled sulfuric acid. To me, fantastic. Lots of blues music throughout his career, but especially in these four albums. The band that backs him is great.

So, to answer your question briefly (ha!), start with Time Out of Mind and Blood on the Tracks. Move to Bringing it all Back Home. Then you have to listen to Love and Theft, Highway 61, and Blonde on Blonde, because they are just great-- especially the latter two, which are better than anyone has ever produced.

Hope that gets you started.

Wow! Thanks so much for taking the time to help me get started! Maybe I am being cynical here, but I wonder, after the dudes at the Vatican were just falling all over themselves to praise David Bowie and Prince, why they weren't more praiseworthy of Dylan's receiving the Nobel...it's obvious he has worked extremely hard and has a prolific body of edifying work...perhaps it's because he became a "Bible-thumping evangelical?" Just wondering...

Ah, yes-- though remember he came off of the evangelical thing. His later work is very incarnational, and I believe he is Catholic, maybe for realsies (he would never talk about his private life) or just in his art.