Homeschool, If You Can, While You Can

Hi, I write a blog called Saint Louis Catholic. And I intend to post original content at least once a year. OK, all kidding aside, sorry again for the pathetic posting rate.

I'm of course late to the game on the Jefferson City "let's pretend that boys who wear girls clothes are girls and pretend that girls who wear boys clothes are boys and that this is all perfectly normal" debacle.  It is disgusting beyond relation OF COURSE that a Catholic diocese would have a policy of admitting students who deny natural law without insisting that such denial not be foisted as reality upon the other students under their charge.

Let's be clear: the Diocese of Jefferson City has declared that it values money (in the form of tuition payments) over Catholic doctrine, the good of souls, the innocence of little children, and common sense.  If that is the case, then what weapons do parents have to protect their children's innocence, stand up for the natural law and the teaching of Christ, and promote common sense?  You guessed it: hit them in the wallet. Don't pay tuition. Don't send your kids-- at significant expense, mind you-- to an anti-Catholic school system posing as Catholic.

This is the Superintendent of Catholic Schools for the Jefferson City Diocese. This is the person in charge of a system that employs nuns (nuns!) to role play sexual perversion with grade school students: 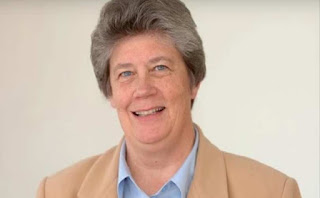 You can't judge a book by its cover, but any serious Catholic who sees a nun dressed like this and yet is surprised by the policy or its implementation is beyond waking up to reality. And I'm not letting the Bishop off the hook. It is 100% on Bishop Gaydos.

This policy needs to change. Will it? Not if the sheep keep allowing the shearing to go on.

And what of public schools?

In the post-Vatican II world (I'm not pining for "good old days" here-- I mean in the recent past), parents used to have the following choice: 1) pay dearly for a Catholic-lite education that wasn't really worth it but protected children from the worst of secularization; or, 2) send children into the public school system armed best as one can but at least also receive the benefit of not paying for the privilege of mangling their faith.

As bad as that was, that choice may no longer exist. The Jeff City example is one of many that prove the Catholic schools aren't Catholic-lite. They are every bit as dangerous as their government counterparts.  And public schools are no longer simply "cost-free" secular indoctrination centers.  They are dangerous interfaces with the anti-Catholic state, as evidenced in the recent news out of Ontario, Canada.

Homeschooling, for however long it is tolerated, is all parents have left. Yes, to do it well is not easy. It requires great sacrifice. And yes, not every parent can or should homeschool, but those who cannot have a greater responsibility to guard their children as they walk that minefield.  Like Bob Dylan says, "There's only one road, and it leads to Calvary."

As homeschooling becomes ever more popular, and ever more children escape the Matrix, the pressure to outlaw it will grow. In this article, one of the dangers identified is precisely that it is harder for the government to intervene in parental educational decisions! Look for trouble if Trump is a one-termer, or who knows, maybe sooner.

And yet, what can we do but make the best of it while we can, for as long as we can, and pray with confidence.

Our Lady of Fatima, pray for us!
Posted by thetimman at 11:18 AM

Two points: First, citing Church Militant as a news source is like citing the Maddow Report. It doesn't exactly enhance your credibility. You won't convince anyone who's not already in your camp. Second, you state that "You can't judge a book by its cover" and then you proceed to do just that. You simply betray your prejudices. Again, you're doing nothing more than preaching to your choir.

I guess that he isn't just preaching to the choir.

You had enough interest to respond.

Where does one start? "Students who deny natural law?" I'm at a loss here - as a parent of a gay child, do I admonish my child who, from early grade school, has been attracted to people of the same sex? It is NOT something I wanted or wished, but as they describe it, it just ... is.

I'm sure you think that being gay is a choice.
A) I'm not sure why someone would choose to be that, and be teased, tormented, beaten, mocked, spit on, rejected, ostracized, ridiculed, condemned ... you get the point. This is a healthy child. Reading how many gay people have committed suicide because of society's reactions to them - is just sad. Do I do as you do, and condemn them for who they are? Do I get a Nobel Prize for kicking my kid out of my house because I can't love what you might call a flawed human, because the principle of the matter is far more important than love?
B) Please tell us readers exactly when YOU chose to be straight. It's a choice, as you would say, so when did you choose that? (If you answer that it wasn't a choice and you were born straight, then can you admit that my child didn't choose this either?) If it is not a choice, are you saying my Heavenly Father created my child this way to be condemned by so many of their peers, and you? Is my child God's mistake? Something like 6% of the world's population is gay - are you saying God is a disaster? Would you be willing to look at my child playing on a swing set and condemn them, as you are here?

Do you want me to prevent my child from being Catholic? If you saw my child play on the playground like all other children do, and study maybe harder than most, are you presuming that he/she has an agenda which they are foisting on their classmates? How clueless can you be??? They're children!

I obviously wouldn't fit through the eye of a needle to get into your version of the Catholic church because of the following: I can't afford to homeschool my children, I'm not the perfect white, middle-class, college-educated suburban homeowner who worships in a space not sheltered from "them." The "Them" to which you often refer seem to be more inner-city dwelling people who actually are surrounded by people of various races, religions, ethnicities, 'foreigners,' impoverished, unemployed or underemployed, and possibly - brace yourself - gay.
Nope, Christ doesn't exist "out there" with them. Just inside your tiny church of highly condemning, judgmental people. Got it.
Signed,
*sigh*

Thanks for your comment. Your caricature of my faith, or life, or opinions does not match reality. I don't judge you or your child, though perhaps you judge me. But I don't want a fight. Of course your child, like every child, should be Catholic. It is the true faith. And God does not create anyone to commit objectively grave sins. The question is whether one conforms to reality or rationalizes it away. Undoubtedly, the cross of a tendency to sins of this kind is a heavy one. Your child needs prayers, the sacraments, and the grace to persevere. As we all do. Why is that tendency in need of resistance any more than a tendency to anger, or gluttony, or other lusts?

The scripture clearly states that sodomy is a sin crying out to heaven for vengeance. Those are frightening words. Do you believe them? And if not, on what basis to you reject them. No one chooses to be "straight". God created man male and female. The law of sexual complementarity is written in the design. And all sexual activity outside of marriage is the matter of grave sin, regardless of the sex one is attracted to. We are all called to chastity consistent with our state in life. Marriage, which Christ elevated to a sacrament, is the only arena where such activity is licit-- there it is part of the beauty of God's plan.

Believe it or not, I don't reject you, your child, or any person struggling with concupiscience and seeking salvation. It is a hard road. God bless you on it.

thetimman,
We will agree to totally disagree on this.
You say that "The law of sexual complementarity is written in the design." My now teenager would agree with that - his/her orientation is written in his/her design - just with someone of the same sex.
I would agree with you as well that I want her to be in a committed marriage with another person, and that the joy of sex would only be within that complementary relationship. Just as our understanding of who God is continues to evolve over time as we mature in wisdom and experience, I hope and pray that the Roman Catholic Church's views on this issue continue to evolve.
[Example - Masturbation used to be considered a "sin" because during St. Augustine's time, "natural law" taught that men carried the baby in their semen, and the woman was only a garden into which the seed would be planted. Masturbation was considered evil because men were thought to be throwing babies out to die by this act. (It shocked the male-dominated church to realize that men and women were equal partners in procreation.)]
Again, because my daughter was born this way, I feel it is a grave injustice for people to be condemning them for acting upon their nature even within a committed, loving relationship/marriage. I'm sure you will condemn this as 'sodomy,' I would suggest that it is a loving act between two people within a marriage.
And I'm sorry that your church is too tiny and too highly critical to accept people who are different than you.
God is love. People find the face of God in love. I hope/pray my child finds God's face through their committed love to another human being. I am not God, so I will not judge.
*sigh*

*sigh*, I pray the Holy Ghost will lead you and your daughter into the truth, and that this will greatly console you. My Church isn't tiny; one, it isn't mine, it's Christ's, and two, it isn't tiny, its universal in time and in eternity. Feelings don't change the truth. You're right, we disagree. But I wish you well. And it doesn't matter what you or I think about what the Church does or does not teach. Her teaching is clear; we accept it or we don't. And then we face the consequences of that decision. God bless you.