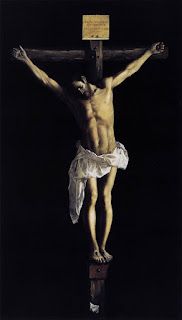 I always get a kick out of people who talk about Bob Dylan's "Christian phase", as though it were a mere artistic mood or artifice from which he emerged in 1983, shaking the dust of it from his feet. Bob Dylan is a poet, and a baptized soul, whose poetry is saturated in God, Christ, the Bible and the moral questions of life.

So, to address both issues, and to help you, dear reader, along the pilgrimage and battle that is human life on earth, I offer this overlooked gem from Dylan's 1980s "wasteland" that the smart set derides: Maybe Someday, from Knocked Out Loaded (1986). Though this album is generally panned, I absolutely love it. Even most critics acknowledge that it contains one certified classic,  Brownsville Girl, but I submit that this one merits some love as well.

Now, as in any work of poetry that is not scripture, there will be some lines here that do not fit the lens in which I ask you to view this. But, apart from one stanza, read these lyrics and consider whether they could not be uttered by Christ, and addressed to the individual soul that He longs to save. In fact read them as though Christ is the singer:

Maybe someday you’ll have nowhere to turn
You’ll look back and wonder ’bout the bridges you have burned
You’ll look back sometime when the lights grow dim
And you’ll see you look much better with me than you do with him
Through hostile cities and unfriendly towns
Thirty pieces of silver, no money down
Maybe someday, you will understand
That something for nothing is everybody’s plan

Maybe someday you’ll remember what you felt
When there was blood on the moon in the cotton belt
When both of us, baby, were going through some sort of a test
Neither one of us could do what we do best
I should have known better, baby, I should have called your bluff
I guess I was too off the handle, not sentimental enough
Maybe someday, you’ll believe me when I say
That I wanted you, baby, in every kind of way

Maybe someday you’ll hear a voice from on high
Sayin’, “For whose sake did you live, for whose sake did you die?”
Forgive me, baby, for what I didn’t do
For not breakin’ down no bedroom door to get at you
Always was a sucker for the right cross
Never wanted to go home ’til the last cent was lost
Maybe someday you will look back and see
That I made it so easy for you to follow me

Maybe someday there’ll be nothing to tell
I’m just as happy as you, baby, I just can’t say it so well
Never slumbered or slept or waited for lightning to strike
There’s no excuse for you to say that we don’t think alike
You said you were goin’ to Frisco, stay a couple of months
I always like San Francisco, I was there for a party once
Maybe someday you’ll see that it’s true
There was no greater love than what I had for you

Helping you along the road through hostile cities and unfriendly towns, to that someday, when you'll hear that voice from on high...
Posted by thetimman at 10:00 AM

Okay, Timman, I tried to imagine Our Lord and Savior singing this. You know the God/Man who redeemed the world, yeah that One. I really did, I even pictured Him singing it from the Cross or as the Cantor at the Holy Sacrifice of the Mass and... I could-not-stop-laughing. Great as you blog is, and the blogs you link to are, this proves that everyone has giant, giant blind spots. Are you associating Robert Zimmerman with some particularly peaceful and happy memories or periods in your life? Jesus singing this? I will be laughing for weeks, probably in my sleep as well. And of course, I will keep reading your blog every day as it has been essential reading for some time now despite your admiration for THEZIMMAN. Have a great weekend.

That is in the running for the best comment I've ever received. Thezimman! Classic.

What a clever person you are!

Now it will be even more fun to live with my husband! :/

Bob and I love bringing joy into people's lives. Therefore I will overlook Noel's Bobsphemy, as I do the unrelenting, Bobnoxious Bobsphemy, of my lovely wife.