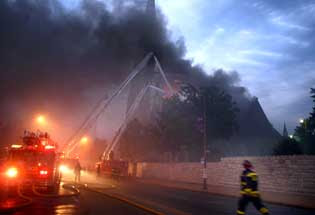 From the story on STLToday:

Andrew Atherton, an elder at the church, said losing the Rock would be "devastating."

"It's just like any other church — it's part of you," Atherton said. "Without that, you're lost."

St. Louis Fire Chief Sherman George said he believed the fire started with a lightning strike. He said the blaze was under control by 9 p.m., about two hours after firefighters arrived. He said that while the walls stayed intact, fire had engulfed the inside.

No one was injured in the blaze, which prompted authorities to close a section of Grand for several hours.George said firefighters tried to battle the blaze from inside but were turned back by heavy smoke and had to rely mostly on aerial trucks. Flames could be seen shooting out of the roof at times.

The building is a Gothic structure, with a towering steeple and flanking spires. The church features an array of stained glass, which was largely spared by the fire.

A former Rock pastor, the Rev. Rick Potts, said he was the last person to leave the church as the fire broke out.

Hundreds of people came to the scene to watch the fire and the battle to contain it. Archbishop Raymond Burke stood with others about two blocks from the church. He called the fire a "great tragedy" and said that church officials are hoping it can be repaired.

(photo above by Sarah Conard of the P-D)
Posted by thetimman at 9:40 AM

Sad news. Where abouts in town was this church? Some STLC readers are not in that fair city.

An act of divine justice?

Like all fires, this one needs to be investigated as well. In this day and age, I don't think I'm being too much of a conspiracy theorist to suspect that something other than "lightning" may have happened here. The fire department IS required to thoroughly investigate this fire, and to make their findings public.

Doppler radar stations record all lightning strikes -- the second that they occur, and the exact spot where they occur. So, it shouldn't be too hard to verify whether or not lightning had anything to do with this blaze.

So, unlike Bill Clinton, churches HAVE been burned during my youth. I hope this didn't happen here.

This is a tragedy for the parishioners and the Redemptorists. This was a magnificent church; here are some recent photos: http://saint-louis.blogspot.com/2007/06/photos-of-saint-alphonsus-liguori-rock.html

I don't think the priest would lie about the cause of the fire being lightning. I was driving in the city yesterday evening and saw some spectacular, powerful lightning bolts.

Also, the fire started at the roof, and the roof is way, way up there. It's not like somebody threw a can of gasoline up there and a match.

To the first anon, it is in the near north side of St. Louis.

To the second anon, I assume you refer to the types of abuses that occurred at Masses there, in that they often resemble pentecostal services. I admit the thought briefly came to me, but I quickly reminded myself that all of us have some share in an expectation of Divine retribution for what has happened to our Church.

Timman -- I didn't realize the priest gave the probable cause of lightning for this fire; I thought the story said the fire chief made that statement.

Anyway, I agree that vandalism is unlikely if the fire started up in the roof.

Jim, sorry, I actually think I cut out the pastor's statement out of the excerpt I posted. No biggie, I was also trying to be a little funny. Humor is tough. I'm working on it.

Has there been any indication as to whether or not this church can be restored or is it a total loss?


Also, what's with all the talk about "elders" at the church?

The church was a disgrace as far as I'm concerned. It was used for a protestanized novus ordo service complete with screaming and hands waving in the air and other carrying on that was more southern Baptist then anything Catholic.