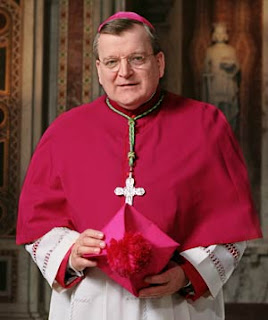 There are some on the internet who have been speculating that His Grace may be selected to head the Apostolic Signatura at some point in the mediate or immediate future. I won't provide the links; feel free to look if you like.
Like all rumors, only time will tell if it is true. However, while considering moves like this can provide a certain level of angst, amusement or other feelings to various persons, I don't want to encourage the exercise here. I don't have the inside sources in Rome necessary to add anything useful to the discussion, so I don't want to write what is rank speculation.
I just wanted to post this in case anyone might look to this space (as a "Saint Louis" site) seeking information.
I pray that God places Archbishop Burke exactly where he is most needed for the good of souls. We are very fortunate to have him while we do. Of course, if it is God's will it would be wonderful for him to be made Cardinal Archbishop of Saint Louis, at least until the white smoke emerges and the announcement is made that he is Pope.
How's that for speculation?
Posted by thetimman at 10:26 AM

How much say does Abp. Burke have in who his replacement will be? (Whenever that is?). Anyone know?

"at least until the white smoke emerges and the announcement is made that he is Pope."

I've thought about this on more than one occasion. It would be interesting to see just how much he would tighten down the screws and also what reaction that tightening would generate.

And though you forgot it in your post I know you haven't forgotten it in your intentions, pray that the Archbishop will be exactly where God wants him to be for the salvation of his own soul. That will best effect our own salvation.