As a Surivivor of This Place, I Can Tell You It Doesn't Increase One's Sanity Quotient 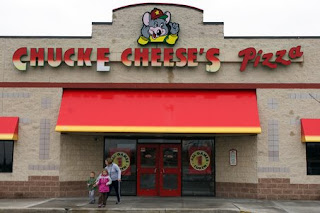 First, the fast-food murders.
Then, the talking-in-a-theater assault.
Now, for your reading amusement and dismay, the Chuck-E-Cheese Thunderdome of Violence.
From Penn Live.com:
Conduct at Chuck E. Cheese described as 'madness'
by MATTHEW KEMENY, Of The Patriot-News
Wednesday January 07, 2009, 1:00 PM
[...]
Susquehanna Township police have been called to the restaurant on Union Deposit Road 12 times in the past year for reports of disorderly conduct, assault and theft. Those calls have resulted in 13 arrests, including six women -- five adults and a juvenile -- charged with disorderly conduct in a Saturday-night brawl.
In 2007, police responded to the restaurant 18 times for similar offenses.
"It's madness, absolute madness," Susquehanna Twp. Police Chief Robert A. Martin said.
Martin said he believes much of the violence stems from ongoing disputes among people who bump into each other in the restaurant. "They see each other at Chuck E. Cheese, and before you know it an argument turns into something physical."
The assaults also could be attributed to separated or divorced parents who attend a child's birthday party, he said. Such was the case in an April 4 incident, when police accused a man of slapping his estranged wife in the head at their child's party.
The violence at Chuck E. Cheese's isn't isolated to the Susquehanna Township restaurant. Last month, the Wall Street Journal published an article about a growing number of adult melees at locations in Brookfield, Wisc.; Topeka, Kan.; Toledo, Ohio; and Flint, Mich.
The number of calls at the Susquehanna Township location increased from 11 in 2005 and nine in 2006, Martin said. In late March, police broke up a fight involving 20 people.
Other Chuck E .Cheese restaurants in central Pennsylvania have had similar problems.
At the Manheim Twp. restaurant in Lancaster County, a man was arrested March 20 after police said he ran around the restaurant spitting and yelling he had hepatitis C. A week earlier, a 17-year-old Warwick Twp. girl was walking to her car in the parking lot when a man walked up behind her, grabbed her and tried to drag her away, police said. No one has been arrested in that incident.
A call to CEC Entertainment, Inc., which runs Chuck E. Cheese, was referred to the company's legal department in Irvine, Texas. Messages left Tuesday morning and afternoon were not returned.
[...]
Incidents reported by police at the Susquehanna Township Chuck E Cheese in the past year:
Jan. 19, 2007: Theft of cell phone
Feb. 16: Domestic dispute
Feb. 19: Domestic assault; one arrested
Feb. 26: Assault
March 22: Disorderly conduct; one arrested
March 29: Disorderly conduct; two arrested
April 2: Disorderly conduct
April 4: Domestic assault; one arrested
May 10: Disorderly conduct; one arrested
Sept. 9: Theft, assault.
Oct. 3: Domestic assault, simple assault; one arrested
Jan. 3: Disorderly conduct; six arrested
Posted by thetimman at 2:17 PM

Well, I've never darkened the doors of a Chuck E. Cheese restaurant, and likely never will. Being a Mom to boys, I get enough loud, rowdy behavior at home, and here it's free. ;)

We've never been to Chuck E. Cheese either and if I have any control over it, never will. Places like these just encourage greed. . .more, more, more tokens pleeeeaaaasssseeee Mom. . . .no thanks!

I haven't been to Chuck E. Cheese in over six years, as we are no longer attend birthday parties there. From the few times I went, I think it is a mad house, and will never go again.

My children hated it so much that they actually begged not to have to go again, after the last time we went! But, they don't like noisy, crowded water parks either.