Patron Saints for Families Called to Holiness in Tough Times 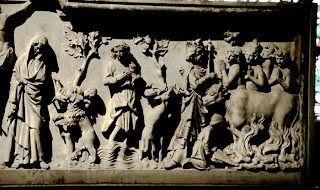 If I haven't mentioned it lately, Dom Prosper Gueranger's The Liturgical Year is an absolute gold mine of spiritual treasures. Though a little pricey, remember it is a fifteen volume work that would be a family heirloom for generations.
Today's feast is that of Saints Marius, Martha, Audifax and Abachum, and the reflection below comes from the breviary and is reprinted by Gueranger. If you are seeking to form and raise a holy family in a time of growing persecution, consider the help of these intercessors:
Marius, a Persian of noble birth, came to Rome, under the emperor Claudius, to venerate the sepulchres of the martyrs in the company of his wife Martha, a noble lady, and their two sons Audifax and Abachum. There they ministered to the Christians in prison, maintaining them both by their wealth and their own personal service, and buried the bodies of the saints.
They were all accordingly arrested, and since they could not be induced by fear or threats to sacrifice to the gods, they were first beaten with clubs, then dragged about with ropes, burnt with hot iron plates and torn with hooks. Lastly their hands were cut off and tied about their necks, and they were led through the city and by the Via Cornelia to the place called Nymphe, thirteen miles from Rome, where they were put to death.
The first to die was Martha, who had earnestly exhorted her husband and sons to bear their sufferings with constancy for the faith of Jesus Christ. Then the others were beheaded in the same sandpit, and their bodies were thrown into the fire.
Felicitas, a noble Roman matron, took them when they were half burned and buried them in her own estate.
Posted by thetimman at 10:19 AM

Here, here on Dom Gueranger's Liturgical Year! Whether read within a family to support and teach the life of the Church, or used on one's one accord during Mass as a missal, these 15 volumes are treasured nourishment for the soul and family.

Aside from being the daily reading material of the Martin family (as in, St. Therese's holy family), Dom Gueranger's works have helped to lift the hearts and minds of souls in many languages throughout the world and for centuries of time.

A must-have for any Catholic household. . .