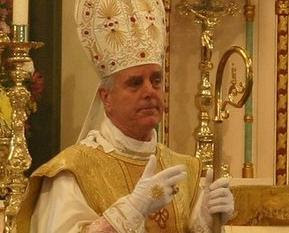 DECLARATION
The Holy Father and my Superior, Bishop Bernard Fellay, have requested that I reconsider the remarks I made on Swedish television four months ago, because their consequences have been so heavy.
Observing these consequences I can truthfully say that I regret having made such remarks, and that if I had known beforehand the full harm and hurt to which they would give rise, especially to the Church, but also to survivors and relatives of victims of injustice under the Third Reich, I would not have made them.
On Swedish television I gave only the opinion (..."I believe"..."I believe"...) of a non-historian, an opinion formed 20 years ago on the basis of evidence then available and rarely expressed in public since. However, the events of recent weeks and the advice of senior members of the Society of St. Pius X have persuaded me of my responsibility for much distress caused. To all souls that took honest scandal from what I said before God I apologise.
As the Holy Father has said, every act of injust violence against one man hurts all mankind.
+Richard Williamson
London, 26 February 2009
Posted by thetimman at 1:17 PM

Nevertheless, there were no gas chambers!

Bp. Williamson says "To all souls who took honest scandal from what I said before God I apologize."

Readers of this blog and defenders of our Archb. Burke know that "scandal" is a very serious predicate in Canon Law.

Is it possible that someone (our own Ab. Burke perhaps) reminded his Excellancy that a fresh excommunication might arise if he doesn't stick to his knitting, tend to his remaining sheep, and stop entering into weird debates about 9/11, and the Holocaust.

(By the way, I do hope Rosemary Ruether agrees to let this man into her big tent theory of Catholicism.)

Anon, "no gas chambers"? How can you know that?

I don't think he uses the word "scandal" in the same way as it is used in canon law, but rather in the ordinary sense of the word.

I think it was an eloquent apology. If only all bishops were so deferential to their superiors!

THERE CERTAINLY WERE SOME GAS CHAMBERS IN NAZI GERMANY

I believe it is well documented beyond a reasonable doubt that the Nazi systematically gassed mentally retarded persons.

Did they also use gas chambers to systematically kill Jews?

There were/are witnesses who said they saw this and helped carry it out.

But, my research has led me to admit that beyond these eyewitness testimonials, the evidence is not strong that the Nazi's systematically used gas chambers to kill Jews.

But I think the eyewitnesses seem to be reliable.

Plus, there is no doubt that the Nazi's knew killing innocent persons on a mass scale was something the German people and the world would not tolerate if it became known. So, the Nazi's went great lengths to cover up their gas chamber crimes.

They did not go to such great lengths to cover up the gas chamber killing of the mentally retarded, so the documentation for that is more abundant.

But, all in all, it is reasonable, I think, and virtually necessary, to conclude that the Nazi's did use gas chambers to systematically kill Jews to some degree.

I think the number of Jews killed in gas chambers is unknown, however, because the Nazi's were determined that no one know.

But it is well established that about 6 million Jews did die at the hands of the Nazi's, though the number who died in gas chambers is unknown.

We have mass killing centers right here in America right now, killing about a million unborn children every year.

There is no doubt about that.

Let's worry about our own virtual denial of the Abortion Holocaust in American--50 million and ongoing.

WE LIVE IN A NAZI STATE.

That is a horrible thing to say, but, we must say it. We must stop being ABORTION HOLOCAUST DENIERS.

We must stop tolerating THIS holocaust denial.

We didn't make the USA a Nazi State. The Democrat Party (and some Republicans) did. It is their fault.

We must get them out of power, once and for all.

The Democrat Party was the chief defender of black slavery prior to 1865.

Now once again they are against all decency, all righteousness, all humanity, the very opposite of what the USA really is.

First we must return to the undiluted Faith. And we must repent of and stop our seriously sinful lives.

Then the Church will become healthy again.

Then the laity of the Church will vote the Party of Death out of office and amend the Constitution so that the Abortion Holocaust can never happen again.