Incardination, Faculties, and the Bozek 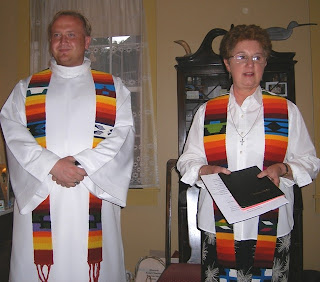 From STLToday:
In a comment to a previous post, Commenter StGuyFawkes asked me [Tim Townsend of the P-D] to run down Father Bozek’s contention that the Reformed Catholic Church and Married Priests Now! had granted him “secondary faculties.” StGuyFawkes suggested there was no such thing.
I asked a canon law professor at Catholic University to explain some of the canonical questions raised by Bozek’s decision to become incardinated into these groups so that his faculties would remain intact in the case of his laicization. The professor, a priest, asked to remain anonymous (I’ve shared his identity with my editors in accord with Post-Dispatch policy.)
Here’s what the canonist wrote in an e-mail:
Tim:
Legally (canonically) speaking, a man becomes a priest through ordination (that is, he receives the sacrament of orders). He is ordained first a deacon and then (six months to a year later) he is ordained a priest. When ordained a deacon, a man becomes incardinated into a diocese (these are diocesan priests such as Fr. Bozek); others, if they belong to a religious order (such as the Franciscans or Jesuits or Dominicans) when they are ordained a deacon, are incardinated into the Franciscans or Jesuits or Dominicans, not into a diocese.
Incardination means that the priest has certain obligations and responsibilities - such as obedience to his bishop - and in turn the bishop has certain obligations and responsibilities - to support his priests and make sure that they fulfill their duties.
Once you are incardinated into a diocese as a deacon, you generally remain incardinated in the same diocese when you are ordained a priest. Every Catholic priest must be incardinated; if a priest wishes to change his incardination (for example, change from the Archdiocese of New York to the Archdiocese of Boston), a legal process must be followed. But he cannot lose his incardination in one diocese without gaining incardination in another diocese at the same time; the priest must always remain incardinated. Thus as you state in your story, Father Bozek is “officially incardinated in the Roman Catholic Diocese of Springfield-Cape Girardeau under the supervision of Bishop James Johnston.” If Father Bozek were to lose “the rights and obligations of the clerical state” (the process which used to be known as ‘laicization’) he would lose his incardination in the Diocese of Springfield-Cape Girardeau; he would not be incardinated anywhere, but in the eyes of the Catholic Church, he could not exercise his ministry legally (that is, licitly)
In addition to being incardinated in a diocese, every priest (generally) is given that which is known as ‘faculties.’ For example, being ordained a priest does not mean that you can hear confessions or witness marriages; in addition to being a priest, you must have authorization from a particular bishop to hear confessions or witness marriages in his diocese. Most diocesan priests have faculties from their diocese of incardination; sometimes, diocesan priests have faculties from two bishops. For example, say Father Smith is a priest incardinated in the Archdiocese of New York but has been assigned to teach at the Seminary in Boston. As a priest incardinated in New York, he could have ‘faculties’ from the Archbishop of New York; as a priest living with permission in Boston (he was assigned to teach in the seminary) then he could also have faculties from the Archbishop of Boston.
From the facts presented in the story, Father Bozek has illegitimately left his diocese of incardination; therefore, his authorization to minister (his faculties) had been removed; he was disobedient to his bishop and thus suffered a penalty, a penalty intended to help him become aware of his responsibilities. The other penalties - his excommunication - are also intended to heal his disobedience.
By becoming affiliated with another group not in full communion with the Catholic Church - either through accepting ‘incardination’ from them (thus establishing a legal bond between him and this group) or receiving ‘faculties’ from them (thus receiving permission to exercise ministry from them), Father is drawing further and further away from the Catholic Church; the Church is attempting to stop him from ministering. In response, he has (possibly) turned to other groups for permission to minister or for some legal bond.
Posted by thetimman at 5:50 PM

Poor Fr. Bozek. He gets all the attention and excommunications... and I hadn't even heard of him until Timman posted. Whereas Nancy Pelosi and Joe Biden are parading around recieveing communion and chatting with the Pope... I personally think there's a slight disconnect here. I can only hope that Archbishop Burke will accomplish some good in Rome in the future; maybe he can somehow stop these politicians and place the emphesis where it really should go: on the forest, not the individual trees.

I posted this evening the following comment to Post Dispatch Tim Townsend's article referenced above. I am asking Tim to investigate why Fr. Bozek did not choose to incardinate with the Polish National Catholic Church? Could it be because the PNCC, although it's mission is to serve Polish immigrants, does not share Marek Bozek's "rainbow" agenda.

My purpose is to underline that Marek Bozek is about gay rights, women priests and BMWs. He could care less about Polish Catholics.

So, to the extent that the canonist answered my question I infer the following:

That has to mean \"incardination\" is a binary relation between one priest and one bishop. Therefore, having two incardinations or two sets of \"secondary faculties\" is kind of like Dean Wormer giving the Animal House fraternity \"double secret probation\". It\'s a joke.

My take is that your canon lawyer is saying that \"secondary faculties\" is a logical contradiction, or at least very peculiar.

On the other hand in the world of \"shadow Catholicism\" this kind of loosey-goosey arrangement where a priest has several bishops may be acceptable.

Tim, I wonder why did Fr. Bozek not just straightforwardly ask for incardination in the Polish National Catholic CHurch. That old denomination is hardy, large and a natural fit since their mission is to serve exclusively a Polish immigrant population. They trace their apostolic succession through Old Catholics of Utrecht and no one has ever questioned the validity of their sacraments.

Does the answer lie in the fact that the PNCC split from the Old Catholics over gay rights and married priests.

THis is the really delicious angle. Bozek betrayed his fellow Poles to align their apostolic succession to a denomination which would accept the new St. Stan\'s congregation of gays and dissidents.

YOu can see in Marek\'s choice of where to get his \"faculties\" the whole political problem. Marek came up from Springfield to start a St. Cronan\'s with better architecture. The old Poles are just starting to figure it out.

As a member of the St. Louis Chancery office told me, \"He stole a parish right out from under us!\"

Tim, ask Fr. Bozek why he didn\'t go with the Polish National Catholic Church who say their Mass in Polish for gosh sakes. Ask him. Tell him that William Bialczak\'s brother told me it was considered by the board to hook up with the PNCC.

Why did he not go in THAT direction?

The answer may be that the PNCC is not \"inclusive\" enough for Marek\'s agenda. That may be the whole story.

And as the Post reported in Christmas week the day Marek arrived at St. Stan\'s, Fr. Gerry Kleba, of St. Cronan\'s was there to greet him personally the day he stepped into the Stan\'s rectory. The Post quoted Fr. Kleba as saying to Bozek in congratulations, \"It\'s no easy thing you are doing.\"

Kleba the apostle to the gays and disenfranchised was the welcoming committee at St. Stan\'s.

That\'s the story right there.

The simple question. Why not the PNCC?

You are the reporter. Ask him. Ask him in Polish. Why not the PNCC?

Does anyone have the link to the pdf's of the original documentation of Saint Stanislaus? I thought it used to be at http://www.archstl.org/parishes/documents/st_stanislaus.html (per wikipedia). They showed the original bylaws and terms of the Church under the Diocese. Thanks. -Bob-