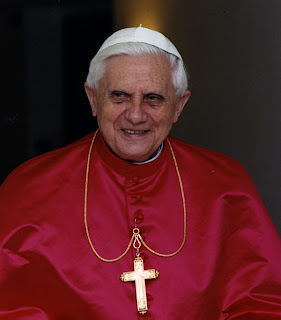 Don't think I've gone soft-- no one would like to see Nancy Pelosi's rear bouncing down the steps from the Apostolic Palace more than I. But one of the responsibilities of a Head of State is to meet with political leaders from other States. Unfortunately for us all, Nancy Pelosi qualifies.

But here is the astute move of the Holy Father: he does not allow photographers or reporters in to the meeting. No congratulatory photo-op for Pelosi, no propaganda tool to prop up her theology of convenience. No reporter to give his lefty-spin on proceedings.
Great. But the Holy Father does better than mere press silence. Instead, the Vatican issues the one and only account of the meeting, publishing the Holy Father's unmistakably clear admonition that Catholic politicians must defend life. Pelosi can no longer claim to be confused about Catholic teaching on this issue or her duties by this teaching in the political sphere. Her claims were never credible; now they are nonexistent.
Hope she enjoyed the meeting otherwise. Perhaps she may even consider listening to the Pope for a change.
Now if we can keep her away from the Austrian bishops before she comes home-- they might tell her to continue to disobey the Pope.
From Breitbart.com:
Pope: Catholic politicians must protect life
By VICTOR L. SIMPSON
Associated Press Writer
VATICAN CITY (AP) - Pope Benedict XVI on Wednesday told U.S. Speaker of the House Nancy Pelosi, a Catholic who supports abortion rights, that Catholic politicians have a duty to protect life "at all stages of its development," the Vatican said.
Pelosi is the first top Democrat to meet with Benedict since the election of Barack Obama, who won a majority of the Catholic vote despite differences with the Vatican on abortion.
The Vatican released remarks by the pope to Pelosi, saying Benedict spoke of the church's teaching "on the dignity of human life from conception to natural death." That is an expression often used by the pope when expressing opposition to abortion.
Benedict said all Catholics—especially legislators, jurists and political leaders—should work to create "a just system of laws capable of protecting human life at all stages of its development."
Pelosi could not immediately be reached after the 15-minute meeting, which was closed to reporters and photographers. The two met in a small room of a Vatican auditorium after the pope's weekly public audience.
A number of the bishops in the United States have questioned Pelosi's stance on abortion, particularly her theological defense of her support for abortion rights.
Benedict has cautiously welcomed the new Democratic administration, although several American cardinals have sharply criticized its support of abortion rights in a break from former President George W. Bush.
Pelosi had meetings with Italian leaders the past few days, including Premier Silvio Berlusconi.
Posted by thetimman at 8:49 AM

Der Papst strikes again! What a great Pope we have! Also I think he is getting a better hang of this media thing, maybe he can get the Vatican Press Office to take some basic public relations classes. With all the Pontifical Colleges in the world at least one had a PR school right?

I wonder if he told her not to present herself for communion anymore.

Part of the official Vatican press release cannot but amuse. I quote:

"Following the General Audience the Holy Father briefly greeted Mrs Nancy Pelosi, Speaker of the United States House of Representatives, together with
her entourage."

I hope her "entourage" included her canon lawyer.

Fantastic! The Pope did this one more than right.

February 17, 2009 – As Speaker of the House Nancy Pelosi prepares to meet with Pope Benedict tomorrow in Rome, stateside, a nationwide petition project has been launched requesting the Catholic Bishops of the United States to withhold Communion from her and other prominent Catholics in public life that obstinately persist in their dissent from Catholic teaching on serious moral issues.

This nationwide Withholding Communion petition is being launched by Pewsitter.com, a Catholic News Portal. The goal of the petition drive is to gather a least 1 million petitions for presentation to the U.S. Bishops and the Vatican.

The basis for withholding communion is Canon 915, which stipulates that those "obstinately persevering in manifest grave sin are not to be admitted to Holy Communion." Archbishop Burke, the head of the Church's highest court reiterated his view on this subject in a recent interview with LifeSite News dated January 30, 2009, in which he stated, "The person who persists publicly in grave sin is to be denied Holy Communion, and it [Canon Law] doesn't say that the bishop shall decide this. It's an absolute."

Most Catholics don’t know that in addition to Canon 915, Canon law also compels Catholics to take action." Canon 212 S3, states that the Catholic faithful have " ..the right, indeed at times the duty, in keeping with their knowledge, competence and position, to manifest to the sacred Pastors their views on matters which concern the good of the Church." ...

I don't think the Pope did enough. He needs to take action against her or make her bishop do the something (okay sure after a stern warning of course) because she has already been "talked to" and keeps on being a scandal.

Maybe our dear pope did an exorcism on her!