A Respectful Request of the Holy Father 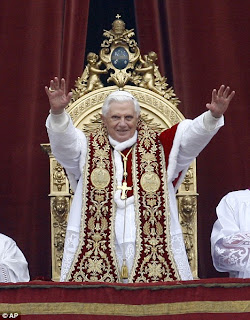 Your Holiness, please, send Father Gerhard Maria Wagner as the new Archbishop of Saint Louis. If they do not want him in Linz, we are happy to take him.
Posted by thetimman at 9:05 PM

And all the people said

Yes, this would be wonderful if it could happen. Personally, the Pope should not have accepted his resignation. It would be nice if Pope Benedict brought him to Rome, made him a bishop and gave him a job in the Curia.

drum roll please - we had been expecting this from you! Amen and Amen.

As a native of New Orleans, the mother diocese of Saint Louis, I find his comments about the devastation caused by flooding in the wake of Hurricane Katrina quite troubling.

Let's suppose for a minute that he is correct, that the flood and its aftermath were a punishment from God for "debauchery." In that case, God hates and chose to punish poor black people, poor Vietnamese people, and upper middle class to rich white people who vote Republican, because those were the neighborhoods absolutely devastated by the flood - New Orleans East, Lakefront, St. Bernard Parish, the now-infamous Lower 9th Ward. On the other hand, God must LOVE homosexuals and rich white people with old money because the historic neighborhoods in the city center - The Garden District, The Marigny Triangle, Faubourg Marigny (aka "The Marigny"), and Bywater, in all of which the old money and gay populations are concentrated, were UNTOUCHED, for the most part, by the devastation, with the exception of limited flooding and a few fires caused by gas leaks.

The French Quarter itself - the original city built by the French in 1718 and re-built by the Spanish in the 1790's - "ground zero" for "debauchery" (notice the quotes) was absolutely spared, with the exception of some minor wind damage, and is 100% intact.

I'm sorry if this man was railroaded out, but his public views do not match up with reality unless God really does hate poor black people, poor Vietnamese people, and rich white people who vote Republican. I would expect such ignorance from an anti-Catholic Baptist preacher in Mississippi, but from a priest and episcopal candidate in Austria? 'Nuff said.

New Orleans has a long and fascinating Catholic history. I would advise this priest to read and understand it before pronouncing judgment.

I think that the comments of Father Wagner would need to be examined in context.

It is seen in scripture that when God chose to chastise people or places, His decision affected the good and the bad alike. Similarly our Lady at Akita and other places stated that the coming chastisement would affect the good as well as the bad.

And in a real sense, our sinfulness is what caused, and causes, the evils of the world.

I don't know what he meant when he said the comment about Katrina, but certainly there is a way to reconcile such a statment so it is not a piece of crack-pottery. Unless you can build the case, charity and justice demand giving him the benefit of the doubt, don't you think?

The devastation of the flooding of the city of New Orleans in August, 2005, DISPROPORTIONATELY affected those who could least afford to be affected by it: the sick and the poor who could not escape the city. Personally, I know of a lady with Alzheimer's who drowned in a nursing home. Her family had placed her there while they "temporarily" evacuated and planned to return for her a few days later. Too bad-she drowned. Ironically, she had spent her life as a swimming instructor.

Any account of this as a punishment from God is a travesty of justice, a grave lack of charity, and a misunderstanding of the situation.

Shame on you for your lack of charity for the suffering.

You should really read my comment a little more carefully before leveling such cheap shots.

In charity to you, I will leave it at that.