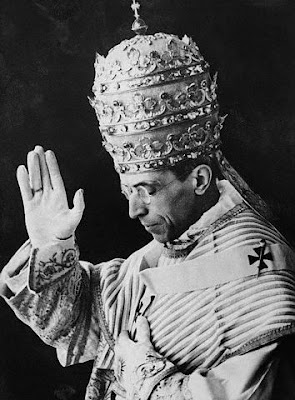 Interesting story in the UK Telegraph about Vatican contingency plans had Hitler carried out his plans for kidnapping Pope Pius XII.
Why would Hitler want to kidnap "Hitler's Pope", you ask? From the article:
General Karl Otto Wolff, an SS general, was told to "occupy as soon as possible the Vatican, secure the archives and art treasures and transfer the Pope, together with the Curia so that they cannot fall into the hands of the Allies and exert a political influence."
Hitler ordered the kidnapping, according to historians, because he feared that Pius would further criticise the Nazis' treatment of the Jews.
Pius XII, in addition to being extremely holy, was also pretty smart. He had apparently executed a resignation letter to be effective if and when captured by the Nazis.
"Pius said 'if they want to arrest me they will have to drag me from the Vatican'," said Peter Gumpel, the German Jesuit priest who is in charge of researching whether Pius should be made a saint, and therefore has access to secret Vatican archives.
Pius, who was Pope throughout the war, told his advisers "the person who would leave the under these conditions would not be Pius XII but Eugenio Pacelli" – his name before he was elected Pontiff – thus giving permission for a new Pope to be elected.
"It would have been disastrous if the Church had been left without an authoritative leader," said Father Gumpel.
A final note in this story, which should interest Fatima devotees, is that the Vatican's plan was to relocate to Portugal.
Posted by thetimman at 4:04 PM

I've done it before on this blog, but I will do it again.

I must recommend "The Myth of Hitler's Pope" by Rabbi Dalin. It is a great read and dispels all of the lies that are perpetuated by the media and the left.

The "kidnapping" is an apocryphal story created by Wolff in order to elevate himself in the eyes of his captors, there is absolutely no other basis or documentary evidence to support it. It should probably be noted that it was Hitler who personally forbade any fighting in or around Rome in order that this great cultural center be spared the ravages of war. If only the British and Americans had been so considerate at Monte Casino or Dresden. No, if you like visiting the Vatican or the Cathedrals of Europe you can thank Adolph Hitler and the Waffen SS for preserving them from the Soviet juggernaut. If not for them they would not be there today.