Inquisition-- in the Best Sense of The Term 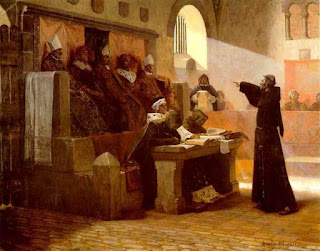 Back in late 2007 when I posted the "It's Time to Do Something about St. Cronan's" post, I wrote from a sense of indignation at the way our Archbishop was being maligned and treated with contumely, and also from a sense of frustration that nothing ever seemed to be done to address the known hotbeds of Catholic dissent.
As it turned out, and certainly coincidentally, from about that time our faithful Archbishop did do something about the situation.  He ultimately exposed the efforts of several should-be leaders of Catholic faithful to lead these same faithful away from the Church and the truth she espouses.  The pretend priestesses, the Bozek, the St. Cronan "pastoral team" as a whole were refuted, called on the carpet, and, when appropriate, disciplined.  A lay member of the pastoral team quit.  Fr. Kleba was summoned to address the situation at the Chancery.  Bozek and the ladies were excommunicated.  And lastly, Sr. Louise Lears was placed under interdict.
The specific catalyst for all of this, in the midst of so much dissent in many areas, was the denial of the infallible truth that women's ordination is ontologically impossible.
Sr. Lears is a member of the Sisters of Charity, which enjoys a reputation of dissent from Catholic teaching and ecclesiastical authority.  The Sisters of Charity belong to one of two confederations of Catholic sisters--the Leadership Conference of Women Religious, or LCWR (the other group is the Council of Major Superiors of Women Religious, or CMSWR).  If you want to get a quick feel for the difference between the two groups, click on the links to their homepages I just gave.  Suffice to say that about the only thing the LCWR has going for it against its rival is a catchier acronym.  It is the group for the "womenpriest" supporters.  The CMSWR members tend to hold Catholic views on the subject.
By way of example, the keynote speaker at the local event "honoring" Sr. Lears this September is a former LCWR president.  The event itself is being hosted by LCWR member group the Sisters of St. Joseph of Carondelet, the order whose high school invited pro-abortion Claire McCaskill to give the commencement speech last year until persuaded by the chancery to rescind the invitation.
As it turns out, the Vatican thinks it is time to do something about the LCWR.  Cardinal Levada, Prefect of the Congregation for the Doctrine of the Faith (formerly known as the Holy Office, and before that, the Inquisition), informed the LCWR that congregation will conduct a doctrinal investigation  focusing on three specific areas.   This is different from the Apostolic Visitation already announced.  From an article in NCR:
The Vatican assessment has become necessary, according to Levada, because at the 2001 meeting between the women’s leadership conference and the Congregation for the Doctrine of the Faith, which took place in Rome, the women were invited “to report on the initiatives taken or planned” to promote the reception of three areas of Vatican doctrinal concern: the 1994 apostolic letter Ordinatio sacerdotalis, the 2000 declaration Dominus Jesus from the Congregation for the Doctrine of the Faith, and “the problem of homosexuality.”
In a nutshell:  Ordinatio Sacerdotalis confirms the unchangeable teaching of the Church on the impossibility of women "priests"; Dominus Iesus confirms the unchangeable teaching of the Church that the fullness of faith subsists in the visible Catholic Church, and that salvation depends upon belonging to it (however unknowingly or imperfectly the saved soul does this); and of course the problem of homosexuality needs no explanation.
The Holy Father has decided that it's time to do something about orders that profess to be Catholic yet reject Catholic teaching.  This is necessary and important.  He deserves our constant prayers.  However, so do those who dissent need our prayers-- these women took vows and were consecrated to an eternal union with Christ, their divine Spouse.  He seeks all who are lost, and this may be the moment for some to heed His voice speaking through His Church.
Posted by thetimman at 8:13 PM

This is awesome! I never thought I would see this.

I pray they will also talk with them about putting back on the Holy Habit of the Church.

In my oponion, our dear teaching sisters are the ones to blame for the confusion of doctrine in the Church today. Thats why so many of our schools set empty and our parishes are closing.

When they kicked the habit, left the convents for "social work", quit believeing the teachings of the Church there was no one left to teach our children. The priest can't to it alone!

If the Archdiocese of St. Louis wants our Catholic Schools to stay open they should invite Holy Habited Nuns to again teach our children.

I shutter to remember the false doctrine I was taught by them in the Archdiocese of St. Louis.

Lets pray for them. It's so easy to return to the Church. I did..

And again you still don't get it!

The Pope is the Vicar of Christ on earth! The earthly voice of Jesus to us His Children. Don't you understand that when the Holy Father speaks, he speaks truth.

Don't you want to go to heaven?

It would seem from your comment that you are outside of the Chruch and you have no idea of what you speak.

You CAN'T be against the Pope and or the teachings and still "belong" to the Church.

Oh yes, there are those who "claim" various chistian thoughts, they are called PROTESTants.

Why? Because they are in PROTEST of....the One, Holy, Catholic, and Apostolic Church. Founded by Christ Himself headed by His Vicar on earth, Pope Benedict XVI.

It's all really very simple.