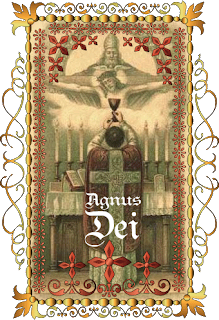 A wonderful article by Bishop Edward Slattery in the Catholic magazine of the Diocese of Tulsa shows what is truly possible in the reverent celebration of any Mass-- whether in the Ordinary or Extraordinary Form.

As many readers of this blog already know, the rubrics of the novus ordo missae presuppose ad orientem worship (meaning the priest facing liturgical East, along with the faithful). Years of versus populum Masses have dimmed the knowledge of this fact, but thanks to the faithfulness of many Catholics over the years and the efforts of Pope Benedict XVI, a resurgence of liturgical reverence and beauty is underway. In Tulsa, Bishop Slattery has announced he will regularly celebrate the Ordinary Form in his Cathedral ad orientem.

Because the Mass is so necessary and fundamental to our Catholic experience, the liturgy is a constant topic in our conversation.

That is why when we get together, we so often reflect upon the prayers and readings, discuss the homily, and – likely as not – argue about the music. The critical element in these conversations is an understanding that we Catholics worship the way we do because of what the Mass is: Christ’s sacrifice, offered under the sacramental signs of bread and wine.

If our conversation about the Mass is going to “make any sense,” then we have to grasp this essential truth: At Mass, Christ joins us to Himself as He offers Himself in sacrifice to the Father for the world’s redemption. We can offer ourselves like this in Him because we have become members of His Body by Baptism. We also want to remember that all of the faithful offer the Eucharistic Sacrifice as members of Christ’s body. It’s incorrect to think that only the priest offers Mass. All the faithful share in the offering, even though the priest has a unique role. He stands “in the person of Christ,” the historic Head of the Mystical Body, so that, at Mass, it is the whole body of Christ – Head and members together that make the offering.

From ancient times, the position of the priest and the people reflected this understanding of the Mass, since the people prayed, standing or kneeling, in the place that visibly corresponded to Our Lord’s Body, while the priest at the altar stood at the head as the Head. We formed the whole Christ – Head and members – both sacramentally by Baptism and visibly by our position and posture. Just as importantly, everyone – celebrant and congregation – faced the same direction, since they were united with Christ in offering to the Father Christ’s unique, unrepeatable and acceptable sacrifice.
When we study the most ancient liturgical practices of the Church, we find that the priest and the people faced in the same direction, usually toward the east, in the expectation that when Christ returns, He will return “from the east.” At Mass, the Church keeps vigil, waiting for that return. This single position is called ad orientem, which simply means “toward the east.”

Having the priest and people celebrate Mass ad orientem was the liturgical norm for nearly 18 centuries. There must have been solid reasons for the Church to have held on to this posture for so long. And there were! First of all, the Catholic liturgy has always maintained a marvelous adherence to the Apostolic Tradition. We see the Mass, indeed the whole liturgical expression of the Church’s life, as something which we have received from the Apostles and which we, in turn, are expected to hand on intact. (1 Corinthians 11:23) Secondly, the Church held on to this single eastward position because of the sublime way it reveals the nature of the Mass. Even someone unfamiliar with the Mass who reflected upon the celebrant and the faithful being oriented in the same direction would recognize that the priest stands at the head of the people, sharing in one and the same action, which was – he would note with a moment’s longer reflection – an act of worship.

An innovation with unforeseen consequences:

In the last 40 years, however, this shared orientation was lost; now the priest and the people have become accustomed to facing in opposite directions. The priest faces the people while the people face the priest, even though the Eucharistic Prayer is directed to the Father and not to the people. This innovation was introduced after the Vatican Council II, partly to help the people understand the liturgical action of the Mass by allowing them to see what was going on, and partly as an accommodation to contemporary culture where people who exercise authority are expected to face directly the people they serve, like a teacher sitting behind her desk. Unfortunately this change had a number of unforeseen and largely negative effects. First of all, it was a serious rupture with the Church’s ancient tradition. Secondly, it can give the appearance that the priest and the people were engaged in a conversation about God, rather than the worship of God. Thirdly, it places an inordinate importance on the personality of the celebrant by placing him on a kind of liturgical stage.

Even before his election as the successor to St. Peter, Pope Benedict has been urging us to draw upon the ancient liturgical practice of the Church to recover a more authentic Catholic worship. For that reason, I have restored the venerable ad orientem position when I celebrate Mass at the Cathedral. This change ought not to be misconstrued as the Bishop “turning his back on the faithful,” as if I am being inconsiderate or hostile. Such an interpretation misses the point that, by facing in the same direction, the posture of the celebrant and the congregation make explicit the fact that we journey together to God. Priest and people are on this pilgrimage together. It would also be a mistaken notion to look at the recovery of this ancient tradition as a mere “turning back of the clock.” Pope Benedict has spoken repeatedly of the importance of celebrating Mass ad orientem, but his intention is not to encourage celebrants to become “liturgical antiquarians.” Rather, His Holiness wants us to discover what underlies this ancient tradition and made it viable for so many centuries, namely, the Church’s understanding that the worship of the Mass is primarily and essentially the worship which Christ offers to His Father.

I pray we will soon see this at the Cathedral Basilica (StL) parish where I attend.