A Monarchist States His Case 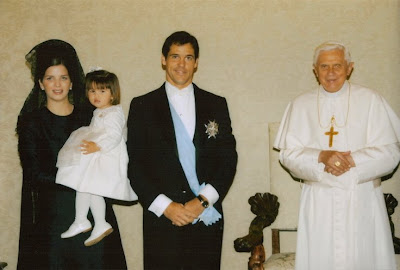 There is a really excellent article in the Remnant Online, the first of a multi-part series, by John C. Medaille, stating the case for being a monarchist in the modern age. This first part compares and contrasts monarchy and democracy in light of his contention that monarchy better represents the will of the people; he then examines the reasons why modern democracies become instruments of oligarchy.

Politically, monarchism has a prestige just a tiny bit better than fascism, but not nearly as respectable as being Amish.

Funny-- and true. But read on:
Therefore, it behooves me to cut directly to the chase, and state very clearly why I am a monarchist: I am a monarchist because I am a democrat. That is, I believe that the will of the people, their traditions and customs, their concern for their families, their communities, and for the future should determine the shape of any political order. And monarchy is the highest form of this democracy.

Tyranny is a degeneration of proper monarchy and generally happens only in degenerate times, and even then, the king has to be speaking for some other and greater force, such as a strong army or a commercial oligarchy. A king, no less than a president, must consider the forces and interests in his kingdom. But a king is free to judge the justice of the arguments; a president is free only to count the votes. And while the president might attempt to engage in persuasion, in the end he himself can only be persuaded by power, that is, by whoever controls the votes, which is very likely to be the one who controls the money. A king may also be persuaded by power and money, but he is always free to be persuaded by justice. And even when a king is a tyrant, he is an identifiable tyrant; much worse is when a people live in a tyranny they may not name, a system where the forms of democracy serve as cover for the reality of tyranny. And that, I believe, is our situation today.

The remainder of this first installment contains a critique of democracy as it exists today. If you have an open mind-- that's if, mind you-- then I suggest you might enjoy the piece.
Read the rest of the article here.

Some of the goofballs that represent the European monarchy don't seem to be the most stable of persons. (Prince Charles and his various marital escapades, the Hohenzollern heirs that seem to spend most of their time appearing in "Vanity Fair" swigging champagne at parties and the continuing soap opera that the royal house of Monaco has been for the last 30 years).
I would question the ability of any of them to govern a kingdom.
And who would be appointed the monarch of the United States, if the citizenry voted to have a monarchy? That could be an ugly situation. Who would be the "identifiable tyrant"? Oh I know, someone like Kim Jong Il, (a real stand up guy who always does right by his people), Saddam Hussein, ( another example of one who always had the best interests of his people at heart, especially the Kurds.) And the great King Abdullah of Saudi Arabia, who loves new ideas and graciously chops the hands off of thieves and the heads off of others, for other serious crimes.
The Remnant has really gone off the rails on this one, but then they've put this stuff out for years. Isn't it great, though, that they can publish their opinions without being killed for it by a king or queen that they've pissed off?

What if a truly Catholic Monarch was to lead our country? While the examples you've given are well know and easily detestable tyrants, let's not forget the equally well know and Sanctified Monarchs that have served Holy Mother Church and their people. Could such a thing happen? God only knows. But if it did, with the Grace of God and the Church, the potential for a true Christian civilization would have immeasurable affects.

Scott, ok, but it seems that democracies of today just wage war, and skip the delicacies of declaring it. This is not inherent in a democracy, except that the here and now predominates in decision making. And of course, that a democracy wages war on a different form of government is hardly a justification. What right do 50.1% of Americans have (though it of course is never voted on directly) to decide the form of government a different country's 50.1%, as they have as a practical matter done in Iraq and Afghanistan and Kosovo-- just to give a recent example set?

"But it is clear to me......that it enthrones the will of determined and well-financed minorities, that it dissolves the customs and traditions of the people, and that it has no concern for the future."

The statement above, true as it is, also describes the rule of Elizabeth I who influenced by Cecil and the other darlings of her court ushered in the Calvinst revolution in England, which dissolved the "customs and traditons of the people" having "no concern for the future."

Juxtaposing this posting with Tim's earlier posting about Elizabeth I, we might conclude that what we are really after is Ultramontanism, or a monarchism under the guidance of the Pope.

Although ultramontanism has always been tempting I've got a better idea.

What I'd go for is a democratic republic where Catholicism's right to teach and instruct the faithful in the ends of citizenship, is forcefully guaranteed by the Constitution.

You are beat. I guess your hopes of being king are over. . .

Thank you for pointing this out. I also like Médaille writings on Distributism. I'm sure I've read less on monarchies as many of you. Practicalities aside, we know that there is no president in heaven, and no first lady, but there is a King and Queen, and the Lord's prime minister is hopefully enjoying a Orange Fanta in Rome... Well it seems best to order things after our eternal homeland.

Some of the goofballs that represent the European monarchy don't seem to be the most stable of persons.

I'd make an argument for the Habsburgs. They certainly don't look so bad after what followed them.

I think part of the problem is in the mutation of Catholic (and not just Catholic, but also Lutheran) support for monarchy into support for absolutism, a more modern development. Medieval monarchies, however, were more limited, and had to account for all kinds of mediating institutions. They were indeed a "moving target," as Scott notes, developing over time.

But I think the ideal (for the state, not the Church) would be a mixed system of government, which incorporates not just monarchy but also aristocracy, democracy, etc. The Venetian Republic is a superb example of such a system, and one which worked very well for some eight centuries (until Bonaparte added it to his list of victims). And it was, of course, a Catholic confessional state, albeit not fanatical one.

I don't understand. John Medaille is also a radical distibutist. How can he support a monarchy without a corresponding landed aristocracy? His monarchy is an absolutist monarchy that prepared the way for the absolutist state. It has nothing to do with the organic monarchy of a St. Louis of France or a King St. Fernando.

"Democracies rarely start wars, when they do it is against autocracies, and they almost always win. There has never, repeat, never, been a war between two democracies."

You've certainly read your York Harding. Is that you Alden Pyle?

On this, check out my blog, the "Anti-Democracy Agenda":

"There has never, repeat, never, been a war between two democracies."

Ever heard of the American Civil War?

OK, that went well. Let me polish the current dialogue between X and Scott without the ad hominem making an appearance.

This first is from X:

Holy Toledo, you think the Civil war was a civil war because the victors called it a Civil War? This is the whole of your problem. Let me clue you in, they (the victors) called it a Civil war because it wasn't a Civil war, how naive can you be? What did you expect them to call it The War of Brutal Northern Conquest to End Self Determination for the Southern States? Not quite as catchy. The southern states had exercised their right to secede, they issued a Declaration of Independence, drew up a formal constitution and elected a President and a congressional body. Sound familiar? The South was not vying for control of the North as well, that would have been a civil war. {Your many degrees don't change the error of your position.]

Egads, you [appear to be] an angry person. Thank you for calling [into question the rectitude of my position]. [I believe a Christian would follow the lead of] Christ[, who did not call names]as He zealously defended the right of a community to brutally enslave whole peoples under a racist pretext. I hope you are as zealous for Christ as you are for the antebellum South...

If you are interested in being a witness for Christ, take St. Peter's advice and do it with charity and hope.[] If you insist on [apprearing] angry and defending a regime that was based on slavery, please hide your Christian identity or you will give people the impression that Christianity is NOT the source of peace, joy, mercy, and justice.

Well, now. Let me have the final word as I close the combox to further comments. X isn't angry, Scott, he is everyone's loveable curmudgeon. He has decided opinions, but is hardly an angry person. Just as he should have not used the word 'stupid' in juxtaposing your intellectual degrees and field of study with his stance that your opinion is clearly incorrect, so, too, you responded by using labels interspersed with argument. I don't think either of you are trying to be uncharitable, so I gutted the rhetoric. Sorry.

As to the question, X happens to be right. The civil war was as much a civil war as the american revolution was. Same template, nearly identical facts. Political subdivisions of a larger country assert right to self-governance, they declare independence, the jilted country seeks to stop this action by military means, the seceding country makes no attempt to take over the other country.

In fact, the Confederacy's claim is somewhat stronger in that its component states had already been acknowledged as sovereign by the foundational documents of the United States. And both countries allowed for slavery under their constitutions.

Your otherwise fine arguments lose something, Scott, when you call the Confederate cause a "racist pretext". That is overly simplistic and moreover factually inaccurate.

IF the north fought that war to end slavery, which it almost certainly did not (and absolutely certainly not at the onset, as any reading of Lincoln's pre-presidential writings and speeches, as well as his first inaugural will show)--IF it did-- that would be no more legitimate than Germany invading the United States in 1794 for the same reason. The issue wasn't the U.S.'s to decide.

Have a great day.